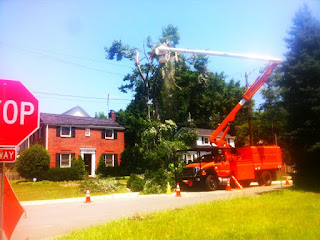 Well, not yet. Whereas many friends are departing for Oregon tomorrow or Sunday for the New Chaucer Society Congress, I don't leave DC until Monday evening. I'll miss the entire first day of the conference, sadly -- and that's especially frustrating since I was on the program committee -- but it can't be helped. The Spouse is attending a board meeting in Aspen (she just texted me from Denver as she awaits her connection). She arrives home around midnight on Sunday, and at least we will have time to have lunch together before I hop my own plane. Meanwhile a very full weekend of swim team banquets and birthday parties for the Daughter, the instigation of a summer health class for the Son -- and who knows what else stretches before me. Flooding rain, according to the weather forecast.

Luckily I have my NCS presentation done. I'll be speaking about the Prismatic Ecologies project, attempting to compress 25 page introduction into a pithy 7-8 minutes. I've decided to deliver a swift rationale, launch into the three "compositions" that frame the essay (adapting one of them to the occasion), and then end with a few suggestive sentences. I also added a gratuitous Chaucer reference in honor of that dead guy under whose auspices we are gathering. All of this will be accomplished to the accompaniment of a PowerPoint, yielding the most colorful seven minutes anyone has spent in a windowless conference room in Portland. Actually, the panel will be great: it's roundtable that includes Rebecca Davis on “Kind Inclinations: Catalog and Agency in Chaucer’s House of Fame,” Lara Farina on “Getting a Feel for The House of Fame,” Alexandra Gillespie presenting “A Multitude of Straws: Thinking about the Organic Matter in Medieval Manuscripts,” Anne F. Harris speaking about “Stone, Bread, Glass,” and Myra J. Seaman's “Reckoning with Divine Things” (and what really bothers me about Myra's paper is that she promised to stop analyzing me in public and yet clearly she is at it again).

So, yeah. It's hard to believe that summer is half over. Much has unfolded, very little of it blogged about, but to give a few highlights: after the derecho I lead a multimedia neighborhood publicity campaign to try to convince our power company that nearly a week into things we were still -- despite the insistence of their computers -- still off the grid. The attention getting posters I made were featured on Fox News (may that be the only way I ever have anything I've done be featured on Fox News) and the local NBC station. Daughter KEC, who at one time was a rather shy youngster, has taken up team swimming (in the Cohen tradition, she has so far placed last at every meet, but is happy to be there), performing magic shows, and building robots. Son Alex has in the absence of the a computer and video games devoted himself to the card game Magic with a passion. I love being home with both of them, even if each day I watch them walk a little farther away from me as they become their own persons. There's sadness in that, even though I know how right it is. I completed the manuscript for Prismatic Ecologies and off it went to the press readers (it is already under contract). I have been plagued by low grade anxiety of unknown origin; it became especially acute last night and kept me awake through the thunderstorms and driving rain. My favorite book of the summer so far is Stephanie Trigg's Shame and Honor; I'll blog about it when I finish. I met with Lindy Elkins-Tanton last week. She and I are co-presenting a keynote at the BABEL conference in September. It was uncanny to talk with someone who is motivated by the same obsessions (catastrophe, temporality, scales of being, the place of the human) who finds her answers through such different types of investigations (she is in Siberia right now working on the chemistry of ancient rocks, and seems to be close to answering the riddle of the Permian extinction). I am wondering how it could happen that my fellowship year has come to its end and I still have no monograph to show for it -- though of course I also know it is because of two edited collections and some keynotes. My plan is to attend the BABEL conference and from that day in September until January 15 become an Utter Hermit and complete the damn book. We will see how that unfolds; I already have my doubts. But I have said no to almost every invitation that has come my way of late.

OK, time to get on to other things. Looking forward to seeing many of you who are reading this in Portland.
Posted by Jeffrey Cohen at 10:50 AM

Sure, blame the toiling wife.

Remember, Wendy, it is always your fault. Always.