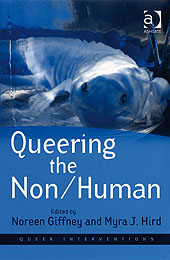 Below an excerpt from a review in Hypatia of the edited collected Queering the Non/Human, for which I composed an Afterword. I don't agree with everything written in this review (I did not find lucidity to be an issue with the volume, and have frequently turned to it for inspiration). I am thrilled, though, to see praised a lively discussion that unfolded on In the Middle and was revised into part of that afterword. All hail the intensifying powers of collaboration. Here is the relevant portion from Merri Lisa Johnson's review:


clarity on what “queering the non/human’’ means arrives late in the book, in the afterword by Jeffrey J. Cohen, of Monster Theory fame, situated as an epigraph drawn from Carolyn Dinshaw:


Queerness . . . makes people stop and look at what they have been taking as natural, and it provokes inquiry into the ways that “nat- ural’’ has been produced by particular discursive matrices of heteronormativity. (quoted on 363)

The afterword is one of the liveliest pieces of writing in the collection, a polylogue that originated on a blog called In the Middle where four scholars debate and refine definitions of the queer, the human, the animal, the aesthetic, and the ethical. The conversation hinges on the question of whether to live according to the “beautiful fictions’’ that ground our lives or whether to “giv[e] up entirely on social structures as they are currently configured,’’ including the fiction of “an entity that can be called ‘the human’’’ (371–72). If queer thought demands we move beyond a duality that would set up human beings “in contra- distinction to a world of inhuman or nonhuman agents and elements,’’ as Cohen proposes, then part of the mission of the book is to position the concept of “humanity’’ under the poststructuralist umbrella covering a growing list of dominant cultural categories—white, male, heterosexual, first world, cisgendered, upper crust, able-normative—exposed by contemporary social theory as sites not only of privilege but also of painful submission to “a constraining and historically limited concept’’ potentially abandoned for “more capacious’’ terms and a “more just,’’ “more beautiful,’’ “more queer’’ world. No one holds onto the status of the human, according to Cohen’s concluding remarks, because “‘being human’ really means endlessly ‘becoming human,’’’ and “holding an uncertain identity, an identity always slipping away from us because always supported through the alliances we make with nonhumans, an identity that at its fullest never ceases to move and change’’ (373–74). This dynamic debate represents some of the finest moments in the collection. It is rich, provocative, and open-ended.

The whole special issue on "Animal Others" is well worth your time -- and right now is a FREE DOWNLOAD. Find it here.
Posted by Jeffrey Cohen at 10:52 AM

My only problem with that volume is the absurd price tag. Something that smart and important needs to be read!

And thanks for the link to the special issue.

Oh, I should have pointed this out, there is also a virtual symposium related to the special issue, that people can participate in over at the Philosophy Compass