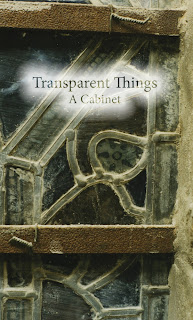 *first, do not miss Karl's post below, "SMITHS NERD," on the round-table in NYC yesterday on Carolyn Dinshaw's new book, How Soon is Now: Medieval Texts, Amateur Readers, and the Queerness of Time


Dear, dear Material Collective: by the time you read this, most of the ideas in these little papers will have moved on, become part of other texts, or not. As works of medieval studies or art history, these essays are incomplete, awkward, and provisional. Some of them may read, to you, to us, like embarrassing teenage poetry. This collection is that dusty box in the basement: it is full of raw, unedited, transparent expressions of affect, of the sort we have learned to hide.
Dear Material Collective, this is a nostalgic love letter to our present and future selves, a little bit of poetry from the past.

And so concludes the Introduction ["Dear Material Collective"], written by Maggie Williams and Karen Overbey, to the small volume, Transparent Things: A Cabinet, just published today by punctum books, comprising 4 essays by Karen Overbey, Jennifer Borland, Angela Bennett Segler, and Nancy Thompson, and originating in a panel organized (by Maggie Williams and Rachel Dressler) for the 1st biennial meeting of BABEL in Austin, Texas in 2010, where the Material Collective, a collaborative of art historians and visual cultural scholars looking for alternative ways to think about objects, first began collectivizing. The panel, and ensuing essays collected in this book, were first inspired by a passage in Nabokov's novel Transparent Things:

When we concentrate on a material object, whatever its situation, the very act of attention may lead to our involuntarily sinking into the history of that object. Novices must learn to skim over matter if they want matter to stay at the exact level of the moment. Transparent things, through which the past shines!

As Maggie and Karen write in their Introduction about that initial conference panel,

For us, as students of medieval material, these tensions between surface and depth, present and past, concentration and skimming are all too familiar. Nabokov vividly evokes the ways in which visual objects entice us with the promise of experiences -- emotional, visceral, mnemonic, intellectual, spiritual. The inherent contradictions of medieval objects, their irreducibility to either the purely intellectual or the merely physical, are at once the dangers and delights of our work. And so this panel offered a dialogue on the question of how our encounters with physical things spark a process and how objects might allow unique collisions between the past and present, the human and inanimate, the practice of history, and lived experience.

And because this panel also presented a nascent moment for the Material Collective, which is invested in lyric, spontaneous, and experimental styles of scholarly writing, as well as a more transparent avowal of the scholar's subject position in her research and writing, the essays in this volume show each writer, "rather than repressing subjectivity and desire," laying it "bare." Thus, in her essay, "Reflections on the Surface, or, Notes for a Tantric Art History," Karen Overbey examines the play between visibility and invisibility in a 13th-century True Cross pendant reliquary, while also asking, "how might we transform our desire for the object? . . . Loosing my grip on expectation. On teleology. Experiencing the fullness of the present." And further, she ruminates:

Desire. I'm thinking of our collective, disciplinary desire to historicize, to pin our material to moments and locales; to make objects into anchors and paperweights, keeping history from blowing around, from blowing away. To define, to defend, to bound. To put under glass. To make disappear the gap between sight and knowledge. To know, by sight. . . . Can we un-desire this?

In her essay, "Encountering the Inauthenthic," Jennifer Borland investigates how we negotiate our material objects of study and their phenomenological effects when they aren't there at all, when they are technically absent -- in an inaccessible place [such as the British Library], distant from the classroom, or present only in "medievalistic" reproductions and re-creations, such as the building of the Ozark Medieval Fortress in Lead Hill, Arkansas [projected completion date: 2030], or by participating in a workshop on making manuscripts using medieval materials and techniques. As Borland argues, first-hand experience of these re-creations can be used, as Christopher Tilley has also argued, "to gain access to the experience of other persons," including those who lived in the past who are seemingly forever cut off from us. For Borland then, better understanding the past is partly a lived, phenomenological, and shared experience that resides in the body in "touch" with certain objects and processes of making objects. This experience, of course, is also partly indescribable and words are not always adequate to its "occasions," and Borland wonders if there might be new scholarly-phenomenological modes, especially in the digital age, that might allow us to "move beyond language," in order to better render how the object serves as the "meeting place" various types of encounters across time. In "Touched for the Very First Time: Losing My Manuscript Virginity," Angela Bennett-Segler describes, in the style of an exhibitionist, her first "physical" encounter with medieval manuscripts in the Bodleian Library, where the touch of a codex "occupies the cohabitation of languages -- or signifying economies -- in a side-by-side existence that is a condition of the experience of jouissance," and where scholarly objectivity is dissolved "into the anonymity of the particpatory community" enclosed in medieval manuscripts. In "Close Encounters with Luminous Objects: Reflections on Studying Stained Glass" [from which essay we culled the image for the cover of the book], Nancy Thompson asks how we can "translate" the often exhilarating first encounters with medieval objects (such as stained-glass windows in medieval cathedrals) into our more dryly-conceptalized scholarly apparatus, which often seems to lead away from the objects that draw us to the study of art history to begin with? How might we reckon with the metaphysical aspects of studying art history: is this a spiritual exercise as much as a scholarly-historical one?

It was the feeling of the editors of this small volume that these 4 essays -- provisional, personal, incomplete -- could likely not be published elsewhere, for they are [supposedly] not really "scholarly" in a conventional-enough way; and yet, it is their very questioning of "proper" scholarly modes, and their confessional modes of address, as well as their thoughtful investigation of alternative ways to approach certain "objects" of study, that this volume is, indeed, philosophical in the best scholarly sense. "Scholarly," because the authors are all trained scholars of medieval culture, and the reflections contained here form an important part of these objects' intellectual history, because to "think" the object -- rigorously, historically, culturally-materially, contextually, etc. -- also means to think its place and agency [if we are concerned with honesty] in relation, not only to its origins [wherever those may be], but also to the lived habits of our thought and practice in the process of encountering the object [again and again]. And this volume does a more than admirable job of that very labor. This also means, as Karen Overbey argues in her essay, that we might consider better what it means "to write the histories of art objects [emphasis on the plural], rather than an art history."

Go HERE to download the open-access volume and/or to purchase a print copy.
Posted by Eileen Joy at 4:06 PM

Thank you so much Eileen for your lovely treatment of the book, and for all your work in making it happen!

Yes, thank you thank you Eileen, for seeing this quirky project through and for helping us share it with everyone - really, can't thank you enough!!

And so much thanks to an intellectual community that engages, supports, fosters and allows the parasitic relationships of people and ideas of all stripes.