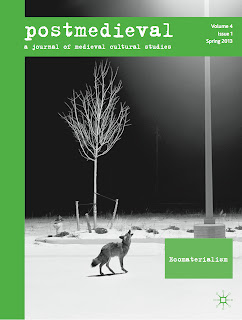 
With its Ginsbergian title invoking the Moloch of industry yet complicating his poetic narrative of lambs and simple ruin, Amy Stein’s Howl makes a sophisticated visual argument through the powerful deployment of the elements: the dark stillness of night air, the vibrancy of gelid water, a quietly blanketed yet far from dormant earth (its pockmarking by weeds is evidence enough of the activity that unfolds at its surface), the fire of what should be natural luminescence transmuted into a lamp for finding cars. No facile narrative of a nature/culture divide here, only imbrication, maybe partnerships. The coyote’s howl resounds across the crowded lots of the world. . . .

What do you see in the clouds? It is not, perhaps, such a bad place from which to begin.

What happens when we do not come in from the cold?

Myra Seaman, Holly Crocker, and I are thrilled to announce the publication today of postmedieval's first issue of 2013: Ecomaterialism, co-edited by Jeffrey Cohen and Lowell Duckert, and featuring a gorgeous collection of essays that take up Jane Bennett's challenge, in Vibrant Matter: The Political Ecology of Things, to "explore the impress and agency of the nonhuman" [and Jane Bennett herself makes an appearance as the Respondent to the issue]. The issue represents some really creative and experimental modes of scholarly writing by contributors who were each asked to take up one of the four elements and/or certain materialities that inhere in the mixed spaces between elements. As Jeffrey and Lowell write,

We chose the primal elements as our focus not because they offer permanence but because they never cease to move. Unlike Lucretian atoms or empyrean forces (gods or physics) -- one too small to be glimpsed, the other too vast -- the four elements are easily apprehensible, the very fabric of mundane experience. Their scale is human, yet their visible agency profoundly challenges our anthropocentricity.

Mapping the elements as they move within their proper temporalities is sobering. Catastrophes precede and follow any stability; failures inevitably arrive. In such moments of perturbation we behold the web of interrelationships that constitutes and sustains our own worldedness. Cataclysms inevitably shatter such ecological meshworks, but failure is an invitation to dwell more carefully, fashion more capacious perspectives, and do better. Environmental criticism recognizes possibility in worldly enmeshment, calling upon us to work toward change, justice. Yet, this ecological entanglement can itself transform the ways we envision, experience and embody environmentality, especially when we realize the potent agency of the nonhuman. Recognizing what Stacy Alaimo (2010) calls ‘trans-corporeality’ and taking seriously its lived consequences is a ceaselessly difficult labor, but we have good maps. Sometimes the past offers a cartography for the future.

Contributors variously address air [Steve Mentz], clouds [Julian Yates], glaciers [Lowell Duckert], fire [Jeffrey Cohen and Stephanie Trigg], water [Sharon O'Dair], earth [Alfred Kentigern Siewers], roads [Valerie Allen], and the abyss [Karl Steel], and all of them call important attention to our "interstitial being" and to the ways in which we define, for ourselves and others, the oikos [both "home" and also the "ground" of ecology]. The collection also represents a marvelous mashup -- or is it a wormhole? -- between premodern and modern histories of the Outside, as well as the ways in which the supposed lines between "inside" and "outside" never stand still. The essays are personal, political, epistemological, cartographical, sexual/sexy, meteorological, atmospheric, oceanic, culinary, ecosemiotic, geophilosophical, whimsical, ecocritical, ontological, meditative, and one even involves the collaboration of a Magic 8 ball. Seriously. In addition to Jane Bennett's response, "The Elements," there is also a book review essay by Vin Nardizzi, "Medieval Ecocriticism." See below for full Table of Contents [and as always, email me -- eileenajoy@gmail.com -- if there's something you feel you just have to have, if you can't get it through your library, and remember, too, that members of the BABEL Working Group are entitled to discounted subscriptions to the journal!]:
Like most Americans, I have spent a good deal of my life around bodies of water, mostly of the tamed, civilized sort, like the beaches of southern California. (When did the tuna leave, Charlie? Who fishes today for scallops from the Second Street Bridge in Long Beach?) But I am convinced of the vital importance to praxis of a watery nature more robust, more generative, than that of the Redneck Riviera, or Malibu. We need watery places where a sand bar swirls and bends and oozes into the water, pushed and pulled by it. Watery places where waves deposit a perfect tiny bivalve, open to the world, pearly-white in the sun, resting just above the tide line. And where those waves, though small, return with such vibrancy that I am moved, every time, to turn them into a line of sparklers, adding all sorts of noises and colors to the water flicking upward and then back into the water. And we need these watery places to bring us up short, even to make us afraid, to imagine in wonder that the army of fiddler crabs, like miniature Lilliputians, might capture a person in the salt marsh and never let go.