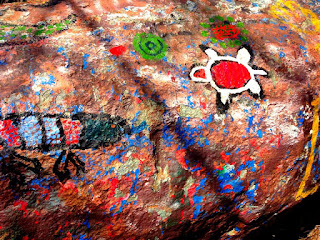 Today, finally, Washington enjoyed spring's warm sun. My daughter and I celebrated the day in the same way that I used to observe spring's arrival with my son: we wandered the meandering banks of Little Falls stream, a sliver of swift water that divides our small neighborhood and forms an interface between urban and indigenous ecologies. When the stream enters our neighborhood its course is confined by a concrete drainage structure erected in the 1940s, but just as it leaves its banks become mud and its bed rocks and sand. Along its side is a small parkland where in March vernal pools form and salamander eggs can (if you probe carefully) be found. We spent an afternoon poking at these pools, overturning leaves, removing trash, thinking about what tracks reveal about unseen animals, listening to birds and the whir of cars.

Not far from the stream, just as it curves to dip under Little Falls Parkway, is a boulder that sits in the quiet of a field, companioned by an ancient pine. It's a glacial erratic, a rock left behind when a sheet of ice retreated millennia ago, an alien presence in that flat expanse. The boulder is irresistible to artists. Although at times the weeds grow so high around it that you have to trample them to gain access, its sides have been painted and repainted for (as far as I can tell) at least forty years. Today when Katherine and I came upon its sun-warmed expanse, we saw that someone had freshly reworked the lithic canvas into faux Australian Aboriginal art. On the one hand, such art is completely out of place. On the other, it resonates with other stories of environmental and social justice that should be told about this small environment's human history: much of the nearby land was once worked by enslaved people, and the area alongside the stream was an expanse where American Indians lived, and the site of a regional trading post.

I've been thinking about ecological interfaces lately because the time has arrived for me to offer the department the description of my fall graduate seminar. It's not easy: I've so enjoyed Environ Body Object Veer that a part of me thinks I should quit teaching now while I'm ahead. After much deliberation, though, I've decided to do an environmental humanities course called "Ecologies of Conquest." Let me know what you think of the description ... and please pass along your suggestions for the readings, primary and secondary

This version of "Literature of the British Archipelago" will gather polyglot texts (in translation) from Britain's postcolonial past around the theme of "Ecologies of Conquest." We will be interested in what happens in contact zones not only among diverse peoples, but among humans and the legions of animal, vegetal, mineral, climatic and topographical nonhumans forming the roiled environment. Primary texts include Beowulf, Gildas, The Life of St Columba of Iona, Voyage of St Brendan, Gerald of Wales (Irish and Welsh writings), Wace, Marie de France, Grettir's saga, and perhaps The Tempest. Secondary texts will be readings in environmental criticism and ecotheory.

This course is open to anyone who wishes to take it, including those whose focus is in later periods. The pedagogy is multimodal and experimental.

Posted by Jeffrey Cohen at 7:17 PM

This sounds wonderful! I'm glad to see Voyage of St Brendan in the list of texts.

This sounds like a wonderful seminar! I absolutely love its emphasis on contact zones involving humans and nonhumans.

As far as ideas go, if you have the opportunity to add another Old Norse text, you might find _Hrolfskraki saga_ to be of interest. It includes compelling contact zones between animal and human, human and otherworldly, etc., and could fit nicely alongside both _Beowulf_ and Marie de France's lays in that respect (it's also relatively short). While not directly British, it refers to many of the characters who appear in _Beowulf_, and it also seems to contain certain parallels to Arthurian legend (however indeliberate they might be).

_Sir Orfeo_ might also work as well, especially given the various environments in which Orfeo finds himself, and also given its zones of contact between human and fairy -- ones that hinge on natural objects (trees, rocks, etc.).

Those are the texts that immediately spring to mind, but if I think of any others (primary or secondary), I'll be sure to pass them along!

Sounds like a great course. Sir Gawain and the Green Knight springs to mind for me; there are some interesting post/colonial tensions to his journey through North Wales, and the rest of the poem for that matter. And, this is more of an extract than a whole text: the moving of Stonehenge from Ireland to England in Robert Mannyng's chronicle. Rhonda Knight has an interesting article on this in JMEMS, a 2002 volume I think.

Looks great! I wonder if the terminological question of "conquest" versus "contact" might be usefully semi-parallel to anthropocene (tragic but human-centered) v homogenocene (disorderly b/c not only human-centered, therefore harder to understand). I don't have a great secondary source for this (besides Charles Mann) but I'm planning to write about it soon-ish.

I've also had some interesting engagements in my early modern eco-globalization seminar with a big archive of travel narratives, creating a dense soupy stew of primary documents that spill into our discussions of Shakespeare, Spenser, Fletcher, etc.

Jeremy Withers wrote his dissertation (Ohio State Univ, 2008) on ecology and warfare, and I think is working on a book version. He published part of his research in ISLE:

"The Ecology of Late Medieval Warfare in Lydgate's The Debate of the Horse, Goose, and Sheep," ISLE: Interdisciplinary Studies in Literature and the Environment. 18:1 (2011): 104-122.

The Wolf Trapper story from McCarthy's The Crossing.