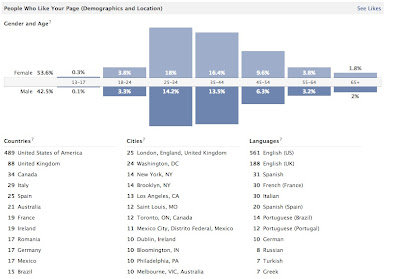 After a restless night (daughter went to the emergency room yesterday with a knee injury, and today is going to reveal much about the extent of the harm done), I awoke early to open my laptop, make coffee, watch the sun start its slow ascent, and enjoy the quiet of the house. I wanted to advertise the fact a great new book is now out from Palgrave: Cosmopolitanism and the Middle Ages, ed. John Ganim and Shayne Aaron Legassie; I've been looking forward to reading it for quite some time, and am happy to see it in print.

While I was on the In the Middle Facebook page, I explored a little of the data offered on those who have "liked" the site. Don't worry: nothing more than general statistics about age, geographical location, and language are offered by FB, with no way to trace the data back to any particular person who likes the page. We won't be hijacking your bank account and making large donations to the BABEL Working Group Champagne Fountain Fund any time soon (provided you send your bank account information, including PIN, to any of the five co-bloggers via private email; we will keep it safe for you, and also share the windfall we recently received from the National Lottery in Nihilterra). A few interesting facts emerged, most of them (upon reflection) commonsensical: that our readership via FB is heavily concentrated in the US, followed by the UK and Canada (anglophone countries that trace the reach of empire) -- but that Italy and Spain should be next (before Australia, even) surprised me, as did the fact that Romania follows so quickly after France and Ireland. London is the city with the largest number of FB likers, followed very closely by Washington DC -- but that's because FB thinks New York City and Brooklyn are separate cities. Some other interesting data: those who like ITM via FB skew towards the younger side of the demographic bar (the 25-34 range is the bulkiest). That actually makes me quite happy as the mission of the blog is future focused, and in that age bracket the future of humanistic study inheres. Readership is also gendered: 53.6% female, 42.5% male. I'm trying to figure out what that means. I'm not sure that the ratio represents the gender ratio of those currently within and entering the field, or just those on FB, or anything at all. But what if male FB users just don't like ITM's mission as much as female ones -- what story would emerge from that? I'm not a statistician, so I can't venture anything but a big question that seems unanswerable.

Now that Google is shutting down its Reader service, many readers of blogs will be looking for new means of access (though I also take the shutting down of the service to indicate that fewer people read blogs now). I switched to Feedly this week; it's OK, but I kind of liked Reader. I am guessing that social media like Facebook and Twitter will become increasingly important as a means of guiding back to blogs those who do not use an RSS subscription service. Already, in fact, more people "enter" ITM via Facebook than through any other source besides Google. Moreover, 817 people subscribe to the ITM feed via Reader; 971 like us on Facebook. Those statistics mean something. They also worry me. Whereas Reader will never pester those who compose blogs to advertise or promote their work (it's simply there for all who want to access it), Facebook is relentless in its begging those who have pages to promote their posts, with the obvious penalty that those who do not will be consigned to invisibility in user feeds. That's too bad. But ITM is not a company; we are out to change the world, true enough, but not really interested in making a stack of cash while doing so. We don't accept paid advertising at this website or via FB, and that policy will never change. We get all the funding we need from readers' bank accounts. For which, thank you.

So, take a look at the statistics above and let me know what else deserves remark. And let me know as well what you guess the future of blogs will be. And if you have a preferred alternative to Google Reader, pass it on!
Posted by Jeffrey Cohen at 7:43 AM

Fwiw, I tend to read it in Pulse reader on various Android devices, and also as a browser plugin for chrome. It works well

+1 on Pulse. I haven't found anything I prefer.

Feeddler works well for iPhone and iPad. I've used FeeddlerPro on my iPhone for quite a while. I like it; its similar to Reader. I haven't found anything yet for my out-dated laptop yet.

I'm not sure that Reader leaving means that blog reading is decreasing. I think they just don't want to support the ad-free service anymore.

I've been reading In the Middle for years now (six, seven?), but for most of that time I've only been able to see the content via Reader because direct access to blogspot has been blocked in China since 2009.

Although I now have a VPN, if that also gets blocked, then there are a whole bunch of blogs, mostly medieval-themed, which I won't be seeing again any time soon.

Reader is convenient both because it's a small window on a world which cannot otherwise be seen from China and because a whole bunch of things are available in one place, not just blogs from blogspot, but WordPress and various other sources as well.