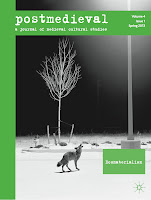 As Eileen announced below, the latest issue of postmedieval on "Ecomaterialism" (ed. Lowell Duckert and yours truly) has been published, and the introduction ("Howl") is a FREE download. Check it out.

I especially love the cover to this postmedieval: the perfect shade of green frames the artwork of Amy Stein. Her Domesticated series (from which "Howl" is taken) has much to say about breaking the nature/culture divide with appropriate measures of seriousness and joy. Her series Stranded is more human in its focus, and even more poignant. She inspired the introduction to the issue through a creation that condensed in visual form every topic over which we had hoped to range.

"Ecomaterialism" was at once a challenge, a pleasure, and the most deeply collaborative project I've undertaken in my career. The idea emerged during an offhand conversation and burgeoned through some emails as Lowell and I realized we were tracing rather similar projects with different elements and wanted to bring others into the conversation. Our dream team of Alf Siewers, Valerie Allen, Steve Mentz, Julian Yates, Sharon O'Dair, Stephanie Trigg and Karl Steel immediately agreed to contribute. Jane Bennett graciously agreed to compose a response essay that brought the disparate strands together, and then in new directions. Vin Nardizzi wrote an awesome review essay. They also took our invitation to creativity and play seriously, producing some fine pieces of analysis as well as astonishing works of art. The issue's conceptualization, execution, editing, and framing -- and the composition of the introduction, much of which took place in real time on two laptops using Google Docs while seated next to each other on my porch -- all these were accomplished with the best thinking and hiking companion it is possible to have: thank you, Lowell. The essay I co-wrote on "Fire" with Stephanie Trigg was an enjoyable and creative piece of shared writing that traced not only some ignitions in Norse sagas but the meeting of two families who felt an immediate affinity. Stephanie was a perfect partner in creating something that (I admit) I found at first intimidating and overwhelming: I thought I had nothing to say about fire, until she proved me very wrong, and I am deeply grateful. 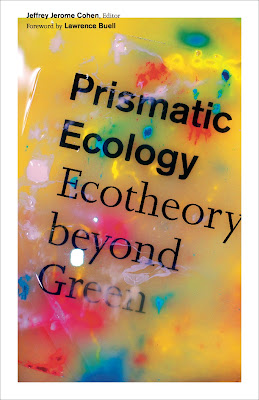 So read the issue, let us know what you think, add your voice to the comments below if you'd like. Many of the contributors to "Ecomaterialism" will be meeting in Tuscaloosa next month for a follow-up called Elemental Ecocriticism. Details on the project we hope to emerge from that confab will appear here soon.

Meanwhile, here is the cover for the forthcoming edited collection Prismatic Ecology: Ecotheory Beyond Green. Look for it this fall from University of Minnesota Press. Complete table of contents here. This cover seems almost synesthesic in its vibrancy, and perfectly captures the thrust of the essays within. All hail the amazing work that graphic artists accomplish.
Posted by Jeffrey Cohen at 7:58 PM