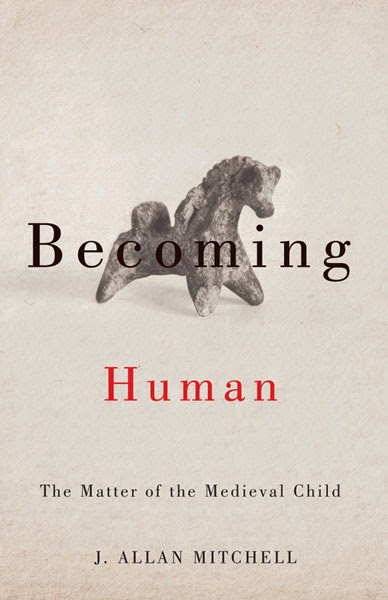 A copy of J. Allan Mitchell's Becoming Human: The Matter of the Medieval Child arrived in the mail a few weeks ago. My impulse was to devour the book immediately, but I made it through only the introduction before I realized that if I did read the book in its entirety I would want to revise, comprehensively, my own. Since Stories of Stone was due to the press in a few days, such changes were not an option and I set Becoming Human aside. My reward for submitting the manuscript to the copyeditor is that I could then pick up the book and lose myself within. No work of scholarship has so engrossed me in a long while.

Becoming Human is one of the best books published in medieval studies in the past decade -- and considering how many excellent works have appeared over that time, that, I think, is very high praise. But medieval literature is far from the book's only purview: anyone interested in materiality, objects, ecocriticism or the posthuman will want to read it. Deftly combining rigorous textual research with deep reading in the new materialism, object oriented philosophy, and ecological theory, Becoming Human offers "a strongly revisionist account of medieval cosmology, ontology, economy and ethics" that divulges how "complicated ecologies underpin even the tidiest of cosmologies" (175). As I attempt description of Mitchell's project, the adjectives that come to mind seem too hyperbolic: scholars are supposed to be sparing in their praise, and are not allowed to end sentences with exclamation points! But Becoming Human is the kind of book that interrupts a field, alters its discourse, then becomes a milestone for shared disciplinary endeavor. Providing a sophisticated yet lucid vocabulary for how the human perpetually comes into being through an entangling world of objects and forces ("the conviviality of animate and inanimate matters"), Mitchell achieves something extraordinarily rare: he pays close attention at once to how texts work (especially as they knot into multiplicity), to how language operates (especially as a force that can implant itself "in the marrow"), to how objects act (refusing to reduce things to cultural props or commodities, following their disruptive vectors) -- all the while remaining attentive to power, temporality, environing, and becoming. Along the way he articulates an incisive model of how the medieval and the modern interrelate. Mitchell's book never worries about the easy periodizations that come to represent the engines of historical change for writers like Greenblatt and Meillassoux. Time -- and human bodies -- are more complicated than such segregations allow:


My methodology has been fundamentally historicist and materialist, if ever oriented towards an eventful historicity that does not come to rest once and for all ... The past is ever emerging on the horizon of the present -- and the present is downstream of still surging histories. I speak of a virtual past that eludes total capture because, empirically speaking, it contains incipient energies and untold futures (175-76)

The book is full of paragraphs like this one, as beautifully crafted as they are compelling. Becoming Human models how to write well about complicated subjects.

Among the topics discussed: the "inchoate moments of gestation anterior to being," whether in the egg within the womb or the egg that might be the cosmos ("One starts talking eggs and ends up addressing the universe," 6); the household as gestational space; humanization as an unfinished process, so that even adults are forever neotenic, forever developing; catastrophe in medieval cosmology as anthropogenic; the pluripotency of medieval matter in its relation to the Big Bang (itself a version of the Cosmic Egg myth); a medieval figurine of a knight on a horse as an object "convivial and compelling in its material facture, eloquent about everyday life and labor" (59) -- and a thing to be thought along with rather than about; toys as unpredictable little Lokis that enchant, disrupt, instruct, defy, enculturate, escape; metals like tin as openers of an ecology of power that descends all the way through the earth's crust; play as the "slough of instrumental value"; an astrolabe as a cosmic orientation device for juveniles; puppets as teachers of posture, discipline, and autonomy's loss; tables as mess makers, where messes are meals (gatherings, performances, theatres, acts of training and consumption) as well as disorders (so many things can go wrong at the table, especially because the tabula is more than a silent support to the activities that unfold above, below and around its structure). With their four legs, incipient energies and carpentered pasts, tables both "stand in excess" of any use value and are always already anthropomorphic -- so that "Humans, strange as it may seem, are not the only anthropomorphic objects around, and any theory that fails to notice that much will remain anthropomorphic in the extreme" (131). A table is affluent (it frees up "powerful flows of matter-energy"), a scene for violence (animals are cut and consumed upon them; tables assist in fragile separations); community making as well as exclusionary (not everyone gets a seat at the table); and productive (they most often make a mess).

There are moments in the text when I wanted more. A brief discussion of the King of Tars (30), for example, would have been the place to explore at greater length how natality does not work in the same way for every body. The moment of being born is the moment of being raced, and the geohumoral determination of national identities fascinated many of the authors considered in Becoming Human. That two of the three surviving medieval metal puppet heads are caricatures of Jews deserves a fuller discussion of the Christian body as norm, versus the Jewish (or "Saracen") body, which might come into being in similar ways but with errors or deviations or disablements that deserve fuller investigation. I also wondered how a consideration of Jewish-Christian commensality might have changed the discussion of tables. Medieval Jews worried about being able to eat what was served when they were guests in such places, and wrote at some length about the kinds of partial and contingent belongings a Christian table might for a short space enable. Gender could also be better foregrounded as specific category of becoming. Some interesting asides about toys for girls, for example, could have been developed -- and it is difficult to think race without thinking gender at the same time.

These are issues for further study that Becoming Human crystallized for me, and I am eager to use its conceptual apparatus to think more deeply about them. And such, ultimately, is why the book is so superb: so many possibilities are opened through its chapters, so many new ways of understanding the Middle Ages, materiality, ecology, power and objects that in its wake so much new work calls out to be undertaken. In the ordinary matter of everyday life Becoming Human reveals the precarious, the parasitic, the challenging, the wondrous. Congratulations to Allan on his achievement. It has been a long time since a book so pulled me into its orbit -- so much so that my first impulse upon finishing Becoming Human was to read it again. The model it offers for committed humanities research that brings together present and past is inspirational.

One starts talking books and ends up addressing the universe. If you are reading this post ... buy the book and become absorbed in it yourself. Post your thoughts about it here. I am eager to hear what others think.

Does anyone know where pictures of the puppet heads from the Thames (especially the two Jewish caricatures) can be sourced? I have found numerous articles and one book chapter discussing them but no actual images.

An image of one of the Jewish puppets may be found in the colored plates included in the book.

PS and its copyright is Museum of London, so that is evidently where it is held.

Aha! Much obliged. Thank you.