First, of course, read Jeffrey on Allan Mitchell's Becoming Human, which I'm co-endorsing as a masterpiece. I'm promising you my own, briefer post on it, now.

Second! A Kalamazoo paper, nearly a month on, from the second Impossible Words session, summarized by Jeffrey like this:


Some fragments: BLISS as an infusion of being as well as a theological colonization of joy (Randy Schiff); places can survive when human settlements do not, so that SURVIVAL is enwrapped in a plural physics, a tale of migration (Dan Remein); an afterlife tells us that our actions have consequences beyond human calculability, beyond SATISFACTION, a knowledge that resonates with ecology's inhumanism (Karl Steel); within the "I" might be excavated a humble flicker of multiplicity to hold onto (Chris Piuma); TOLERANCE operates at every scale and within every discipline (from cancer to justice to botany) and exceeds them, as supplement (Laurie Finke); COMMUNITY is impossibly built of a with (cum-) and an obligation (-munus), we are incapable of paying the debt of distance from self that community demands, and yet a kind of infinite perishing shows another way (George Edmondson); if we are not gobsmacked, then who are we as a COLLECTIVE (Anne Harris)? The Q&A were fantastic, and a topic for next year's roundtable even spontaneously emerged, "Lost Words."

To which I'd only add that the Q/A circled around the horror of collectives. Many of us felt that the call and response of the Material Collective was a bit "creepy." 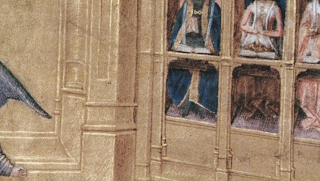 Those of us who do Middle English know that Pearl offers a picture of the “more and more” of God’s grace. In its 101 stanzas -- notably, not the expected 100 -- merely commercial economies, represented so neatly by the grieving jeweler, break open to make way for God’s unending generosity. Pearl teaches us that life, at its best, isn’t fair, and thank goodness for that.

So, Pearl gives us two ways of not being satisfied , the one insufficient, the other beyond sufficiency. We have the disatisfaction of the jeweler, greedy, malcontent, envious, impatient on his side of the river, sad at the death of what might be his daughter, more than a bit jealous that she’s made such a good match; and then there’s God’s infinite unsatisfiability, always able to do more than what’s required, always exceeding what’s on order, an unsatisfiability whose eternal grace keeps on coming, because -- to paraphrase Anselm -- it’s its own cause, its own power, its own necessity.1

But for a fuller picture of God’s unsatisfiability, we have to take another trip to the otherworld, travelling, as you might expect, in the other direction: our guide will also hail from the late fourteenth century, the Middle English translation of the Vision of Tundale, a representative medieval best-seller if ever there was one, with some 150 Latin manuscripts and translations into at least 12 vernaculars. It’s sometimes taught. As you might recall, Tundale’s a wicked Irish merchant, keen on collecting debts, who, after falling into a coma, travels first to hell and then, more briefly, into heaven.

As we might expect, doctrinal debates worried over the justness of such eternal punishment. Hugh of St Victor’s De sacramentis explains that sinners wanted to sin eternally, so of course they should be punished eternally; while Aquinas heaps up a jumble of reasons, including that sin “offends God Who is infinite,” and since “punishment cannot be infinite in intensity, because the creature is incapable of an infinite quality, it must needs be infinite at least in duration.”2 Here, presumably, the antecedent, the it, refers to the duration of both punishment and sinner, who endures, “infinite in duration,” without ever fully dying.

Now, it’s easy to see how the same door that opens to infinite mercy also opens to infinite suffering: God is the sovereign, whose unregulated, self-generated goodness at once establishes and suspends the order of justice, with everything that follows from that.3 But this operation, which, essentially, flips or reverse engineers Schmitt’s Political Theology away from the secular and back towards the theological, makes God human, just as awesome and frightening as any other king.

God’s inhuman infinity requires that we not be satisfied with that. To grasp God’s inhuman horror more fully, we have to get him off his throne and sense the impossible, how he’s invisibly and impalpably everywhere. God’s time is beyond ours; his order beyond ours; his realm one that none of us, at least not here, can penetrate fully: you’ll remember what happens to the Pearl-dreamer when he tries, in his frenzy, to slip across the river, while Tundale just as badly fails in trying to get into the furthest reaches of heaven.

I’m saying that God offers a chance to get totally inhuman. He’s so much more than a sovereign. He--or the divine it--operates at a scale that no human action, no human conceptualization, could ever satisfy. And yet this It still takes an relentless interest, condemning us or saving us according to its own unlimited ends, far beyond anything that we could think just.

Timothy Morton’s Hyperobjects, on the topic of Very Large Finitudes, says that there’s “a real sense in which it is far easier to conceive of 'forever' than very large finitude. Forever makes you feel important. One hundred thousand years makes you wonder whether you can imagine one hundred thousand anything.”4 Fair enough, but here’s a counterproposal: what the afterlife tells us is that our actions have consequences far beyond anything we could ever imagine. Something out there is taking an interest, disproportionate to our comprehension, but proportionate to Its own, rewarding or condemning us according to calculations that we will enjoy, or suffer, undergoing without understanding, and -- given that this is an eternity -- without ever giving us an out. Without ever being satisfied that we will have done enough for It, in It.

Having run my human time out, I’ll leave it to you to develop the ecological consequences.

1 Anselm of Canterbury, Cur Deus Homo, Chapter V, in a dizzying attempt to save God from having something so compulsory as a motive: “God does nothing of necessity, since nothing whatever can coerce or restrain him in his actions. And when we say that God does something by necessity, as it were, of avoiding dishonor--which, in any case, he need not fear--it is better to interpret this as meaning that he does thing from the necessity of preserving his honor. Now this necessity is nothing but his own changeless honor, which he has from himself and not from another, and on that account it is improper to call it necessity.” In Eugene Fairweather, ed, A Scholastic Miscellany: Anselm to Ockham (Philadelphia: Westminster Press, 1956), 150. [see also Aquinas ST 1a 2ae 112 art 1, “Nothing can act beyond its species, since the cause must always be more powerful than its effect. Now the gift of grace surpasses every capability of created nature, since it is nothing short of a partaking of the Divine Nature, which exceeds every other nature. And thus it is impossible that any creature should cause grace.”↩
2 Hugh of Saint Victor, On the Sacraments of the Christian Faith (De Sacramentis), trans. Roy J. Deferrari (Cambridge, MA: Mediaeval Academy of America, 1951), 468. Also see Aquinas ST ss 99, Art. 1, "quia per eam contra Deum, qui est infinitus, peccatur. Unde, cum non posset esse infinita poena per intensionem, quia creatura non est capax alicuius qualitatis infinitae; requiritur quod sit saltem duratione infinita"↩
3 Carl Schmitt, Political Theology: Four Chapters on the Concept of Sovereignty, trans George Schwab (Chicago: University of Chicago Press, 2005), 38. ↩
4 Timothy Morton, Hyperobjects: Philosophy and Ecology After the End of the World (Minneapolis: University of Minnesota Press, 2013), Kindle location 1095. Obviously, medievalists would lean on this point a bit with the way that Very Large Numbers work in, for example, the Chansons de geste.↩

Posted by medievalkarl at 9:15 AM