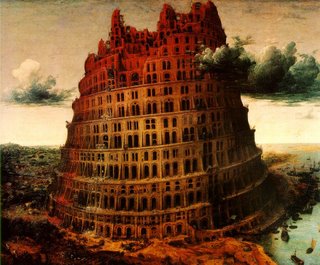 Born of jottings in a lounge in Asheville, launched via inscribed pumpkin on a misfiring medieval trebuchet, the BABEL Working Group is almost too astonishing to be believed. Almost. But because I know Eileen Joy is real -- or at least have some compelling evidence that she is real -- and because I know that BABEL is already sponsoring conference sessions and publishing projects (I have an afterword in a BABEL-affiliated collection, Reality, Television and the Middle Ages and a reprinted piece in another, The Postmodern Beowulf), I am going to stake my academic credibility (such as it is) on the fact that the amazing BABEL website is the future of medieval studies. Or, at least, of interesting medieval studies.

How could we have a collective that could act as a lever for a new discourse within the academy aimed at reformulating and redefining what we think we mean by "humanism" and "the humanities," such that we could also advocate for the important role of humanities study in the post-historical, post-human, hell, post-everything university, and also in public life? We also desired to be able to undertake this venture, as well as engage in various collaborative activities, with scholars working in more modern humanities fields, and also with scientists working in cutting-edge fields such as biotechnologoy, robotics, artificial life, particle physics, etc. It was (and is) our feeling that many of the debates currently ongoing between the modernists, and between the scientists, regarding such subjects as "the future of literary studies" or "the future of the human," could benefit immeasurably from the "long" (or, "longer") historical perspectives of medieval studies, and moreover, medieval studies could benefit by being, not merely poachers of contemporary critical thought, but one of its many co-agitators. Finally, how could we create a space where, following Bill Readings, "the question of being-together is raised, raised with an urgency that proceeds from the absence of the institutional forms (such as the nation-state), which have historically served to mask that question" (The University in Ruins, p. 20). After much scribbling of all of this on Meantime Lounge cocktail napkins, BABEL was born.

Described as "a non-hierarchical scholarly collective, with no leaders or followers, no top and no bottom," the BABEL Working Group has taken as its current project musings upon corporality and posthumanity, topics near and dear to my own heart. Check out the website, and while you're at it glance at Eileen A. Joy's website, too.

I posted recently on the necessity of maintaining a sense of humor even when engaged in reflection upon Utterly Serious Topics (see Tiny Epiphany). The exuberant and cheeky BABEL Working Group delivers a manifesto for a serious and seriously engaged medieval future. Babel on!
Posted by Jeffrey Cohen at 9:28 AM

[Eileen Joy] Well, I think the time has come to publicly acknowledge Jeffrey Cohen's always-very-public scholarly generosity. I never cease to be amazed at Jeffrey's prolific prolixity, of course, but think, too, of how much of that prolixity is spent on lavishing praise on *other* scholars' books, articles, projects, etc. This kind of generosity is, unfortuneately, rare in our field, and while many may rave privately about their favorite subjects, Jeffrey takes the time to make his sentiments more public, and always in a personally heartfelt and brave manner. BABEL does not deserve [yet] the praise Jeffrey gives it, but we'll certainly do our best to live up to it.

On another note, I'm beginning to think that Jeffrey, whom I have never met, is participating with me in an experiment of intellectual symbiosis of which I am unaware. In his posting on BABEL, he mentions our "cheek" as well as the idea of how important it is that we [not just BABEL, but all of "us academics"] never take ourselves too seriously. Just this morning [while stumbling around a very windy and gloomy and rainy Cambridge Univ. city centre, and before reading Jeffrey's post on BABEL], I was going over notes I had made while at medieval congress in Kalamazoo this past May, regarding various ideas/notions/philosophical points I wanted to add to BABEL website and one of them had to do with the importance of BABEL remaining somewhat anti-deological; the other had to do with "humaneness" and "playfulness" (and humor, more generally) as being central to BABEL's objectives. I have since added them to the site, just at the end of our so-called "mission statement."

In what maner may a cristen soule joyne the babel listserv? I kan nat fynde instruccioun on hir website.

a cristen soule may join the BABEL group list-serv by simply emailing Eileen Joy (ejoy@coastal.edu) and asking her to be added. Chaucer is more than welcome.

I'd like to think that heathens as well as cristen soules will be joining BABEL.


Prolific prolixity? Me??? I have a few, longwinded things to say about that ... but for the time being I will simply say, thank you Eileen.

"I'd like to think that heathens as well as cristen soules will be joining BABEL. "

Ye haue a poynte, as alwey, wyse Professir. Pardoun myn slippe -- ich am bounde at leest partiallye by the prejudices of myn tyme and contree.

"a cristen soule may join the BABEL group list-serv by..."

190 Light, by all appearances.

BABEL has always looked up to Front 190 and has avidly followed everything they have done, publishing- and other-wise. If we're "190 Light," that's fine by us. You *are * talking about beer, right? Cheers.

That was sort of a joke, aimed at 190. Apologies if it came across otherwise.