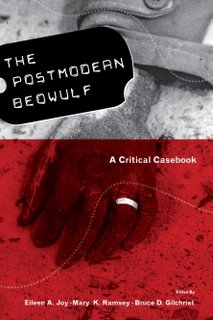 I've mentioned this new book in passing a few times on the pages of this blog. Here is a short excerpt from the preface that well captures the volume's ample ambition, followed by its table of contents. (Yes, the book has both a preface and a substantial introduction called "Liquid Beowulf" [which I've read and it is wonderful]. Eileen Joy must be a terribly prolix person).

Look for The Postmodern Beowulf this autumn via West Virginia University Press.

The attempt to restore historical complexity to our understanding of the past and its cultural forms, and to also show how Old English studies both practice and reformulate theory, suffices as a description of the project of The Postmodern Beowulf, which was initially born out of a desire to provide for students an anthology of “the best of” contemporary critical approaches to the poem and then later developed into a “casebook” that we hope more than amply demonstrates the ways in which Old English scholarship has debated, elucidated, practiced, historicized, and even developed theory in relation to the critical analysis of Beowulf. The book is divided into four sections—History/Historicism, Ethnography/Psychoanalysis, Gender/Identity, and Text/Textuality—that have been designed, not as much to represent specific movements within theory (such as deconstruction, new historicism, post-colonialism, Lacanian analysis, queer studies, and the like), as to offer broad contextual fields of inquiry within which certain questions regarding history, culture, identity, and language have perdured over time (and in response to which questions the more narrowly-defined theoretical “schools” have arisen). This is not to say that specific theoretical approaches are not purposefully highlighted in the volume, because many of them are, but it was also our concern to select essays that took up more than one narrowly-defined approach and that also combined approaches (both traditional and more contemporary) in strikingly innovative ways.

Table of Contents
Preface: Eileen A. Joy, "After Everything, The Postmodern Beowulf"