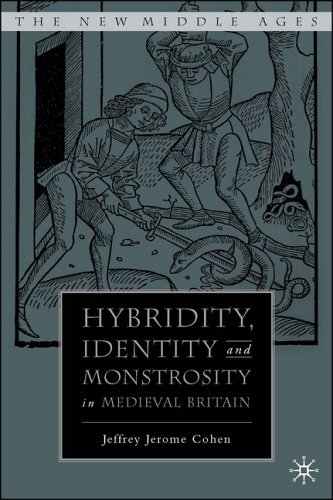 Hybridity, Identity and Monstrosity in Medieval Britain is hot off the press. My usual experience with a new book involves eagerly opening the crisp volume to its first page and -- despite my weeks spent obsessing over copyedited text and galleys -- instantly finding a typo. This time I decided to defeat fate via a circuitous route and opened to the last page of the epilogue ... where I immediately found a typo ("Meier" for the Hebrew name "Meir").

Here is some information on the book, lifted from the Palgrave website. It is priced too high for individual purchase ($75 and certainly not worth every penny), but I do encourage you to request it through your nearest library. Later in the week I will post another excerpt from the work; for a draft of the introduction, look here.

Hybridity, Identity and Monstrosity in Medieval Britain examines an island made turbulent by conquest and civil war. Focusing upon history writing, ethnography, and saints' lives, this book details how community was imagined in the twelfth century; what role the monsterization of the Welsh, Irish and Jews played in bringing about English unity; and how writers who found the blood of two peoples mixed in their bodies struggled to find a vocabulary to express their identity. Its chapters explores the function and origin of myths like the unity and separateness of the English, the barbarism of the Celtic Fringe, the innate desire of Jews to murder Christian children as part of their Pesach ritual. Populated by wonders like a tempest formed of blood, a Saracen pope, strange creatures suspended between the animal and the human, and corpses animated with uncanny life, Hybridity, Identity and Monstrosity in Medieval Britain maps how collective identities form through violent exclusions, and details the price paid by those who find themselves denied the possibility of belonging.


Author Bio
Jeffrey Jerome Cohen is Professor of English at the George Washington University in Washington, DC. His work has long explored identity, postcoloniality and monstrosity in medieval literature. He is the author of Medieval Identity Machines and Of Giants, and the editor of The Postcolonial Middle Ages, Thinking the Limits of the Body, Becoming Male in the Middle Ages, and Monster Theory:Reading Culture. His essays have appeared in numerous journals, including Speculum, New Literary History, Exemplaria, and the Journal of Medieval and Early Modern Studies.


Table of contents
Introduction: In medias res * Acts of Separation: Shaping Communal Bodies * Between Belongongs: History's Middle * In the Borderlands: The Identities of Gerald of Wales * City of Catastrophes * The Flow of Blood in Norwich * Epilogue: In medias res
Posted by Jeffrey Cohen at 7:41 AM

Hey! Have you read Caradoc? It appears in the Everyman volume '3 Arthurian Romances,' and is taken from some grail continuation. I just bring it up because it includes a wicked wizard who tricks the husband of its hero's mother into sleeping with a succession of animals while the wizard knocks up said hero's mother. Later, the magically cuckholded fellow gets hold of the wizard and engages in a bit of contrapasso by forcing the wizard to have sex with various animals. In this case, the unfortunate animals used for this punishment give birth (to, depending on the animal, a hawk, a boar, and a greyhound, i.e., cynegetic animals)

Oh, and I should say: I was going to buy this. But I blanched at the price tag. Sheesh. And chances are it'll be out at my U for the next few years.

So I contented myself w/ Steve Kruger's new book (not expensive in paperback w/ the Kzoo discount) and w/ waiting for your new one to appear, embossed and shiny, in my supermarket checkout line.

Are you going to make me admit on a page that trumpets the erudition of my new book that I haven't read something? That stings. But I will look into Caradoc right away because it sounds fantastic.

As to the price ... well, the policy of Palgrave is to wait two years for paperback. If I'd gone with a university press I'd have simultaneous paperback, but my book would still be 18 months or so from publication. My personal recommendation is simply to shoplift the book or to order it using a fraudulent credit card number.

Yesterday my book was outselling Hamsters, Gerbils, Guinea Pigs, Rabbits, Ferrets, Mice, and Rats: How to Choose and Care for a Small Mammal by Laura S. Jeffrey, #294,004 in book sales at Amazon.

Today it has fallen to #307,570 -- significantly behind even The Treasures of Darkness, a book that costs $1.75 and is listed as "Not Available."

My personal recommendation is simply to shoplift the book

I decided gave that habit up a while back. Get thee behind me!

"Caradoc began to keep watch, so well that he surprised his father the enchanter with his mother one night in the tower. I tell you that he caused him plenty of shame and dishonour. In order to avenge himself, the King* forced him to lie carnally with a hound, then with a sow, and then to avenge himself further, he made him cover a mare. When he lay with the bitch, the enchanter engendered a large greyhound which was called Guinaloc and was Caradoc's brother, and with the sow, a huge boar which they called Tortain, and with the mare a great war horse, the powerful spirited Loriagort. I tell you they were Caradoc's brothers and his father's sons."

* That would be Caradoc's step-father, also named Caradoc.