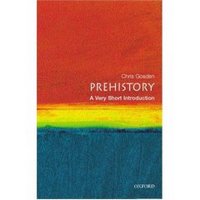 Last summer while browsing the bookstore at the British Museum I picked up a volume in the new-ish Oxford series Very Short Introductions. (I should clarify: I picked it up, proceeded to the till, and paid for it. Then I took it away and read it).

Chris Gosden's Prehistory: A Very Short Introduction accomplishes the impossible, providing a terse yet readable account of approximately 6 million years of human history in under 130 pages. And we are not just talking about, say, Europe: this book is about ALL of human prehistory, everywhere, from Africa to the Americas to the South Pacific. Judged by the standard of coverage and scope, the book is an abject failure, but considered as an attempt to survey the problems of attempting to comprehend a pre-textual past -- especially through "the stories we tell of the past" -- the book is remarkable. I used it as the first text for a graduate seminar I taught last year, in a session devoted to exploring how a people might send a story into some distant future without the use of words. In fact Prehistory paired well with Walter Mignolo's scholarship in Writing without Words . As a modern analogue we looked at sculptures and signs designed to warn people away from nuclear waste sites long after our current civilization has passed. Another pleasant surprise about Gosden's little book, by the way, is its vaguely feminist interpretive strategies.

Last week I picked up two more volumes in this series which has already reached 100+ volumes: John Blair's The Anglo-Saxon Age: A Very Short Introduction and Julian D. Richards's The Vikings: A Very Short Introduction. Blair's volume was a disappointment: it's just an excerpt from Oxford Illustrated History of Britain. Considering these books are not Very Inexpensive Introductions, it would be better just to put the longer work on reserve for students if I ever wanted to use it for a class. The Vikings, on the other hand, was written specifically for the series and is money well spent. Its 168pp survey the Viking myth from the Middle Ages to the present, offer a wide-ranging analysis of life in Northern Europe, consider the settlement of Greenland, and give a cautious overview of the "genocide vs assimilation" arguments for places (like Pictland) settled by these peoples.

Perhaps it is because I am so prolix, it's refreshing to read short and breezy takes on tough subjects like these.

On a related note, I had the pleasure of sitting next to Jean McGarry on an airplane recently. She told me about her new book A Bad and Stupid Girl, and I'm looking forward to reading it.
Posted by Jeffrey Cohen at 8:50 AM

I'm a big fan of the VSI series (although, as you say, the Anglo-Saxon entry is soft). The literary theory one paired with a Norton Critical Edition works really well for those "Welcome to English!" classes.

Unfortunately, the Medieval England volume doesn't work very well in the classroom -- partly because it starts at 1066 (why couldn't they have started with Bede?), and partly because it never addresses the question of what "medieval" is.

The VSI to the Celts isn't very good at all: it breezes from Roman times to the twentieth century without pausing at all in the medieval period. It certainly wasn't worth the $4.98 I paid for it on discount.

i'm intrigued-- they've planned both a "renaissance" and "the renaissance" title for 2006...

And on their website, both evolution and feminism are listed as volume "141." coincedence? i think not!

So they are a mixed bag. I suppose that has to happen once your series runs into the triple digits.

And as HD makes clear with her close reading of the series list, Very Short does not equal Very Accurate.

Here's something on those durable and "universal" signs for nuclear sites: