Celery World, We Are Coming 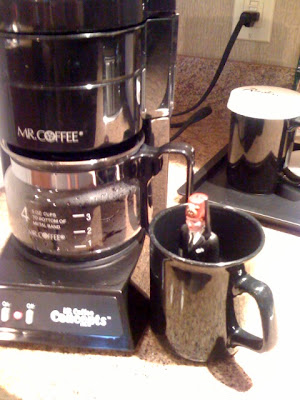 Today the ITM Bloggers are taking their first annual daytrip. We'll pack into the PT Barnum, strap the Tiny Shriner to his booster seat, and drive to a nearby celery farm (which we have rechristened Celery World, making it seem more exciting than it actually likely will be).

I'm a little worried about Tiny, though. He stayed up far too late last night at the BABEL party. A small scandal is swirling around him: he was seen emerging from a closed coat closet with a well known medievalist who had been in the running for our annual Best Coiffed competition. Suddenly s/he had hair so rumpled that said medievalist was immediately disqualified.

I just found Tiny in my coffee mug, insisting it is a very compact jacuzzi. He is about to learn otherwise.
Posted by Jeffrey Cohen at 7:41 AM