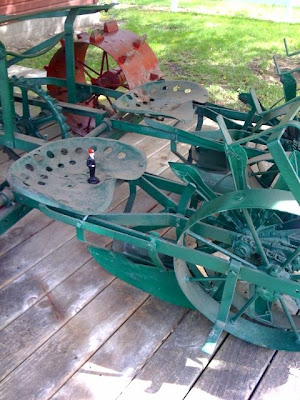 So Tiny and I are sitting at the Detroit airport, waiting for the plane that will speed us back to DC and the ordinary world. He's sipping a caramel macchiato ("short" of course) and I am just realizing that this is the most solitude we've had since Wednesday. I am looking forward to returning home, of course, but I miss the conviviality of Kalamazoo as well.

Yesterday was our much anticipated ITM Bloggers Day Trip to Celery World, an expanse of celery and bike trails that can be described best as either "green" or "stalky." The sky was that crisp blue that holds sway only on perfect days, and the pathetic fallacy was in full swing as we walked nature trails, pointing out wildlife to each other ("A duck!" "A goose!" "A squirrel!" "A toddler on training wheels!" "Celery!"), and for a few leisurely hours reveled in how much we enjoy each other's company. Tiny's legs are too stubby for him to keep up with us, so he climbed into Mary Kate's purse and peered in regal splendor from its outer pocket. As we left he insisted on riding a tractor. Though the Celery Interpretive Center was closed for the season and its gate locked, Eileen declared (in typical Eileen fashion) "Fences are for climbing!" and spryly sprung over the top, Tiny clutched in hand. He enjoyed the tractor but admits he is a city boy ... and let's face it, even celery towers over the guy.

Later in the day, in the midst of lunch, 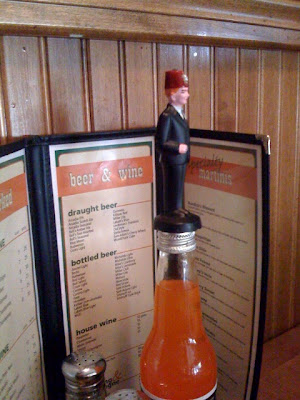 he climbed to the top of a soda bottle and proceeded to lecture us on how repulsed he was to learn that the celery in his Bloody Marys grows in the ground, and bugs touch it. Luckily Karl was eating a sandwich nearby, so he didn't get to deliver too long a screed before hopping from the bottle top due to whizzing mustard.

Tiny was exhausted, so he missed the panels and the 5 PM wine hour. He wants you to know, though, that the winners of this year's Best Coiffed Medievalist were announced at that libation celebration. Among the men the unanimous victor was Dan Remein, who thanks his stylist Kelly. In the women's category we had an UNPRECEDENTED three way tie (it was a good year for coiffure): Christina Fitzgerald, Betsy McCormick, and Christine Neufeld (reconfirmed after numerous recounts and brief hanging chad scandal). Congratulations to all, and remember: you are not a serious medievalist unless you possess serious hair.

The Tiny Shriner thanks all the friends who made this conference such a good one. He looks forward to returning to his ledge for a few weeks, though, and dozing away the patina of learnedness he accidentally accumulated.
Posted by Jeffrey Cohen at 2:20 PM

Does TS have a tiny funny looking car that he rides around parades in? I think I saw one on Craig's List recently...