Guess Who Else is Going to Kalamazoo? 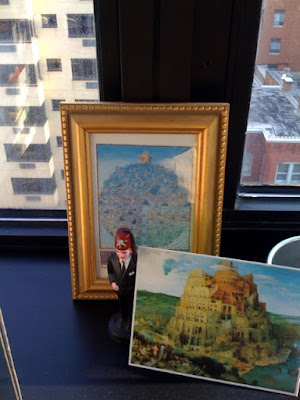 Look who received an invitation to the K'zoo BABEL party.

The artsy postcard emblazoned with the Official BABEL Image arrived wrapped in an inconspicuous envelope. On the back is all the top secret information about hwere, when, and which password to utilize. Though addressed to me, I know how these things work, and promptly presented the postcard to the Tiny Shriner, its truly intended recipient. In the picture at left you can see him perched upon his ledge, party invitation in hand. Behind him is the framed T-O map he has been consulting in order to find exactly where Kalamazoo is located (much to his surprise, it is NOT the navel of the world).

Carbon footprint be damned, Tiny will be boarding that plane with me. It's Southwest, so first class is not a possibility ... but the Tiny Shriner is used to slumming it.
Posted by Jeffrey Cohen at 8:36 AM

You crazy medievalists with your crazy spellings.

I don't pretend that I know how to spel.

I like to think of that as 'hwat?', the poem beginning with the hard-of-hearing Beowulf-poet snapping at his interlocuter.

How did you know it was for the Tiny Shriner? Clever boy.