Engaging with Nature: Essays on the Natural World in Medieval and Early Modern Europe 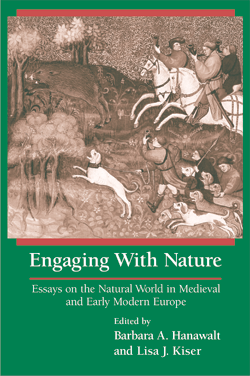 The essay that emerged from the earliest of these posts is called -- surprise! -- "Inventing with Animals in the Middle Ages." The piece explores how medieval artists of both texts and images used animal forms to explore identity outside of human or historical circumscription. The essay is mainly about animals as catalysts to "thought experiment" modes of art, and so is rather different from the kinds of ethical and philosphical analysis we've seen on animals here from Karl. The piece is also partly about antisemitism, race, medieval erotica, and the limits of historicism as an interpretive method. It includes a very nice illustration from the Aberdeen Bestiary of a hermaphroditic Jewish hyena. Here, in case you are interested, is my closing paragraph:

Culture and context conspire to delimit the animal's meanings and relegate it to a state of being that is subordinate, silent, still. Though at times an excellent vehicle for the expression of human meanings and stories, though at times a body that seems too easily reduced to context and anthropomorphic determination, the animal – no matter how intimate it becomes to human worlds – remains apart, persists as strange. The animal that (as Derrida would say) therefore I follow leads us to a middle space where allegories and moralizations seem insufficient in their power to contain, a place of dispersal, multiple agency, and intercorporeality. Leaving the human less confident of integrity and dominion, the animal goes its own way, inviting us to see what happens when the species line fades, when the inhuman inside of us invites us towards unknown horizons: the liminal space of the human and the posthuman, of the ancient and the utterly new -- the threshold called the medieval.

I'll reproduce the University of Notre Dame Press information on the book below. The volume in its entirety looks to be quite interesting.
-----------

“ Engaging with Nature is a collection of impeccable scholarship that will make a highly original contribution to the emergent field of medieval and pre-modern studies on the history of nature.” —Claire Sponsler, University of Iowa

Historians and cultural critics face special challenges when treating the nonhuman natural world in the medieval and early modern periods. Their most daunting problem is that in both the visual and written records of the time, nature seems to be both everywhere and nowhere. In the broadest sense, nature was everywhere, for it was vital to human survival. Agriculture, animal husbandry, medicine, and the patterns of human settlement all have their basis in natural settings. Humans also marked personal, community, and seasonal events by natural occurrences and built their cultural explanations around the workings of nature, which formed the unspoken backdrop for every historical event and document of the time.

Yet in spite of the ubiquity of nature’s continual presence in the physical surroundings and the artistic and literary cultures of these periods, overt discussion of nature is often hard to find. Until the sixteenth century, responses to nature were quite often recorded only in the course of investigating other subjects. In a very real sense, nature went without saying.

As a result, modern scholars analyzing the concept of nature in the history of medieval and early modern Europe must often work in deeply interdisciplinary ways. This challenge is deftly handled by the contributors to Engaging with Nature, whose essays provide insights into such topics as concepts of animal/human relationships; environmental and ecological history; medieval hunting; early modern collections of natural objects; the relationship of religion and nature; the rise of science; and the artistic representations of exotic plants and animals produced by Europeans encountering the New World.

“ Engaging with Nature is a deeply pleasurable volume to read. Using an incredible range of primary and secondary sources, the authors richly realize the methodological promise inherent in the emergent field of medieval and pre-modern studies on the history of nature.” —Kathleen Biddick, Temple University

I can't wait to read this volume, and especially your essay in it. I've had my copy pre-ordered for months now so the excitement has really been allowed to build up. Don't you have another essay coming out soon on (what I understood to be) the fluorescent bunnies of Eduardo Kac? I thought I remembered you writing something about that not too long ago.

Looking forward to reading this. Your concluding paragraph made me feel naked, again, as in always already naked. ND is gonna publish my animal/human book too!

Somehow I lost the response I wrote earlier today. Here's another shot.

First, what an exciting volume: great names, and the sample we've seen above looks very promising.

Second, I'm reminded of two not-very-good papers I saw at Kzoo on animals, each of which focused in various ways on animal allegory. My single question for each was "why animals?" Why should animals be good to think with, and what happens when we think with them? What do animals offer to thought that neglected allegorical schema do not? Why not schema based on rivers, on stars, on wagons, on books. They exist, somewhere, but in nowhere near the numbers claimed by animal allegory. Of course the answer has something to do with the self-moving, (apparently?) self-thinking nature of animals, which at once allows the allegory to move and also slips its boundaries.

With that in mind, I'm tempted to return to a genre, bestiaries, that I have refused since I started thinking about these matters. I tell people I work on animals, they say, "oh bestiaries?," and I say "no. actual animals: carrion, hunting, things like that." I had this conversation at least 5 times at Kzoo: clearly I need a new angle.

I regret not having seen Christopher de Hamel's Kzoo plenary on the identity between bestiaries and psalters: from what I heard, he argued that bestiaries were used like psalters. I wonder if the argument can go the other way? What happens when beast allegory structures a psalter, slides from the margins into the main body, into the act of production, and of thinking production?

There's a possibility there, but the possibility should do more than simply: a) identify the ideal boundaries; b) shake them up. What I like about your sample above, Jeffrey, is that it does A and B, sure, and A and B are always absolutely necessary, but it also adds desire, which is both a catalyst and a result of boundary sliding, and which opens us up to l'avenir, the unknown to-come. Or, if we want to refuse to think hope as temporal deferral, as the "not-yet," then let's call it the unknown, but still felt, present in all its polychronicity.

if you are thinking of pslaters acting as be(a)stiaries, look no further than the Luttrel Pslater, with its wierd and wonderful animal forms that act as a form of commentary upon the text of the Pslater itself.

Right: I've looked at that Psalter for various stuff (if I recall correctly, there's also an illustration of the Marian miracle of the Jewish child saved from the oven), but--again, IF I recall the summary I heard correctly--de Hamel's argument had to do with a much more intimate relationship between bestiaries and psalters in general. If anyone was actually at the lecture, perhaps they can help me here: he noted similar structural features, contexts of production, made some anagrammatic connection between "Beatus vir" (opening of Psalm 1) and "bestiarum" (usual first word of a bestiary), and so forth, with the upshot that the connections are NOT 'simply' of margin to text.

I'm growing increasingly frustrated that the missed the talk!

How exciting! I can't wait.

Cheers to that Karl and Nicola, visa sloppy animal scholarship. That is, to support asking, "what about actual animals?" And that's why I *love* the title of Jeffrey's essay.

I am thinking especially of Agamben's--let's say--'schematic' of the anthropological machine, by which things need to be constantly articulated, and thinking of approaching it from the 'animal' side of the inclusion/exclusion mechanism by which 'man' (to use his [translator's] term) is produced.

Actually, when I first started reading ITM I was, to be honest, not so itnerested in working on 'animals,' but have found myself inextricably caught up in learning to think the animal, animal that I am, as I think more and more about, say, 'being born in the middle ages,' and wanting to connect up a reading of Chrétien's Perceval to Samuel Beckett's characters (what in the world _are_ they?) visa vis A. Klowsowska's paper at Kalamazoo the other week.

Anonymous: the Kac piece, which is quite brief, is supposedly out already, in the volume Queeering the Non/Human. I haven't seen it yet, though.

Nicola: nakedizing readers is my perpetual goal. Congrats on the UND Press contract: they are publishing some really great stuff, and still doing paperback as well (unlike Palgrave).

Karl: "why animals?" is not something that I address adequately in my piece. It does strike me, though, that one answer to the question of why animals (versus rivers, stars, or plants) is simply commonality/analogy. A recent arrival from a distant planet might have a hard time telling apart a human, a monkey, and a starfish. They are all roughly similar, and not only to the eye. So doesn't it make sense to be fascinated by that which is just another version of us, yet a version that a weak boundary (a boundary ultimately of freedom) sets apart from?

dan remein, if youa re not fascinated by animals, you cannot remain part of our secret ITM club.

I believe, for the record, that I was recounting my converstion to being fascinated with animals, as a scholar. So yes, I am.