To the Muses of BABEL: Thank You and Good Night 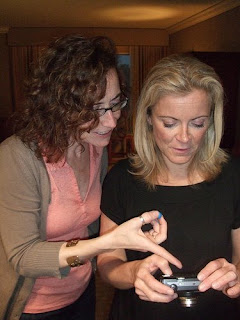 Yes, at some point, I am going to write a substantial post on the Kalamazoo Congress, and I fear I have almost too much to say about so many papers and sessions I don't know where to begin. But before we get there, I wanted to say something that I have been meaning to say for a long time. As we've pointed out again and again, the BABEL Working Group is a non-hierarchical collective with no top, no bottom, and only a middle, but we would be lying if we did not tell you that we do have three Muses who form the very heart and soul of BABEL: Betsy McCormick, Myra Seaman, and Kimberly Bell. Without our muses, BABEL doesn't want to live or even wake up in the morning. Everyone needs beauty in their lives, and in this case, BABEL's cups runneth over. But unlike other Muses [have you ever met any? they mainly sit around, look good, tell you what to do, then take credit for it afterwards], the Muses of BABEL are also doing all of the work: the editing, the writing of book chapters, the presiding, the presenting, the organizing, the paperwork no one wants to fill out, etc. You know that scene in the The Wizard of Oz when Toto pulls back the wizard's curtain and there's only a man back there pulling on various levers? Well, when you pull back the curtain of BABEL, it's Betsy, Myra, and Kim. I not only raise, but also toss over my shoulder, my martini glass in their honor. That sound of breaking glass on the marble floor of the house of BABEL? That's for the Muses. 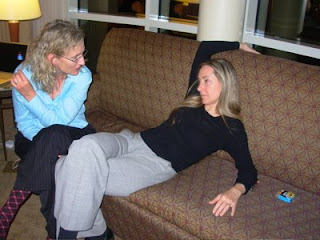