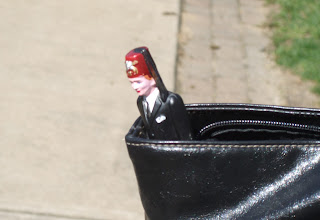 Expect a substantial post as soon as I can get out from under the grading that ambushed me as soon as I stepped in my door. But, first, a few awards and memories:

For hilarity, enthusiasm, for the promise of transforming the profession, and for throwing the best darn parties: this year's BABEL core (Eileen, Betsy McCormick, Myra Seaman, and Justin Brent).

For being everyone's Lodestar: Anna Kłosowska

For being some of my new favorite people in the world: Christine Neufeld, Holly Crocker, Dan Remein

For de-zombifying me in the airport: Tison Pugh, James Schultz, Martha Driver

Some trivia: How many times moved to tears (or at least wetter eyes) during sessions this time? Three. Eileen's Guthlac paper (the description of the two demons watching Guthlac, weeping over his fortitude); many times during the Pete Beidler session (including tears of laughter at the image of PB, at a Kzoo session on clothing, getting on a table to don his Foot-Mantel); Steve Guthrie's paper on torture ("You start with the present because that's where the bodies are buried"): if you slept in Sunday, you missed a lot.

Favorite New Session Title that I'll Never Get to Use: "Crazy Shit I found in the PL." (if the first year's a success, we'll continue with the CCCM and MGH).
Posted by Karl Steel at 10:39 AM

Eileen's Guthlac paper was incredibly moving (literally, since it was structured on being born and being borne). Her quiet invocation of the queer in that moment of demonic touch, its rupture through saintly separation, and the palpable sadness in the demon's yearning to hold an an embrace denied: it was an almost religious experience to hear her unfold the moment.

Not that your paper was at all shabby, Karl. I loved how you invoked the Karl of last year -- the one who made pronouncements that I think no one on your panel realized how (if true) would wholly undercut many of their projects. This year's Karl is more utopian (or idyllic) and far more affirmative. He also created a moment that [I imagine] must be similar to going to church and feeling something beyond yourself take you outside of yourself, especially as he deployed his patented phrase 'I want to ...' and staged an intermezzo.

PS Glad you made it back with some good cheer intact and good luck with your grading. I am concentrating on the last thirty seven emails in my bin.

"Favorite New Session Title that I'll Never Get to Use: "Crazy Shit I found in the PL." (if the first year's a success, we'll continue with the CCCM and MGH)."

With a slightly more program-friendly title, I seriously think you (or somebody) could do this. I bet some of the editorial and commentarial material is pretty wacky too.

"Forgotten Gems of the PL"?

"The PL Your Professors Never Told You About"?

"Adventures in the PL"?

I'd love to go to one of those sessions...

Thanks for the kind words, JJC. I couldn't help myself with the patented phrase: it has to go in, so long as it actually means what it says.

BLB: your new approach to the Crazy Shit series works, but I think--tomorrow, as the deadline is the 15th--I'm going to propose an 'Animals and Ethics' panel. *You* should do--I hereby say, go for it--the PL session, because, yeah, I'd totally go see that. The session idea came from the Babel party when Carolyn (forgot her last name! At Wyoming? Montana?? Met her at Leeds in 2005 too) talked about a *very sexy* moment Rupert of Deutz shared with Christ (kiss me deeper, he said, and mouths opened; no, deeper, and the hand went into the side; no, deeper, and the hand went still deeper).