John Milton, Neil LaBute, and the Question of Sin 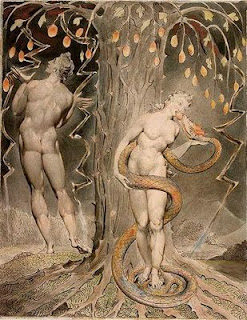 More than several times in the past on this blog we have had discussions about the sometimes threatened status of medieval studies within the university. While medieval studies thrives in some places [and I think George Washington University's Medieval and Early Modern Studies Institute is a good example of that, as are the inter-disciplinary workshops, "Youth, Violence, and Cult," currently being held at the University of East Anglia], in others it shrinks and sometimes disappears altogether, or at the very least, is always being questioned for having, supposedly, non-relevance to modernity, to modern literary and historical studies, etc. While I will always advocate for medieval studies--at both the undergraduate and graduate levels--as having the right to operate as a sort of stand-alone discipline [by which I mean, there will always be important value in highly specialized fields of study, whether medieval studies or quantum physics, and the field itself cannot survive or grow without specialists who spend the majority of their time mining very narrowly-defined veins of subject material], at the same time, and at the undergraduate level, especially, I think we have to work a bit harder to integrate medieval studies and texts into the curricula such that they can be seen to be in important trans-historical contact and provocation with a variety of texts, socio-cultural movements, genres, authors, etc. in other historical periods. It is not just a matter, either, of sketching out certain teleological literary historical chronologies in richer fashion [such that one thing leads to another, or that medieval studies and more modern literary studies simply become more diachronic], but rather, of helping to produce continual tension and provocation between the medieval and earlier and later periods.

Of course, when many of us teach medieval courses, we are always highlighting the ways in which medieval texts "speak," as it were, to contemporary life and thought, and also demonstrating the various ways in which "the medieval" is embedded in the thought and texts of later periods. And I myself, when teaching M.A.-level seminars in medieval literature, always bring in at least one contemporary text as what I call a a cross-temporal "cut" in order to provide what Kathleen Biddick has termed the "shock of medievalism"; so, for example, in a seminar I am planning for the spring 2010 semester on medieval sexuality, we will conclude the semester with Jeffrey Eugenides's contemporary novel, Middlesex, and we will also be watching some films from the oeuvre of Pedro Almodovar, in order to provoke [I hope] some interesting conversations about the longue durée history of sexuality in Western culture. Nevertheless, for a long while now, I have also been interested in thinking about new ways in which classical, medieval, and early modern texts could be integrated as "core" components in general education courses, as well as in courses required, say, for the B.A. in English, in a manner that would get us beyond the courses simply marked as "Chaucer: Canterbury Tales" or "Shakespeare: The Comedies and Histories Plays" [courses that my department has offered for a long while now, and which can satisfy general education requirements or can be used by our majors to satisfy what we call a "Major Authors" requirement].

Traditionally, in my department, English majors have only needed one "Major Authors" course and there were only four choices: Chaucer, Spenser, Shakespeare, or Milton. Shakespeare and Chaucer have been the popular choices and there has never been an empty or under-enrolled Chaucer course, but there's something deadening, in my mind, about doing things this way. Sure, we can fill the Chaucer class and students will enjoy it and gain a lot from it, but there is a kind of "locking down" and even historical "draining" that occurs in the name-string "Chaucer-Spenser-Shakespeare-Milton," in which each of these authors is both sequestered from every other author, but also, by virtue of appearing in our catalogue together this way, flatten out the extremely complex and heterogeneous literary history that might pass under a variety of other names.

In order to shake things up a bit, and as part of an overhaul and re-envisioning of our entire B.A. program, we increased the number of required "Major Authors" courses from one to two, and we also added an additional single-author course in the oeuvre of Toni Morrison [simply titled "Morrison," to be a bit provocative and challenge the canonicity of the other four supposedly "major" authors, but also because we really believe she is that important]. But more importantly, in my mind, we created two new "Major Authors" courses titled "Shared Traditions" and "Crossing Boundaries"--in the first case, meant to showcase two to four authors who share an historical period [thereby aiding students in developing some in-depth knowledge connected to temporal "periods," but with more leeway as to what constitutes the so-called important periods and with more lateral movement among multiple authors], and in the second case, meant to showcase two to four authors who work is located in completely disparate time periods, yet they can be argued to share certain preoccupations [thematic, stylistic, etc.]. I am especially excited about the "Crossing Boundaries" course because I believe it will lead to more than the usual number of students being exposed to premodern literatures, and in a setting in which those literatures are studied as they come into vibrant contact with and inflect texts from other periods. Individual faculty members can design these courses in any way they see fit and with special emphasis, of course, on their own scholarly interests and projects. The courses have maximum plasticity, therefore, and will not self-sediment over time. 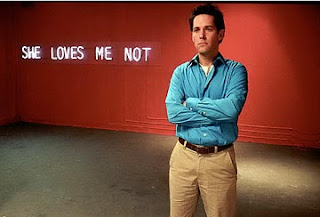 Our new curriculum went into effect this semester and I am offering the first section of "Major Authors: Crossing Boundaries" on John Milton and the American playwright Neil LaBute and their joint preoccupation with the matter of "sin." Yes, yes, yes, I know this is not a medieval course, per se, and I have plenty of those planned, too, but since Milton always got short shrift under our previous B.A. requirements, I thought the time was ripe to recharge him with some peculiarly LaBute-an energies. One of LaBute's plays, The Shape of Things, is a contemporary re-telling of the story of the Fall [the main characters are Adam and Evelyn, whose initials are "E.A.T."], and interestingly enough, as I began reading through LaBute's oeuvre, I noticed that in many of his plays, there is at least one, if not more, references to Adam and Eve and the Garden of Eden. In any case, I thought it might be interesting to read Paradise Lost with the students, and then LaBute's plays, which offer extremely dark and deeply cynical portraits of the relationships between men and women, and between men and men, in contemporary American life. Because LaBute also has a religious background as a once-devout [and still, to a certain extent] practicing Mormon whose plays are laced with references to sin, morality, evil, and the existence and non-existence of God, it seemed a natural fit, and the course will serve the dual purpose of giving students a deep immersion in both Milton's Paradise Lost and LaBute's plays and films. And if I'm really lucky, they will not be able to think one [Milton or LaBute] without the other in the future [hopefully in ways that will mess up their minds for good, because let's face it, what else is an education for?].

For those who are curious, the syllabus can be perused here:

ENG480 Major Authors: Crossing Boundaries: The Question of Sin in the Works of John Milton and Neil LaBute

I commend you for your incredible efforts toward reshaping undergraduate education and the ways by which "major authors" are taught. As a final-year undergrad, I've had plenty of time to think about pedagogy styles and what methods of teaching are efficient, enjoyable, stimulating, and let one learn the most; it seems like your courses fulfill all of these. As much as I enjoyed my own Milton class, I wish that I could have taken your incredible Milton/LaBute course! I'm planning on going into undergraduate education myself, and I often think about the ways to make premodern texts "relevant" to students, or how to avoid the "medieval shock." And capping off your medieval sexuality course with Eugenides--wow! This is very inspiring. I hope your students like these classes!

Eileen, you certainly practice your preaching. That course's syllabus reveals so much labor in its careful construction AND so much care for your students. I love how you articulate why the course matters, why the students matter -- and how you have given its participants every tool to thrive. Please keep us updated on how this goes.

I have foundit is MUCH easier to bring cross-temporal endeavor to an undergraduate program than a graduate, esp. a PhD program. We are having the toughest time reformulating our doctoral comprehensive exam because the early folks want to insist on two fields (one major, one minor; each separated significantly in time); the 19th C British and contemporary American scholars (of whom there ar many more than med/early mod) are mostly against this scheme because it dilutes competence in their own field. As if coverage could ever be a workable model ...

I love the idea of a Morrison course, and your plan to juxtapose Milton and LaBute is inspired (although I still haven't quite forgiven LaBute for the 2006 remake of The Wicker Man). I wish there had been such willingness to question convention and transgress boundaries when I was doing English in undergrad.