A Spooky Day to You: A Transvestite Monastic Zombie, a Singing Corpse, and other tales? of woe 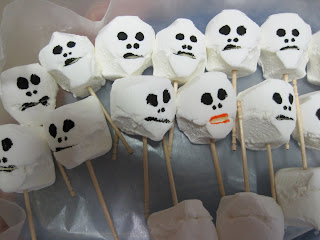 Important conversations on what we do as literary critics continue below, but as today's Halloween, we ought to take some time to scare ourselves. Here are a few of my favorite spooky medieval tales. I've occasionally mentioned the medieval story of the transvestite zombie (a variation of the Marina legend?):

The evil one envied a religious man who applied himself assiduously to hospitality along with his other pious works. Dreaming up a novel sort of malice, the evil one occupied the corpse of an unfortunate woman who had died without confession and viaticum. Dressed as a man, he entered the monk's cell, and accepted for an annual wage the necessary service of receiving guests. For a while he showed himself diligent, quick, and ready, seeking an opportunity to upset him with the malign sting of carnal desires.

But divine loving-kindness was ahead of his cunning. A holy bishop endowed with a prophetic spirit arrived to visit his parishes. Observing the hired servant at work, he perceived the hidden intent of the evil spirit. In private he anxiously asked his host who he was and where he came from. When the monk responded openly and unsuspectingly, the priest began to ask whether he ever saw him enter the oratory or participate in the divine mysteries. He answered that, when he himself arose for vigils, the man remained asleep outside with the rest of the seculars, but beyond this he had noticed nothing. The bishop called the man, and commanded him by authority of the divine name and of his episcopal office to tell who he was, what he was called, and why he came. But, gnashing his teeth and melting away, he replied, 'Truly, is what concerns you so well finished--or neglected--that you have to come to inquire about my affairs, which are none of your business? If you had delayed your prying visit a few days, I would have gotten what I came for.'

But, O great power of the divine name, and episcopal authority, so effective against us! At the bishop's command this creation of diabolical fraud vanished, and the corpse fell into dust and dry bones.

(from Geoffrey of Auxerre, On the Apocalypse, from a series of reanimation, golem, and fairy stories, all seemingly inspired by his horror at women priests)

A demon singer walks among us!

Cesarius tellis of a clark that som tyme had a swete voyce, to so mekull that men at hard hym syng thoght that it was a grete delite to here hym. So on a day a religious man happend to here hym harpe, and onone as he harde hym he sayd in this maner of wyse; "This voyce & this melodie is not of a man bod, rather of the devull." And all men mervayld of this at he said, & evyn furthwith he co[n]iuryd hym; & the fend onone went his way, & lefte the bodie as a dead, dry caryon; & so thai mott wit at it was a dry caryon.

And here's the Latin from Caesarius of Heisterbach: I have to say I much prefer "cadavere mox corruente ac foetente" to "lefte the bodie as a dead, dry caryon," not only because it's more repulsive, but also because it reminds me of "And alle the blee of his body was blakke as þe moldes / As roten as þe rottok þat rises in powdere" from the Middle English St. Erkenwald)

Labels: but on a saturday, festive friday

My favorite Halloween-appropriate medieval tales include the Wild Hunt (cf. Peterborough Chronicle, 1132: "Þa huntes waeron swarte and micele and lardlice, and here hondes ealle swarte and bradegede and lardlice, and hi ridone on swarte hors and on swarte bucces" ["Then the hunters were black and large and terrifying, and their hounds were all black and broad-eyed and terrifying, and they rode on black horses and black goats"]).

William of Newburgh tells a great undead story about a knight spying on his wife as she commits adultery. He topples in shock from the beam where he is lurking and dies. He rises from the grave when buried, haunts the town along with a pack of infernal hounds, brings plague. Two brothers who lose their dad dig him up. The corpse is still capable of bleeding, but the haunting ends once they burn it to ash. Great stuff!

Thanks Jeffrey! The William of Newburgh story reminds me of an incident in the life of Ty Cobb. I also love that 'bucces' eventually become associated with deer, but that, at least in 12th century, it has a more low class valence.

PS Katherine wants you to know that those marshmallow skulls are awesome.

Those marshmallows are quite scary - esp now my daughter is working in a smart restaurant where she is paid in marshmallows when she 'closes' on a Saturday night/Sunday morning ... transfestive marshmallow overload