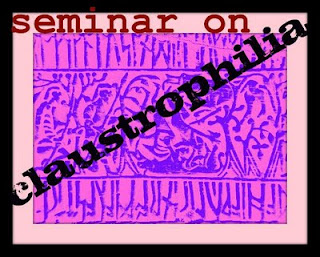 We've been talking about Cary Howie's Claustrophilia: The Erotics of Enclosure in Medieval Literature here at ITM since December of 2006 (other posts here).

Now is your chance to join a live discussion of the book, along with quite a panel of medievalists, early modernists, theorists, admixtures of those categories, and queer outliers. Like all GW MEMSI events, this seminar is free and welcomes all who wish to attend.

From the GW MEMSI website:
Registration is now open for the November 13 seminar on Cary Howie's Claustrophilia. You should have read the book to attend. The seminar takes place from 3-5 on the GW campus. Please email Lowell Duckert (lduckert@gwu.edu) right away to secure your space.

More info about our panelists:


Cary Howie is Assistant Professor of French Literature at Cornell University. Claustrophilia was published by Palgrave in 2007. His most recent project is Sanctity and Pornography in Medieval Culture: On the Verge, co-authored with William Burgwinkle (Manchester, forthcoming in 2009). His recent interests include medieval hagiography and mysticism, theology and literature, anachronism, the senses, and queer studies.

Eileen Joy is Associate Professor of English at Southern Illinois University Edwardsville. Co-founder and lead ingenitor of The BABEL Working Group, she also posts on In The Middle. Recent book projects include Cultural Studies of the Modern Middle Ages, ed. Eileen Joy, Myra Seaman, Kimberly Bell, and Mary Ramsey (Palgrave, 2007); and The Postmodern Beowulf, ed. Eileen Joy and Mary Ramsey (West Virginia UP, 2007). She and Myra Seaman are currently editing a new journal in medieval studies slated for 2010 titled postmedieval: a journal of medieval cultural studies.

Jeffrey Masten is Associate Professor of English and Gender Studies at Northwestern University. He writes about and teaches English Renaissance literature and culture, drama, the history of sexuality and gender, queer theory, textual editing, and the history and theory of authorship. He has written Textual Intercourse: Collaboration, Authorship, and Sexualities in Renaissance Drama (Cambridge, 1997) and is currently writing a book entitled Spelling Shakespeare, and Other Essays in Queer Philology. Masten is the co-editor of the journal Renaissance Drama (Northwestern UP).

Patrick R. O'Malley is Associate Professor of English at Georgetown University with teaching and research interests in Nineteenth-Century British literature and culture, gender and sexuality, the Gothic novel, religion and literature, Irish and Anglo-Irish history and literature, and literary theory. "Catholicism, Sexual Deviance, and Victorian Gothic Culture" was published by Cambridge UP in 2006. In addition, he has published articles and essays on Oscar Wilde, James Joyce, Sydney Owenson, and John Henry Newman. He is currently working on a book about the representation of history in the works of nineteenth-century Irish Protestants.

Michael Snediker is Assistant Professor of English at Queen’s College. He is interested in poetry/poetics, 19th- and 20th-century literature, American Renaissance, modernism, aesthetics, Henry James, literature and temporality, queer theory, and disability theory. His book Queer Optimism: Lyric Personhood and Other Felicitous Persuasions was published by University of Minnesota Press in 2008. Forthcoming publications include “The Hawthornian Acoustic” (ESQ) and “Pierre and the Non-Transparencies of Figuration” (ELH). He also has a collection of poetry, Nervous Pastoral, published by Dove/tail Press in 2008.


Karl Steel is Assistant Professor of English at Brooklyn College. His specializations include medieval literature, intellectual history, and social practice; posthumanism; medieval discourses and practices about the boundaries between humans and animals. Of his many forthcoming publications: "How Delicious We Must Be / Symphytic Gowther," in Fragments for a History of a Vanishing Humanism, eds, Eileen A. Joy, Betsy McCormick, and Myra J. Seaman (Ohio UP, 2009); "Number There in Love Was Slain," in Shakesqueer, ed. Madhavi Menon (Duke UP, 2009). (Books and Publications: Forthcoming Publications); and "Woofing and Weeping with Animals in the Last Days," postmedieval 1 (2010). He also posts on In the Middle.
Posted by Jeffrey Cohen at 11:29 AM