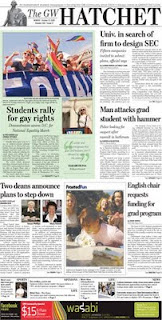 There's a front page piece in the GW Hatchet on a campaign I've been relentlessly waging to fully fund our doctoral program at GW. I've placed it with a brief preface on the English Department blog as well.

Common sense: no graduate student should ever have to pay his or her own way through the doctorate.
Posted by Jeffrey Cohen at 9:03 PM

Cheers to you, Jeffrey! Important, difficult work to keep up so relentlessly this campaign.

Ok, so this is my first comment in a very long time, either here or even on my own blog -- I'm starting to think there's such a thing as "blog years" much like there are "dog years."

YES YES. I think too often, with the demise of lecturers at many institutions (mine included, for the most part), graduate students are being treated as cheap labor but, equally as often (esp. in certain Ivy schools like Yale), without any of the avenues of regress available to most other employees. Obviously, I have in mind experiences around graduate student unionization. (BTW, at UT Austin there does exist a state employees union that graduate student teachers can join, but in Texas there's no collective bargaining power. So, you can form a union, but it will have little to no power to actually effect change)

Ok, back to point. Certainly there exists on paper/digitally the avenues of recourse that graduate students can take, but in exercising those "rights" students more often than not are black balled or otherwise experience political fall out. Yes, there's more than a little personal experience behind that comment. And no, I won't say any more that in a venue like this.

But my point is that, whether juridically or financially, graduate students are being expected to function like employees but within an pedagogical environment often directly at odds with those former tasks. It seems to me that we have too many unanswered -- or, more often, unasked -- questions about the very nature of graduate student life. Are we apprentices? Colleagues? Employees? There's an entire theory of labor that needs to be articulated alongside a rethinking of graduate pedagogy. Graduate students CAN'T be expected to support themselves financially and focus on their studies in equal measure. Something's got to give. I have a particular beef with those programs that "say" they support their students financially, when really what they do is hire them to teach. Support is not isomorphic with employment.

Lately, I've been thinking so much about this that I'm almost ready to put out an idea for an edited book. It seems to me that there's so much about the nature and future of higher education continuously being writing by administrators, politicians, professors, and public intellectuals that the actual voices of graduate students are being entirely overlooked or silenced. So, what about these "precarious lives"? I almost want the subtitle to be "Voices from the Precariat." Yes, I'm thinking Hard/Negri here, for in many ways I think the conflicted identities of and expectations for graduate students are a microcosm of what Hardt/Negri discuss as the current labor conditions of global capital in an of empire.

To amplify my last point: there is a reason, of course, that so much about the nature and future direction of graduate education is being written by (usually tenured) professors and administrators. They are the ones who can take the necessary risks to offer a vision. That's why the work that you're doing Jeffrey is so important!

So my thoughts about gathering together graduate voices is less to offer support for the difficult but needed work you're doing, but also to contest those others who seem not at all to understand or take into account the present realities of graduate school -- the ever-expanding time-tables, costs, quality of life issues.

My last comment was dashed off in the midst of doing laundry and after a very stressful two days. So I hope it didn't come across too abrasive. I'm interested in what others around here might be thinking, and look forward to an unfolding conversation.

So, I keep obsessing about what I wrote the other night. Let me first clarify one things. In the reported case of GW (and correct me, please), the teaching package includes tuition coverage and a stipend. Now, at UT Austin, e.g., a TA position includes only a tuition waiver for instate costs, plus a monthly paycheck. I don't know any student in my program that, if they don't already have savings from time off working between undergrad and grad, must also take out loans to support themselves. So, the "support" that a place like UT offers (which I'm only using as an example, since I know the situation exists at may other, especially public, universities) isn't *really* support in the sense for which Jeffrey is so rightly lobbying.

I keep coming back to this topic not only for reasons of personal investment and experience but also because I've seen so many other graduate students (here and elsewhere) struggle. I would add to this certain other important issues, such as mental illness/trauma/injury.

A friend, e.g., was in an accident last spring, and had a concussion that went undiagnosed until mid-summer. There's much about things she did over the summer (organizing her apartment, e.g.) that she can't remember. Nor could she even write or read in any effective way: she was experiencing all manner of cognitive problems. So, when she was finally diagnosed, it was by that point considered a traumatic brain injury. In August, she contacted our department, and yes they were very understanding and supportive...at that point. But now, in mid-October, she's feels pressure from them to take care of a number things, while also having other things foisted upon her. She had won a very nice travel grant/fellowship, and so the department plastered her face (others' that won something prestigious) on its PR materials. Of course, one might say that she could/should take a "leave," but I don't think she's in a financial position to do.

Here's my concern and perception: (1) the department (and I think this is VERY true in these areas for academic generally) doesn't seem to get that as recently as August my friend couldn't even write a good paragraph, that these kinds of injuries *take time* to heal. I believe this to be generally true of academic reaction to mental illness/trauma/injury because I just don't think much of the day-to-day business of academia knows how to deal with those debilitating experiences that affect the supposed key to an academic livelihood -- the brain. Consider, e.g., how dismissive some are (even in writing) of students who struggle with depression. (2) I can't help but wonder, and maybe this is too cynical, that department is more concerned about how it looks to the administration and elsewhere than with the reality such a student presents. Now I don't fault a department for showing off how great its students are, not least of which because it can be good for the students themselves in terms of increased visibility for the job market. But I do see this as connected to the larger problems we face with the on-going coorperatization of our universities.

Now, of course, I'm worried that what I've written above might be construed by some readers as at some level too cynical or perhaps bitter or worse still. But I'm not at all trying to imply those affects. I am, however, very concerned for myself, my friends, and those many others contemplating or coming into graduate school.

All of this together--and then some--helps explain, I think, why so much of my thinking in the last several years seems centered on notions of "precarity" and "dispossession." I'd be interested to know what others might think, especially if you take me as being completely off the reservation. But it strikes me as virtually impossible to talk about the issues of graduate funding and the nature of graduate school life/existence and its purpose(s) without some level of deeply personal engagement. But I also think we can't just share "war stories." We must also be productive.

I get it Nic: you are writing about the on the ground reality of what it is like to be supported in theory, but not in actuality. I am sorry for that.

Support must mean: tuition waiver; sufficient money to live without anxiety; the chance to teach (but not a compulsion to teach too much or every semester: there has to be free time for writing and thinking). Support is not employment; and I know many institutions treat it as a kind of inexpensive labor. That makes trouble for everyone.