"A cultura dos monstros: sete teses." Or, I was translated into Portuguese and nobody told me. 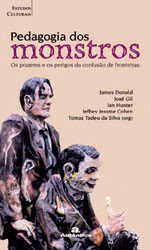 So I came across this website this morning, and through it a book published in Brazil, Pedagogia dos monstros: Os prazeres e os perigos da confusão de fronteiras. I was surprised to find myself on the table of contents, and writing in Portuguese no less.

I composed "Monster Culture (Seven Theses)" as the introduction to an edited collection called Monster Theory: Reading Culture (1996, but finished early in 1994).  One of my first scholarly publications, the essay is the most widely read work I've done. With Halloween just around the corner, this is the time of year that it bubbles to the surface, and I receive two or three media interview requests because of it. The essay enabled me to take a trip to San Francisco, and then buy my first car. Recently a Kalamazoo session celebrated its hideous progeny.

"Monster Theory" has been employed as a required text in composition courses; undergraduate students routinely contact me about the piece and blog the work it inspires; the theses have been surfaced in various graduate seminars; though grounded in the medieval, its ruminations on monstrosity have been adapted to American literature, Japanese film, science studies. The essay has traveled better than I could have hoped -- now, it seems, all the way to Brazil.

Getting Monster Theory into print was more difficult than you might imagine. Scholarly publishing can be a closed door when you are an unknown. As I was pitching the project in 1993, I was just out of graduate school and deeply unhappy with the dissertation I'd written (my director and reader had signed off six months in advance because one had departed for in Italy, the other for Germany; there was no defense, I just surrendered the bound volume and received a degree). I had a three year contract job that didn't pay much, but yielded a great deal of intellectual stimulation in an interdisciplinary concentration called History and Literature. I was reading as widely as possible in critical theory, studying how non-medievalists might analyze otherness and monstrosity.

Monster Theory came into being as an attempt to create a print symposium on the subject that would insert medieval and early modern studies more forcefully into contemporary cultural studies. I brought the collection to the University of Minnesota Press because they were publishing exciting, theory-savvy work. I found a sympathetic editor, and as I was in the midst of collaborating with her the project was snatched by her boss in what she bitterly described as a "Foucaultian power play." So I then worked with someone who (he told me frequently) had once taken a seminar with Gilles Deleuze.

When it came time to finalize the contract, he sent me a xerox of an article about how the high cost of lumber had made paper extraordinarily expensive. Then the contract arrived and stated no royalties would be paid on the book. I told him that seemed a little unfair, even if trees were dear. The best he could do, he said, was to give me royalties only after 1000 copies had been sold; otherwise the book was a no-go. What he did not tell me, and what I did not know, is that (1) the initial print run would be 250 copies, and (2) most academic books do not sell out their initial print run. I signed the contract.

Surprisingly, Monster Theory has sold several thousand copies in its various reprintings. Because the contract was created in 1994, no one had given thought to electronic reproduction and course packs. That is where I have made an unexpected windfall, since my essay has been anthologized so often: I am guessing that I have had royalty checks totaling $700 over the years. Nowdays a standard contract makes you sign away any profit that might be gained via copyright permissions and electronic dissemination -- another reason I am thinking that authors need to choose open access as much as possible.

The press never tells me when my essay is reprinted, though, so it is always a delight to find it in a new form. Even in -- especially in -- Portuguese.
Posted by Jeffrey Cohen at 8:17 AM

another reason I am thinking that authors need to choose open access as much as possible.

Word. And I especially like the way open access opens up the use distinction between what one needs/wants printed and what one does not. And on the author side, it works as a challenge to write a book utile et dulce enough that others will crave the artifact. Publication and printing are thus more independently related in a very modern medieval way (Enlightenment openness to information plus on the ground distribution via *infection*)--contra Speculum!

Wow. Now there's a project I never even considered for a literary translation class -- translating an academic article. Congrats on your first (is it your first? Be honest now...) publication in Portugese. :)

And also: as many know, I've been snowed under with dissertation chapters and articles. Thanks for letting me (and, I'd imagine many others!) know that there's a light at the end of the grad school tunnel.

I don't think you should worry about; there maust hava been a sort of misundertandimg. Tour text stands as a chapter of a book by one of a very important author, and I have used it at MA and doctoral programmes, and it inbcludes your full name and references. And more, by a very reliable publisher.
Beatriz Cabral, Theatre Professor