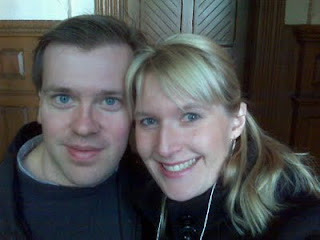 by Peter Konieczny and Sandra Alvarez

From our ongoing series, a history of electronic medieval studies.

Perhaps its best to begin by saying that Medievalists.net is not a blog, or least not a blog like the others on this list. Parts of our site are like a blog, such as the Medieval News section, but it might be best to say we are the media of the Middle Ages.


Peter: My online footprint goes back to 2001, shortly after I decided that I was not going to pursue a PhD program in medieval history, but become a librarian.  I still wanted to remain active in the field of medieval studies, since it is something I really love, and I was looking for a way that I could contribute. The opportunity came when at the business meeting of De Re Militari: The Society for Medieval Military History, we discussed the need to have a website.  I eagerly volunteered for the job, and went home to open Microsoft Frontpage for the first time ever.

After a few weeks of learning what I had to do to create a website, www.deremilitari.org was born. At first, the site was only going to post information about the society, but I wanted to use this opportunity to create resources for our members, such as articles and primary texts. Back in 2001 the amount of online resources for medieval military history was sparse - sites like the Medieval Sourcebook and the ORB had some material, but it was really rare to find academic articles.  So I started prodding my fellow scholars and asking publishers for permission to republish their stuff - and surprisingly nearly everyone said yes.  Over the next two or three years I did quite a lot of work on the De Re Militari website, scanning articles and texts (and sometimes retyping this stuff one keystroke at a time).  The site grew to include hundreds or articles, primary sources and book reviews, and has received a little praise along the way.  In April 2006 I created the Medieval Warfare Blog as an easier way to post news and updates, but I quickly started posting newspaper articles that mentioned stuff about medieval warfare, or just medieval history in general.

It occured to me that no website or blog existed that regularly posted news about the Middle Ages, and every day there was something going on such an archaeological discovery or a report on some new research.  Being a reference librarian, I have great access to online resources, so I basically can read from thousands of newspapers and magazines every day.  So I started up News for Medievalists (later renamed Medieval News), which just posted any articles and news that I came across. We have now posted close to 1400 items over the last three years, which just shows that medievalists do make a lot of news.  Now, while it is a blog in the strictest sense, it does not share some of the characteristics of other blogs - first, my own voice is almost completely absent in these posts - I dont add any of my opinions to these stories, even if it is about the discovery of the Holy Grail again.  Secondly, no one ever adds their own comments to these posts.

As I started this blog, I came to notice that all of the large medieval websites that I regularly used had stopped posting new material.  This included the Medieval Sourcebook, ORB, NetSerf - they have basically become dead because no one updates them anymore.  Instead, we now had scholars and historians creating their own websites where they posted their own material, Journals with open access were sprouting up everywhere, and lots of great medieval videos were being made available on youtube.  As a librarian, I see a major problem in this - there was a lot of great content out there, but it is incredibly difficult to find and keep track of it.  A website like the ORB could have served this role, but since that was not going to happen, I decided to start up Medievalists.net, and I turned to a close friend for help:

Sandra: I met Peter back in 1996, when we were both studying at the University of Toronto. Most of the people in our class were just taking a course to fill their history requirement whereas, almost all my courses were medieval. I was taking medieval history and minoring in English and I believe Peter was taking poli-sci and medieval history if I remember correctly - anyhow, it was nice to find someone else who loved the Middle Ages as much as I do.We remained friends throughout university and attended the Medieval Congress at Kalamazoo several times. I think I was the only undergrad there!

After university, we went our separate ways - I entered the workforce and Peter proceeded with his Masters and became a Librarian. I wanted to pursue and academic career but after graduating, I simply didn't have the money to continue school and to be perfectly honest, the stomach to handle more debt. Some days, I regret not going to grad school; mind you, the fact that I'm STILL paying off my student loans (I graduated in 2001), stops me from regretting that decision.  Still, in the back of my mind, I always dream of winning the lottery and running away to dig up medieval ruins and the bones of monks.

dieval. I was excited by this because it gave me that option of doing something with my degree without being forced to go the academic route. There is nothing wrong with academia, I have immense respect for the people who go all the way and become professors; I just think there should be more than one pathway into the medieval world. I'm not a professional scholar and I won't pretend to be. I have an Honours Bachelor of Arts and that's where it ends. If I ever win that dream lottery, I'll add more letters behind my name, but for now, I'm happy with the way things stand :)


I LOVE medieval history and want to share this wonderful period with the world. I'd like to make it interesting and relevant for everyone, not just pretentious academics hiding behind their books, titles and accolades. Lastly, I'd like shed some of the misconceptions/stereotypes people hold about this period in history. Peter offered me a fantastic opportunity to engage myself in something I truly love and offered me my "in" into the rather insular world of medieval studies.

From both of us: So what exactly our we doing with Medievalists.net?  We mentioned earlier that we are the media of the Middle Ages - the goal is to keep everyone informed about what is going on with the world of medieval studies. This means both medieval academics and those with just a keen interest in all things medieval. We want to promote the research and writings of medieval scholars to their colleagues, students and the wider public, and get people interested in all the wonderful and insightful aspects of the Middle Ages.

The site consists of a lot of sections, bur we will mention just a few - we have a medieval articles database, where we post a glorified link to any medieval academic article we can find. We add a little summary or piece of the article, and include some tags to serve as subject headings  At this point, we have done over a thousand articles, with another 10 000 (at least) to go. That way, if you are looking for something about on onomastics in Ireland, we would be the place to help you find it.

We also try to do a lot of interviews with scholars and writers - usually to discuss their new books.  So far, we have about 30 interviews online, and the people we have talked to have very gracious in giving detailed and insightful answers to our questions.  Most of the interviews are done via email, but we have filmed several and posted them up on Youtube - please forgive us for it being horribly amatuerish, but we hardly know what we are doing.

We also want to point out that unlike most bloggers or medievalists doing websites, we actually hope to make money at this. If the site is going to be successful in the long run, we need to really devote a full day's work to it.  At this point, we can put in one or two hours a night, but if the website grows like we think it will, we will be able to earn enough money that we can make it our real jobs - our dream jobs - and then be able to do a lot more, like report from conferences, do better videos, and provide more resources.  So when you go on our site, you will see various ads, or links to books on Amazon.com.  At this point, just over a year since we started this together, we have gone from 15000 hits a month to over 50 000, but we are still far away from making this a viable website.  Until then, we are promoting ourselves on Facebook and Twitter, and figuring out ways to get noticed.  Like the other bloggers here, this is an experiment in bringing out ideas and information, and serving as another voice for the community of medievalists. Our most popular section so far is on Castles for Sale, which might say something about medievalists are really interested in.

Posted by Jeffrey Cohen at 9:26 AM

I strongly support your concept. I have been interested in onomastics since 1949 and medieval studies since 1989 when we joined the SCA. My background is linguistics and theology but I "retired" from federal employment in HRM--an interesting coincidence. Until today I had not encountered your list. You were referenced on an SCA list. I plan to mention any onomastics references that you have--my online contacts are predominantly
onomastic--as soon as I can.