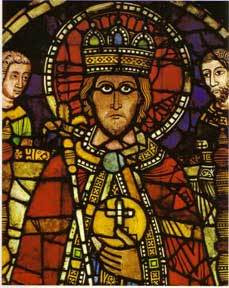 
Modern Medieval began at the end of May 2007, mostly because I had something to say and I needed at least the illusion that there was someone out there who would listen to me. In large part, the things I had to say came from my being a medievalist and being at Virginia Tech in the aftermath of the massacre on 4/16/07.  I saw something in the coverage of that event that was being neglected, an insight into the shooter's mentality -- one dealing with Christianity -- that no one seemed to be talking about.  So, my first substantial post was an expanded version of an op-ed I'd written for the local paper. I got into academia because I liked the research and the teaching but also because I believe that there's a place for public intellectuals in our society.  Too often, however, academics lament that no one takes them seriously.  I think part of that is our fault.  The onus, to a large degree, falls on us academics to put ourselves out there and have something to say about something.

The blog has continued to be an extension of this idea.  But within reason.  The epigraph to the blog -- "Although long-dead, the people of the Middle Ages still have something to say." -- means something to me.  I know (a lot of) something about the Middle Ages but I'm also a well-educated US citizen, who knows what's going on in the world.  So, I try to use the Middle Ages to, as appropriate, both intellectuallyfamiliarize and destabilize the present with the past.  I try to show lines of (unexpected) continuity and problematize romanticized notions of what the Middle Ages were. We, as both academics and medievalists, can and should contribute to the public conversation -- indeed, we must -- but the onus is mostly on us to get our voices heard.

But this isn't just my voice.  I started the blog because I knew of other good, academic medievalist blogs.  That circle has only expanded and it welcomes newcomers with open arms.  At "Modern Medieval," I've tried to open things up too.  We did a 4-part "blog forum" with guest bloggers (parts 1, 2, 3, 4), which met its goals in that the series generated a good amount of discussion.  I've also been fortunate to have Larry Swain, also of "The Ruminate" and "The Heroic Age," as a co-blogger for some time now.  And I'm always on the lookout for other co-bloggers to help share this responsibility.  The more voices the better.

Moreover, the blog is just one way of getting our voices out there.  I see the blog as 1 part of a much larger whole.  I organize events locally, showcasing the extensive talent we have a VT and in SW Virginia more generally.  I podcast to promote events, to aid my teaching, to make the aforementioned events available to an even wider audience.  I sometimes write op-eds for the local paper.  And now, I tweet; one of a growing number who do.  I became more convinced about moving to Twitter shortly after Kalamazoo 2009.  I'm still excited about the possibilities.  I've used it for research and I've used it for more general conversation.  Now, for the first time, in Fall 2009, I've tried to integrate Twitter into my courses, telling students about my public twitter feed, using appropriate hashtags to keep material together, trying to use this form of social networking to have a public, academic conversation among professor and students beyond the classroom's walls.  It's a work in progress...

Finally, we should be aware that there are new frontiers out there.  Facebook is the elephant in the room right now but there will be others (Google Wave?).  Blogging is just 1 thing.  Tweeting is just 1 thing.  This post, along with others, will appear in a book.  And that's another thing.  Each format reaches a substantially different audience, so it's imperative that we keep up and not be afraid to put ourselves out there.  We, as academics and medievalists, have good answers to some important questions.  Let's speak our mind.  Hopefully, some will be listening.

Posted by Jeffrey Cohen at 2:11 PM