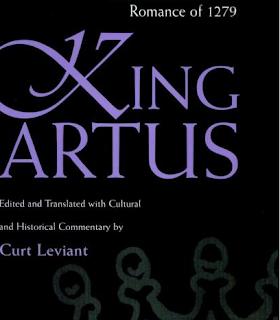 Once you come out of your food coma, and once you've read Michael O'Rourke's review below, you may have to start compiling next semester's syllabi. If you're teaching comp lit, particularly if you're at a school like mine, where a fair number of students read Hebrew and know Rabbinic exegesis, consider teaching King Artus, a late thirteenth-century, Northern Italian fragment of the Arthurian legend written in Hebrew (for a preview, see here). I did a few weeks ago, and I think I can call it a success. We'll see once the research papers come in. More details after the fold...

I had thought that Arthurian scholars already knew this work well, but judging by the available body of criticism--perhaps 5 articles, several of them from the past few years--there's a world of work to be done. The plot itself treats Uther's trickery of Igraine (here called Izerna), Lancelot's lust for Guinevere (here called Zinerva), and the quest for the Holy Grail (here transformed into a Jewish tamchuy, or charity dish).

More fascinating than the lengthy opening apology for secular literature (although this is wonderful) is the translator's many conversions of the story into Biblical and Rabbinic language. Our translator and editor, Curt Leviant, might have followed his own footnote and rendered "This is the history of Sir Lancelot" as "These are the days of the generations of Sir Lancelot"; the text gestures towards the meaning of Lancelot's name with "is it not written in the book concerning him?"; Lancelot swears by "ha-shem," the Name, during a lascivious conversation with Guinevere; and knights during a tournament shout "Praised be the living God!." I'm a little less certain, however, about Leviant's translation of the odd ending of the work: "[there:] fell many knights, one after another like lambs, and [Lancelot:] cut throats of horses like pumpkins." Pumpkins? I'm not qualified to judge Leviant's translation (give it a shot, folks, right here), but pumpkins seems unlikely, since I doubt that pumpkins would have been known to our anonymous author.

The edition comes with a wealth of supplemental material in which Leviant discusses the Judaizing work of the translator, proposes that Malory and this work drew on a common, now lost, source for certain scenes, and, especially, argues against the clever scholars who have traced motifs in the Arthur and Tristan legends to Celtic prehistorical Gods, to subcontinental folk tales, and to classical myth; instead, he says, look closer to home, in the Bible (Uther and Igraine as David and Bathsheba, Tristan and Mark as David and Saul, Tristan and Morholt as David and Goliath, etc.), and in the Midrash, which Christian scholars would have known in the twelfth century through the work of Andrew and Hugh of St Victor and Siegebert of Gemblous (the short essay on likely Christian knowledge of Jewish exegesis in the twelfth century is worth the book itself, and a great place to direct students, since Beryl Smalley's Study of the Bible in the Middle Ages can be intimidating for undergraduates).

Leviat makes a strong case for Biblical roots of several of these "Celtic" legends, noting that details in the David story specific to the Midrash, to Rashi's commentary in particular, appear in the stories of Arthur and Tristan. In some cases, I think he strains his case, but I think a bit of scholarly bomb-throwing is always necessary to shift the paradigm. No doubt scholarship in the 40+ years since Leviant's edition first appeared has refined his point, but I doubt the Celticists--particularly the badly disguised 'white pride' Celtic hobbyists--can ignore the evidence that Jewish storytelling and scholarship at least had something to do with the shape of these tales and their supposed preservation of the 'authentic' pre-Christian past of Europe.

I'd be happier with the edition, however, if it appeared in a larger volume of Jewish medieval narrative and lyric writing. There are fabliaux, fables, and love stories, all of which could be collected in one volume that might cost as much as this one ($25) and thus be more suitable for classroom use in a good Comp Lit course. In the meantime, though, teach it, and keep teaching it, as this might be the best way to realize my dream of the good Jewish anthology necessary for any medieval comp lit survey.
Posted by Karl Steel at 11:26 AM

Fascinating, especially the medieval translator's prefatory words: to think that Arthurian myths might be rendered into Hebrew to prevent madness and despair. This is great stuff.

I wish there were a way to connect the work to Britain so that I could include it in my undergraduate "Myths of Britain" course. The best I can do so far for bringing in Hebrew literature is some of the work of Meir of Norwich.

Thanks for posting this Karl.

JJC, I did include it in fact in this semester's 'Medieval British Cultures' Comp Lit course. Justification? Most Jewish writing from Britain hasn't survived, so this is what I can offer as a possibility of what it might have looked like. For that purpose, it actually helps that it's fragmentary.

As for your course, well, it has a better claim: the Arthur story IS a myth of Britain (and, per Leviatt, also an outgrowth of the David legend), isn't it? Just put it on the syllabus! You won't be sorry.

(although next time I'll add Meir of Norwich: totally overlooked him! thanks for the reminder)

I'm also teaching, in week or so, the Middle English Disputation between a Christian and Jew, which I've mentioned here frequently: it's the one in which a Jew leads a Christian to an underground otherworld where to show the Xian the round table, Arthur and his knights, and a crucifixion tableau, all of which the Xian disperses by brandishing the Host, at which point, they clamber out of the dark cave and the Jew converts. The ME is at once dull and opaque, but I'm translating it (poorly?) for the students.

Wow, you are so right Karl: thanks for providing that reasoning! I will have to think about whether to teach the whole thing over a week or do a small selection at the end of a Chrétien class as a way of opening up Arthurian futures.

Since I don't know the text I'd be starting from scratch. How much prep did you have to do before you felt comfortable talking about King Artus in front of a class?

Since I don't know the text I'd be starting from scratch. How much prep did you have to do before you felt comfortable talking about King Artus in front of a class?
It's been a long time since you were a junior professor! I just dive in* and figure I'll get it right a couple years down the line.

You could do a week on this if you loaded them down with decent secondary material on the Arthur legend or medieval Jewishness: it's so short it's barely enough reading, on its own, for a single class. On the other hand, it's so expensive (again $25) that it's hard to justify doing as part of another class. I'm sure you can figure a way out of this dilemma.

* by which I mean I read 2-6 articles, and spend another couple hours putting together 3 pages of notes for discussion. I'm emailing you my notes as soon I hit 'publish' on this comment.

I agree with Karl on the pumpkins. Leviant’s "...and [Lancelot] cut throats of horses like pumpkins" might have been better rendered: "and he lopped off horseheads like so many gourds" or something along those lines. The Hebrew word in the text--dilu'im--was used generically in the Rabbinic texts (with which the 13th century author is clearly familiar) to mean "gourds" (though, the noun is feminine, so the correct Hebrew plural would be dilu'ot, whoops). In this case, Leviant's "pumpkins" are a carryover from Moses Gaster's 1909 translation--not a mistake, but definitely off key as Karl notes.

[For what it’s worth, Gaster notes the difficulty with the simile, writing “necks (heads)”]

Matt, THANKS! That's exactly the kind of information I wanted.

Thank YOU, Karl, for the post highlighting this text, one that's intrigued me for a while. (also the link to the plant table was delightful) I'm very interested in what your students will make of it, particularly the strange preface which provides some clues, I think, as to what this "translation" enterprise is about. Please let us know how this turns out.

Will do, Matt. Right now, I have at least one student writing a final paper on it, in this case, thinking about the opening apology in light of Rabbinic commentary on another piece of secular Hebrew literature, namely, The Book of Esther (which famously makes no reference to God). [another of my students who knows Rabbinic Lit is writing on Bisclavret in light of commentary on Nazirites, e.g., Samson: also exciting!]