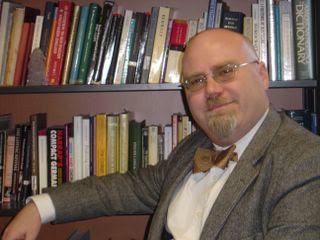 [#7 in our series of blog histories]

Despite its name, the Unlocked Wordhoard did not begin as a medievalist blog; instead, it grew out of a series of conversations I had with a colleague in the summer of 2005. We had begun discussing the fall of the public intellectual, how so few remained in the popular consciousness, and how little respect we had for those who did. As I recall, our lament was that scholars were either public or intellectual, but not both.

My colleague, however, had a strong conviction that all scholars have the responsibility to be public intellectuals to our own communities beyond the classroom. He argued that although not everyone is going to have a column in a national newspaper or appear as regular guests on nationally-syndicated radio and TV shows, we have a responsibility to the community to at least put ourselves out there. Over the course of a few weeks he convinced me that he was right, and furthermore convinced me to experiment with him in creating blogs. I agreed and jumped in with both feet. After a couple of months he abandoned blogging altogether and became a vociferous critic of the practice, while I became an enthusiast.


The early days were mostly struggling to find my voice, searching for one that was accessible but not condescending. I notoriously misspelled nous every time in my first post on June 16th, 2005 then went on to blog about any topic that caught my interest – Fathers’ Day, Bloomsday, “Why We Need Art,” a review of Batman Begins, Rosie O’Donnell’s poetry, etc. A few months after starting the Wordhoard, Hurricane Katrina hit the region, and I temporarily turned the Wordhoard into a public posting of relief efforts and needs.

Blogging about Katrina gave me time to reflect on some things I didn’t like about the Wordhoard: I didn’t like the voice I used in writing about subjects I had no expertise in – after all, a PhD in medieval literature doesn’t exactly qualify me to speak from on high about chemistry, yet like many other bloggers I found myself writing about current events even if they were not in my area of specialty. I began to call this voice “Professor Awesome, PhD” for his arrogant assumption of intellectual superiority in all areas. In order to banish Prof. Awesome, I made a silent policy to limit the Wordhoard to a very few topics I know a bit about: literature, medievalism, and academic life.

I assumed that this change would lessen the Wordhoard’s readership, but counter-intuitively the readership spiked. I found that the more I mentioned other topics, the less people read. Furthermore, I found that people really responded when I wrote about medievalism, which was one of my main interests and the implied topic of the blog title in any case. Once again, I narrowed the focus, expecting a drop in readership, and once again readership spiked. While occasionally Professor Awesome, PhD popped up, he mostly disappeared, and whenever I felt led to talk about something I have no specialization in, I tried to ironically ascribe it to my evil alter-ego, Professor Awesome, PhD.

While the subject matter narrowed, the readership broadened. My policy of keeping comments on the front page helped me combat my own Professor Awesome, PhD tendencies, but it also created a space for scholars and popular audiences to meet and discuss issues. Today academic blogging has become so popular that it is practically passé, but it must be remembered that back in those days blogging was considered a radical, potentially subversive activity. The pseudonymous “Ivan Tribble” was darkly warning in the Chronicle of Higher Education that bloggers would be viewed with suspicion and never find jobs, Daniel Drezner was denied tenure at the University of Chicago (a denial that was, fairly or unfairly, ascribed to his blogging) and I would estimate that most academic bloggers were either writing pseudonymously or anonymously. The fear was very real, but in my own situation I was being encouraged by Troy University to blog, the trail having been blazed by our own Professor Steven Taylor of Poliblog. The Wordhoard became a safe space where graduate students and established scholars could write without fear of being outed, and popular medieval enthusiasts could rub elbows with the experts.

I also found an unexpected role that I could relish: the promotion of other people’s blogs. I found that a lot of the traffic going out of the Wordhoard was going through the blogroll, and realized that (in the days before RSS feeds became popular) many people were using the Wordhoard as their first stop to see what was new at other blogs. Old-timer blogs like Owlfish, the Scela (the Digital Medievalist), Blogenspiel, Quod She, and In the Middle were contributing material that I could never produce, and a passel of newer blogs were emerging to become staples of the medieval blogosphere (such staples that the handful of selective links above necessarily omits many indispensible sites). Eventually people who planned to start new medievalist blogs would contact me before the first post, knowing that the Wordhoard would promote their blog and send traffic their way.

The best vehicle of the Wordhoard’s mission to promote medievalism is probably the Morning Medieval Miscellany feature, in which the Wordhoard offers a set of links for the day of new medieval postings around the internet – a daily mini-Carnivalesque, if you will, or perhaps a geekier version of the Drudge Report. With so many people using RSS feeds it is impossible to be sure exactly how many people are using the Miscellanies, but I regularly get e-mails from people reporting sharp spikes in traffic on their blogs after they are featured on the Miscellany.

As with all things online, the Wordhoard is changing today. I’ve had so many people address me as “Professor Awesome” in e-mails at and conferences and conventions that I’ve given up on thinking of Professor Awesome as an alter-ego, and instead now have an unnamed figure I call “my evil twin.” The sheer number of active medieval blogs has erupted so that the Miscellany which used to take 15-20 minutes to put together now takes an hour to 90 minutes, making it more difficult to do with regularity. Just as RSS feeds have changed the way people read blogs, Twitter and Facebook appear to be changing the blog as a medium as well, leading to challenges of parallel comment threads on blogs and their Facebook links. New applications like Google Wave are on the horizon, and I’m sure more developments are beyond the horizon now, but the blog as a medium will either evolve or die, and the Unlocked Wordhoard with it.
Posted by Jeffrey Cohen at 5:42 AM