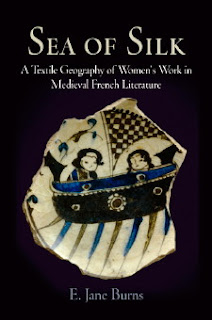 Just saw this reviewed by Laura Hodges in TMR. Here is the description from the U Penn Press website:


The story of silk is an old and familiar one, a tale involving mercantile travel and commercial exchange along the broad land mass that connects ancient China to the west and extending eventually to sites on the eastern Mediterranean and along sea routes to India. But if we shift our focus from economic histories that chart the exchange of silk along Asian and Mediterranean trade routes to medieval literary depictions of silk, a strikingly different picture comes into view. In Old French literary texts from the twelfth and thirteenth centuries, emphasis falls on production rather than trade and on female protagonists who make, decorate, and handle silk.

Sea of Silk maps a textile geography of silk work done by these fictional women. Situated in northern France and across the medieval Mediterranean, from Saint-Denis to Constantinople, from North Africa to Muslim Spain, and even from the fantasy realm of Arthurian romance to the historical silkworks of the Norman kings in Palermo, these medieval heroines provide important glimpses of distant economic and cultural geographies. E. Jane Burns argues, in brief, that literary portraits of medieval heroines who produce and decorate silk cloth or otherwise manipulate items of silk outline a metaphorical geography that includes France as an important cultural player in the silk economics of the Mediterranean.

Within this literary sea of silk, female protagonists who "work" silk in a variety of ways often deploy it successfully as a social and cultural currency that enables them to traverse religious and political barriers while also crossing lines of gender and class.


Looks great, and I intend to add it to my list. Has anyone read it?
Posted by Jeffrey Cohen at 11:40 AM

I haven't read it, but I did look at it very thoroughly at Kalamazoo back in May. It certainly continues a project she seems to have been working on dealing with the cultural logic and work of clothing and textiles. I was especially interested in her chapter on Chartres, which tangentially connects to a project I've been steadily working on since my divinity and musicological days back in New Haven.

The full bibliographic reference is:
Sergio Tognetti, "The Development of the Florentine Silk Industry: A Positive Response to the Crisis of the Fourteenth Century," Journal of Medieval History 31 (2005): 55-69

I have also posted the pdf on the site Scribd: