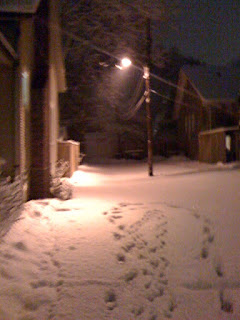 We knew from the weather forecast last night that school would be canceled today for both offspring. When I woke up early, there it was in my Twitter feed, the announcement that the public schools were closed due to the three inches of snow (!). So the kids got to sleep late. The spouse left for work, since the roads were fine and I do not teach on Wednesdays. I did some email, read some blogs, and waited for the noise to start.

Which it did at 7:25, when Katherine came pounding down the stairs demanding pancakes. Alex followed shortly thereafter, annoyed that the samurai game his sister and I had been playing was not exactly quiet morning fun. We had breakfast, walked to the store and bought craft supplies, walked to another store and secured some food for lunch and dinner, came home and decorated our rental house for Valentine's Day. Our four year old neighbor William joined us for the scissoring, gluing, taping, and sticker adhesioning: he spends a lot of time staring into our house, since his kitchen window peers into our dining room. We've been living with him for four months, so I figured it was about time he came inside and hung out with us. For lunch we made crepes with nutella, strawberries, blood orange marmalade, apple butter (we were a little late for le jour des crêpes, I admit, but it tasted better for the delay). 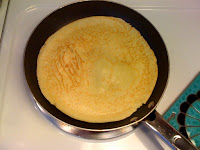 A nearly perfect day. And I was thinking that what made this day so much better than, say, the snow days we had last year, or the year before that, or the year before that, is my no longer being chair of my department. My phone doesn't ring to deliver problems from campus. My email has dwindled. My mind isn't constantly struggling to stay within the moment I am living. The ceaseless tug of that administrative job's gravity is a force I do not miss. Yes, I have plenty to keep me occupied, especially the publishing and speaking commitments that I've take upon myself, as well as GW MEMSI. But the freedom to have one day in which I could be with my kids and not worry about the price I would pay the following day is precious, and seems new.

ADDENDUM: I wouldn't want any ITM reader to take this post as an argument against doing administrative work. My philosophy has always been that those who refuse to undertake such responsibilities forfeit the right to complain when someone else does, when their departmental/university/professional culture isn't what they want it to be. The last four years have been exhausting, but I am happy that I did chair my department. It was immensely rewarding. I'd do it again in the (distant) future. But this year has been a trying one, familywise: we have been living in a rental house as we renovate our home (a renovation that uncovered a litany of problems with the 70 year old structure), Alex's bar mitzvah is nearing, my wife and I have had much going on in our respective families, yada yada yada. The time was right for the job to come to its end.
Posted by Jeffrey Cohen at 1:31 PM

they are way too few of those days - enjoy.

God - I feel guilty about inviting you to York!

Please, Sarah, no guilt! I've never looked forward to a conference so much as the York one.

And we have a great venue for the third day (your day) - the recently re-habbed hospitium of St Mary's Abbey - and a combined theatre group from Oxford and York putting on a pair of plays among other things.

I am consistently amazed at what passes for a snow day in some parts of North America. Snow? You mean a dusting of powdered sugar! If only!

ps, they twitter snow day info? what ever happened to whiteknuckled on the remote clicking thru local news programs and looking for closings in the little marquee at the bottom of the screen?

I am with you on the snow, Dan: a light dusting around here closes schools and sends everyone to the supermarket to stock up on supplies. As to cancellation announcements ... that is such an old fashioned nostalgic little picture, gramps.