Well, Okay, Go Ahead and Pray for the Horse 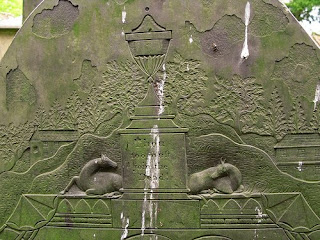 You may be familiar with the ending of the romance of Bevis of Hampton, which sees the--SPOILER ALERT! IN THE MIDST OF LIFE WE ARE IN ETC.--deaths of the hero, his wife, Josian, and Bevis's indominably loyal horse, Arondel. There follows chapel building and a general call for prayer, with an unusual addition:

(from the Teams edition of the Auchinleck version of Bevis; the Kölbing EETS edition gives a few more versions of the horse prayer lines, e.g, "And on Arundel, hys goode stede, / 3iff men for hors scholden synge or rede"; unless I'm missing it, the Anglo-Norman version has nothing of this sort; the TEAMs introduction cites "versions in Celtic, Old Norse, Dutch, Italian, even in Romanian, Russian, and Yiddish": if anyone knows whether Bevis's horse merits a prayer in these, do let me know)

I had been reading this prayer as an outlier in medieval Christianity, as prayers for animals sometimes just don't work out all that well. I think of an exemplum from Caesarius of Heisterbach's Dialogus Miraculorum in which several students play at being priests by baptizing a dog in a river; the dog, unable to bear the power of the “trini nominis” (three names), turns rabid.
Recently, though, I've been reevaluating my position on the heterodoxy of prayers for animals. Certainly, animals don't partake fully in the community of the faithful (or do they? "fully"?). Even in the Acts of Phillip, the Apostle must transform the talking goat and leopard into humans before they can receive the Eucharist, and, except perhaps in V.33.4 of Irenaeus of Lyons' Against Heresies (apparently unread during the Middle Ages), animals do not resurrect, as do humans, into immortality.

Nonetheless, what are we to make of the German ritual of the Umritt?

Beginning around 1300, peasants brought their horses into visual contact with the Eucharist on the feasts of Saint Leonhard and Saint George, patrons of knightly pursuits in previous centuries. The rite appears to have been a kind of equine communion. For this purpose churches were installed with special doors (on an east-west axis -- altars were on a north-south axis). Peasants would ride their smartly decorated animals through the doors into the middle of the church, to have them look either at the exposed Eucharist or at the 'windows' of the container housing it. The priests also prepared the horses for their meeting with the Host by blessing them with holy water. The entire ceremony was a variant of the Umritt, the most typical form of old Bavarian popular piety, which has been found in approximately two hundred places in its different versions.

Rothkrug, Lionel. "Popular Religion and Holy Shrines: Their Influence on the Origins of the German Reformation and Their Role in German Cultural Development," Religion and the People, 800-1700. James Obelkevich, ed. Chapel Hill, NC: U of North Carolina P, 1979. 20-86, at 30.

More to the point, however, for Bevis of Hampton, what about the model prayers for horses in Middle English veterinary treatises? Once again, I thank Briony Aitchison, in this case, for directing me to this edition by Willy Braekman, where the last of the four treatises overflows with prayers for sick horses:

Aske ye mannes name þat owes þe hors, and þe hew of he hors, and sey þis charme: Lord als wisseley as þis is þe first corne þat god let sow and setten on erth, also stedfastliche, if þi wil be, delyuer þis hors of fester, of worme, and of rankel. Michael in þe hel can to his brother Raphael, þe archangele, and seyde to him: Raphael wher astou ben, þat i no mith þis day sen? I haue ben in þe land of wormes; turne ageyn, Raphael, and sle ye .ix. wormes fro .i. tul .ij,. from .ij. tul iij., [and so on, counting up to .ix. and then back down again], so þat þu let not on on [sic] liue. As Raphael delyueres þe .ix. wormes, als stedfastli, lorde, if þi wil be, delyuer þis hors fro farcion [farcy] and of racle [fester/putrefaction] and of all wormes, and ys is proued for soth.

Another prayer (p. 103, #63] in the same work similarly calls in the big guns, while also suggesting a kind of pantheism:

Of course, the difference between Arondel and a sick horse is that Arondel is dead. What good would the power of the stars, the 100 abbots ready to sing on midwinter night, and so forth, do for a dead horse? Does Arondel's soul need to be sped through purgatory? Presumably not, and presumably, then, the ending of Bevis merits this modern-day inquistor's suspicion of, at least, heterodoxy.

On the other hand, with the Umritt in Germany, with the practical, late-medieval advice to call on, well, everything to cure one's horse, and, heck, with medieval-modernish animal blessings occuring in my little town, maybe it's time, at least in my next big project, to radically reevaluate my convinction that nonhuman animals are present in the Christian body only as its inexcluded other?

Surely by now somebody has pointed it out, but on the off chance they haven't, I really think you should consider the fact that All Dogs Go to Heaven.

CP, indeed, I've more than once worked a 'in short, for mainstream medieval Xian resurrection doctrine, all dogs most certainly did NOT go to heaven' into a lecture.

(incidentally, I literally lol'd at "Also, most of these books are about jumping")

I rode in a fox hunt during my teenage years (no foxes harmed in our zany pursuits!) and every year we participated in the Blessing of the Hounds. They're pretty clear in linking the tradition to St. Hubert as per this blog post.

Though it's also a question of provenance, right? Animal as inexcluded other in mainstream theology is one thing; blessings over animals that are local traditions, charms and conjurations for the preservation of animal health that look like they are part of an agrarian world (the charms remind me of John the Carpenter's blessing against elves in the Miller's Tale, and the Pardoner's suggesting his relics can cure cattle illnesses for his rural audiences) ... well, maybe these aren't quite the same world.

Nor, of course, is that of Bevis of Hampton.

I wonder if the Prioress in CT prays for animals departed. She certainly seems concerned about "deed" animals, from "a mous Kaught in a trappe" to any of the "smale houndes," which she feeds "wastel-breed" perhaps a version of the eucharist.

I'm reminded of a few things:

The cited prayer sounds like a) the Breastplate of St. Patrick and similar prayers and b) related to those prayers are exoricisms which this prayers sounds a bit like as well

St. Francis of Assissi and the Canticle for the Sun also known as Canticle of All Creatures. Moreover is Francis' concern for animals, preaching to them and so on. Might be an influence here.

There's also the whole "hocus pocus" thing....a bastardization of hoc est corpus. But I seem to remember reading somewhere that the bastardization arose from the poor trying to give their animals the eucharist and butchering the words of institution.

Not sure if any of that helps, but thanks for bringing this to my attention...now I'll have to read Bevis. Without Butthead. Or Cornholio.

There is a Yiddish version of Bevis of Hampton "Bovo-Bukh". Admittedly, we know it from Elia Levita's early 16th version, so that's a bit late. Nevertheless, I wonder about the implications of translating this material not just into Yiddish, but into 'Jewish'.