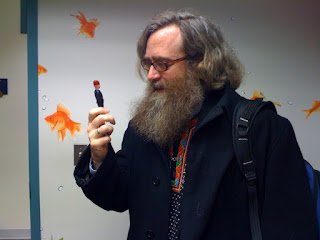 [illustration: a well known medievalist-ecocritic meets a Tiny profligate, scolds him for his carbon footprint, shortly after a recent GW MEMSI event]

Quite a storm is descending upon DC, mighty enough to provoke terse poetry. Trending now on Twitter are snowpocalypse, snowmaggedon, snOMG (often with a #2 appended, since this storm is the second substantial incursion of Ullr* into the DC area). The GW campus is closing soon, my kids are already enjoying their early release from school, we Cohens are cozy in our house with its view of the gridlock that is Wisconsin Avenue. We have enough food to last at least another day or two. The flakes have been quietly tumbling for about an hour. Beauty, so far, with the danger yet to come.

The behavior of all DC's residents seems to have been profoundly altered by knowledge of impending storm. So on this day of nearing winds and mounting snow it is difficult not to think about the environment's impingement upon human subjectivity.

Readers of this blog know I've long been a fan of the work of Alf Siewers. I've taught his work in my graduate seminars. I've suggested his work be anthologized (read Eileen's comment at the bottom of the link). I happily blurbed his book Strange Beauty: Ecocritical Approaches to Early Medieval Landscape:


“Strange Beauty is an outstanding addition to medieval cultural studies. The volume combines philological rigor, meticulous research, an engaging writing style, a fascinating set of questions, and a theory-savvy, innovative line of research. Siewers' book will put environmental approaches to medieval literature and culture on the critical agenda. The geographic and temporal dynamism that it allows its texts is inspirational. Well-chosen as well is the emphasis upon the Otherworld, the perfect imagined geography through which to think the project’s cluster of questions. Strange Beauty is, in a word, brilliant.”

That's a start, but it doesn't get at everything I like about the book. Some other contributions Strange Beauty makes to medieval studies:
I could go on. Instead, though, I'll share this paragraph from Strange Beauty that has lodged itself in my imagination and almost -- almost -- has convinced me to try kayaking. It takes place at the confluence of the Susquehanna River near where the book was written (central Pennsylvania: Siewers teaches at Bucknell):


A confluence of cultures spreads physically physically below the bluffs, a confluence of temporalities and of flows in human, geological, and ecological networks that entwine and articulate themselves reciprocally, a confluence that is physical yet also narrative and imaginative … Such a sense of environmental confluence is largely unrecognized and unsung in current global narrative art, iconography, landscape, and history … But this confluence, figuratively and topographically, remains a type of geography of desire, a landscape emanating connective narratives of a region that link the bodily and the textual, akin in these respects to the ancient and largely lost Celtic Otherworld.

That Siewers can make the Otherworld palpable at a contemporary river as well as in the pages of a book is the best indication of his achievement here. Ecocriticism has been long in coming to medieval studies: always on the horizon, it never seemed to have arrived ... until Strange Beauty came along.


*reputed Norse god of snow, and patron of obscure allusions on blogs
Posted by Jeffrey Cohen at 1:52 PM

OK, Alf already looked like a wizard in training when he left Illinois the year after I got here. Now he's totally channeling Radagast the Brown. :)

The last time I read a review like this, Cary Howie's "Claustrophilia" and that turned out very very well, so i'll not waste another minute, hello Palgrave-Macmillan. Thanks...

thanks for introducing me to Siewers work, I've got another thing to study...