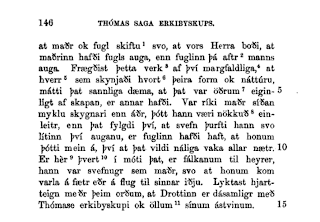 As a lingering flu drags me through the weekend, I offer you a brief story, which involves some ongoing themes of ITM: animals; disability; and the technological and organic supplementarity of the posthuman body. Please turn in your hymnals to the 97th Chapter of the fourteenth-century Thómas Saga Erkibyskups, which belongs, as you might have guessed, to an Icelandic Life of Thomas Becket. Here you will find a tale of Thomas' peculiar solicitude for a hawk that had accidentally put out its eye during a hunt. The falconer decides to seek help at Thomas's shrine at Canterbury, but on his way there, he meets a flock ("flokkar") of noblemen, one of whom mocks him for his quest:

the mighty man breaketh out fiercely, saying that it is a most unchristian work to call in the aid of a holy man in such a matter, 'or deemest thou,' said he, 'that the archbishop carest, whether the carrion-bird hath two eyes or one?'"

(the translation is Eiríkr Magnússon's, not mine)
The falconer bravely makes his way to the shrine, where he once again encounters the mocking nobleman, who, in the meanwhile, has lost an eye to the plucking mystic hand of Thomas ("For shortly after our parting it seemed to me, as if the bent finger of a man moved toward my eye, doing me such harm as to gouge it out unto the cheek"). Having made his point, Thomas makes all well...sort of.

This matter we may bring to an end without prolixity by relating that in a wondrous manner God the Lord so ruled it, that the man and the bird underwent such a change, according to the command of our Lord, that the man had a bird's eye, but the bird got back a man's eye. This miracle became far-famed and manifoldly for this reason, that whosoever inquired into the form and nature of either eye, could judge truly, that by creation it was natural to one, what the other had. Now ever afterwards the lord was much more keen-sighted than before, though he was somewhat odd-looking; but with this it went that he needed so little sleep for the eye which the bird had had, that he deemed it a right troublesome matter, as it would be awake through nearly all the night. The hawk's case was the contrary; he being as sleepy as a man is wont to be, so that he might scarcely be roused to his feet or to flight to do his work. This miracle endeth with the words that the Lord is made glorious through archbishop Thomas and all his beloved ones.

I discovered this miracle through Briony Aitchison's stupendously researched "Holy Cow!: The Miraculous Cures of Animals in Late Medieval England," European Review of History 16.6 (2009): 875-92, about which more later (briefly, though: if you thought animal resurrection stories occured only in Christianity's Celtic periphery, then clearly you're not a devotee of Henry VI). Apart from the Aitchison's analytic catalog, my chevauchée through my college's electronic databases has turned up little: e.g., a glancing reference to the miracle in Robin S. Oggins' Kings and Their Hawks: Falconry in Medieval England (p. 104), and a more sustained discussion of the saga itself in Haki Antonsson, "Two Twelfth-Century Martyrs: St. Thomas of Canterbury and St. Magnús of Orkney," in Gareth Williams and Paul Bibire, eds., Sagas, Saints and Settlements. Leiden: Brill, 2004, 52-64. Clearly there's more to be done!

So many ways in! The miracle's most obviously about the social capital of falconry, although this straightforward reading runs aground on the conflict between the falconer's working piety and the properly anthropocentric piety of idle rich whose class the falconer serves. We require a more nuanced analysis attendant to the bonds between huntsmen and their animals, which may make up communities independent of the needs, desires, and values of their mutual masters.
Alternately, the miracle may be just as obviously about Thomas's expansive regard for all life and all prayers, regardless of how absurd (credo quod absurdum est): not so expansive, however, since what happens to the birds that the hawk kills for a living? In this, then, a clear instance of the logic of the pet, which is nowhere so evident as in the carnivorous community formed by the falconer and falcon? But a good reading must recognize that the logic of the pet may not be sufficient to explain what happens to the human caught up in the supplementarity of the bonds of love and sympathy (reread Jeffrey's beautiful post below). With Jeffrey's work in mind, we may recognize the story as a site of fantasy for (im)possible bodies beyond the pedestrian fantasy of merely human and animal identities.

The story may, too, be about the privilege accorded the eye as the organ of reason, with an implicit suggestion that humans are disabled compared to hawks in this regard. What happens to the notion of human disability when it's thought of less anthropocentrically? It's a longstanding cliché that humans, lacking fur, claws, speed, devoted themselves to creating suitable accommodations to mitigate and indeed overcome their relative weakness (see, for example, Origen, Contra Celsus, IV.76, for which reference I thank Nicola Masciandaro's Voice of the Hammer).
And what happens to the integrity of the human body presumed by the liberal humanist subject (the bête noire of posthuman theory!) when organs, human or animal, are technological supplements in a vertigineous system that may be supplementary all the way down?
Posted by Karl Steel at 3:33 PM