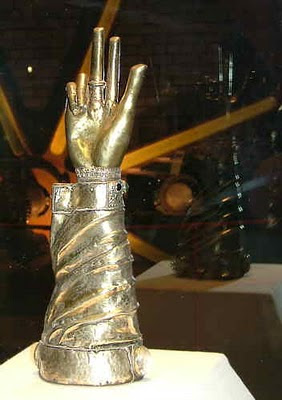 Some ITM readers might recall that last winter I wrote three posts [here, here, and here] on the published essays and "erotohistoriography" of Elizabeth Freeman, an Americanist, cultural critic, and queer theorist at UC-Davis, whose thinking on affect, temporality, bodies, and historiography shares much in common with some of my favorite premodernist scholars, such as Carolyn Dinshaw, Aranye Fradenburg, Bob Mills, Virginia Burrus, Karmen Mackendrick, and Carla Freccero. As I shared in those earlier posts, Freeman's erotohistoriography names a practice of tracing histories written on queer bodies--more precisely, it traces “how queer relations complexly exceed the present,” and “against pain and loss” [predominant tropes in contemporary queer studies], it “posit[s] the value of surprise, of pleasurable interruptions and momentary fulfillments from elsewhere, other times” ["Time Binds, or Erotohistoriography," Social Text 23.3/4 (Winter 2005): 57-68], calling to mind Dinshaw's recent call for a "postdisenchanted temporal perspective" [“Theorizing Queer Temporalities: A Roundtable Discussion,” ed. Elizabeth Freeman, GLQ 13.2-3 (2007): 177-95]. It is because Freeman's work, moreover, is so generous in its engagement with work by other scholars working in diverse and earlier historical periods that BABEL invited her to Kalamazoo last May to participate on a panel on the question of pleasure-in-scholarship with Dinshaw, among other medievalists.

Freeman has a book forthcoming from Duke University Press, Time Binds: Queer Temporalities, Queer Histories, which I am very much looking forward to reading; in the meantime, she tells me that she will soon be giving a talk at NYU, "Historicizing Erotohistoriography" [Feb. 23rd, for the Center for the Study of Gender and Sexuality], and while she will be focusing on Romantic-era sentimental historiography [primarily via Mike Goode's work: Sentimental Masculinity and the Rise of History, 1790-1890], as well as commenting on Frankenstein and Virginia Woolf's Orlando [in relation to modernist thinking on Benjamin's "constellation"], Freeman would also like to "at least introduce the question of medieval erotohistoriography, more for conversational purposes than for claiming any authority over the domain." Freeman has been thinking more specifically about relic worship in the Middle Ages [we might say, late antiquity through the Middle Ages], partly because the two novels she will discussing include all sorts of scenes involving the veneration and even violation of bodily parts, and the questions she has for us here at ITM are:

Is there a divide between the kind of relic veneration that traffics in sacred/eternal time and the kind that traffics in what we might think of as a more properly event-centered "historical" time, i.e., pieces of the true cross? Is there any work on the erotics of relic worship (I know a bit about reliquaries, but not much else)? Is it just stupid to even want to think of reliquary practice as having anything to do with history?

Of course reliquary practice has much to do with history, but it also has its own peculiar temporal [and bodily] schemes, and I am hoping that our readers can maybe jump in here and point Freeman in some fruitful directions. I have already recommended Caroline Walker Bynum's work to her [especially Fragmentation and Redemption and The Resurrection of the Body], and I will now recommend also Karmen Mackendrick's Word Made Skin: Figuring Language at the Surface of Flesh [especially the chapters on Biblical resurrection stories and touch, "Word Made Flesh" and "Touch," and the conclusion, "Figures of Desire"]. Any other suggestions or ruminations upon her questions above would be greatly appreciated.
Posted by Eileen Joy at 11:42 AM

Not quite on topic, but I just last night finished Frankenstein's Bride, by Hilary Bailey, which might be an interesting text to read in tandem with Freeman's new text dealing with erotohistoriography and Frankenstein. I found the book rather compelling, more than just the genre exercise it seems to be for the first 10 pages or so.

Sometimes things in the universe seem very felicitously timed. One example is finding a list of things to read that coincide nicely with Kalamazoo papers that will soon need writing. Hurrah! The paper, by the way, is on virgins and classical allusion in Aldhelm.

Thanks, Eileen and ASM (I must read B of F, clearly). And good luck with the paper, Peter. For what it's worth, I am fooling around with *St. Erkenwald* on the recommendation of my colleague Claire Waters, and with at least some of my other colleague Seeta Chaganti's work on reliquaries in mind. Seeta's book has given me permission to at least think of the daisy-fresh corpse as enshrined in a reliquary. No doubt I will butcher the actual text-- at the very least, I can't close-read it -- but the point is really to raise some points of conversational contact in several different fields, even if the medievalists present mock me. But then again, any medievalist who comes to hear me speak is likely to be the kind who works for good, not evil.

Elizabeth: if you are interested in St Erkenwald, I also strongly recommend a short paper my friend and colleague here at ITM, Karl Steel, wrote for a symposium dedicated to Cary Howie's scholarship that was held last November at George Washington University, and which has many resonances with your own thinking on re-wiring historicist economies, "Will Wonders Never Cease?":

You will note that, in his paper, Karl cites the work of your colleague, Seeta Chaganti.

And EF, there are translations of the Middle English Erkenwald available. I'd recommend reading it in the Casey Finch, ed and trans, The Complete Poems of the Pearl Poet.

I don't have anything in particular to offer on the specificity of time-bound relic worship vs. relics that belong more completely to eternal time. Patrick Geary's Furta Sacra might, however, direct you to some good stories. On the erotics of relic worship, I think of this story in Herman Pleij's Dreaming of Cockaigne:
"Joos van Ghistele . . . on his way from Ghent to the Holy Land in 1481, was dismayed to find that a bit of flesh was missing from the arm of the centuries-old corpse [of Jan van Montfoort]. Upon inquiry it appeared that a descendent had taken a bite out of it, after being denied a relic of his hallowed forefather" (123).

For another, good glossed edition of the ME Erkenwald, see John A. Burrow and Thorlac Turville-Petre, eds, A Book of Middle English (3rd ed., 2005).

Over at the Facebook, Michael O'Rourke suggested looking into Chaucer's Pardoner. Here, Robert Sturges' Chaucer's Pardoner and Gender Theory: Bodies of Discourse and especially the stuff on the Pardoner's relics in Glenn Burger's Chaucer's Queer Nation might be useful, as might a recent article, Robyn Malo, "The Pardoner's Relics (and why they matter the most)" Chaucer Review 43 (2008): 82-102, which I think speaks to the desire and desire to see in particular, which works well with Chaganti's book.

Also, it looks as though you can find a good intro to relics in Ronald C. Finucane, Miracles and Pilgrims: Popular Beliefs in Medieval England, Chapter 2, "The Holy Dead and Their Relics," 25-38. This doesn't speak directly to what you're doing, but you should be able to engage with these stories with your interests quite easily.

Hi Elizabeth (and others),

The eroticism of relics should be much more written on than it is. I very briefly discuss the topic in a a conference paper that I gave for a session Eileen organized for SEMA 2008, which I'd be happy to email to you if you'd like. (I haven't figured out how to post it to ITM).

I'd also suggest taking a look at the contemporary veneration of relics. There's a large collection at St. Anthony's chapel in Pittsburgh, which the local PBS did a story on not too long ago. What interests me is that the question of whether the relics can or should be touched never seems to come up; much of the discussion about them seems to want to minimize their materiality, as if it were embarassing to acknowledge. So I wonder where the authenticity of the relics now comes from if not their material embedding in history, and where the relics' emotional power comes from if not from the imagination of tactile contact.

Hi everyone -- thanks so much for the helpful comments (and sorry for the delay in my reply). Lara, I would love to see your conference paper. You can e-mail it to me at esfreeman@ucdavis.edu.