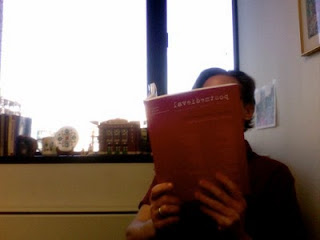 I've been slowly making my way through the inaugural issue of postmedieval (free in its entirety during May here), savoring the essays. "When did we become post/human?" is quite an issue.

So far the only essay I've had a substantial disagreement with is Crystal Bartolovich's "Is the post in posthuman the post in postmedieval?" (18-31). Though twice as long as any other piece in the volume, its thesis is quite straightforward: Bruno Latour's methodology in We Have Never Been Modern "denies the possibility of progress and therefore implicitly disparages the struggles for inclusion by those peoples currently excluded from access to the range of choices concerning day-to-day existence that privileged peoples take for granted" (20). Latour is anti-progress in that he has no faith that the world gets better as time passes; though he stresses deep continuity across long periods (in a way that tends to be skeptical of time itself, at least as  causal agent), he isn't anti-change or anti-history. In Bartolovich's account, though, those who follow Latourian actor-network theory assist "globally privileged populations" in their schemes to deprive others of access to health care, clean water, education. Bartolovich goes so far as to label much of the practice of posthumanism unethical, since its modes of interpretation seem to prefer viruses and household pets over "human infants in the Sahel" or "a child in the banlieues."

But let's keep the baby in the bathwater for a moment and not throw anything out so hastily. We Have Never Been Modern is, admittedly, not my favorite book; I believe his method is clearer in Pandora's Hope, and better practiced in his more experimental pieces like Aramis or the weird closing section of The Pasteurization of France. Still, there is much to be learned from We Have Never Been Modern -- and David Glimp makes that point cogently in his contribution to postmedieval, "Moral Philosophy for Cyborgs" (72-79). Glimp describes Latour's project as an inherently ethical one: an attempt to "develop the tools with which to imagine and to bring into being non-apocalyptic futures, to create less threatening realities." Latour is a utopianist ("his work [is] an instance of utopian counterfactual imagining designed to jolt us into a revitalized awareness of our world and how we inhabit it" 77), his book a "thought-experiment" as well as an argument for reconceptualizing the place of the human in the world. Despite the title of We Have Never Been Modern, Latour is (Glimp argues) quite a modernist, alarmed that "life is growing ever more complex" (77), that we teeter at an edge over which is self-extinction. Latour offers his political ecology as a way of drawing back from that abyss, of rethinking what it means to inhabit a safe world. I love these closing lines of Glimp's essay:


As a literary scholar, I thus see the concerns of this particular version of posthumanism as inviting us to view anew literary texts as engaged in the process of articulating, contesting, adjudicating, travestying or otherwise playing with understandings of risk and with possible ways of rendering the world less harmful. This is to see works less as bearers of themes -- which they certainly are -- and more as artifacts that create occasions for collective life and for modifying the experience of being together in the world (78)

In this beautiful passage Glimp is expressing ideas closely related to the thesis of Judith Bennett's Vibrant Matter, another work that finds in Bruno Latour not the buttress for a privileged world, but the critical means for rethinking how the human and inhuman intertwine, in the hopes of rendering that world more just.
Posted by Jeffrey Cohen at 1:12 PM

Neat discussion as usual. It seems to me that the whole orientation toward progress itself can be a source of oppression of the less privileged. Even in premodern times certain colonial projects presupposed a kind of oppressive progress, often constructed in retrospect (Anglo-Saxons over the natives etc.). Lawrence Buell talked in ecocriticism a while ago about re-reading early texts and traditions to help uncover resources in them for alternative ecological futures, which seems to me potentially part of the postmedieval project. As for ethics and ANT (which I am slowly working on getting up to speed about with help from this blog!), I'm using JC's good essay from Postmedieval on stones in a course in the fall focused on environmental ethics. Meanwhile, in my skimming so far of Bennet's Vibrant Matter (due to time constraints, I want to read it more carefully soon but am enjoying it a lot), I do think at the end her binarization of ecological mindedness and "vital matter" is a bit limiting--it seems to me that an effort to interweave the two could lead to a creative ethos related to the original sense of ethos as habitat. But I'm still just getting up to speed on ANT with help from this blog! (And still pondering how to connect Levinas' insights on ethical responsibility to the speaking face with the non-human...)

Just a quick word to Alf on thinking through Levinas's thinking on the ethical relation to the face vis-a-vis the nonhuman. Of course, Levinas's project feels very anthro, but begin first with the understanding that, for Levinas, the "face" is not really a face, per se [not a humanly physiological visage], but rather, an “exteriority that is not reducible. . .to the interiority of memory.” It is an expression of being that “overflows images” and “breaks through the envelopings” and facades of material form, exceeds any possible preconceptions, and calls into question the subject’s “joyous possession of the world.” At the same time, because “the body does not happen as an accident to the soul,” the physical face is the important “mode in which a being, neither spatial nor foreign to geometrical or physical extension, exists separately.” It is the “somewhere of a dwelling” of a being—of its solitary and separated being–with–itself. [These citations are from "Totality and Infinity."]

So, I think Levinas's emphasis on the face as a sort of exteriority that cannot be reduced to interiority and which "overflows" all images, at the very least creates an opening through which to begin thinking through an ethics based on a face-a-face-sans-intermediare relationship that could go from human to nonhuman and vice versa. I also think Graham Harman's ideas on the relations between "sensuous" [versus "real"] objects also leads in that direction.

Except that with Harman there is always an intermediary--there can be no actual "touching" between objects, all of which are somewhat "sealed" off from each other, but whose "depths," so to speak, are endless, unplumbable, and seemingly infinite. There is, of course, the "speaking" attached to the face that Alf also mentions--Levinas puts a great emphasis on "pacific" relations through language: for a “positive deployment of the pacific relation with the other, without frontier or any negativity, is produced in language. Language does not belong among the relations that could appear through the structures of formal logic; it is contact across a distance, relation with the non-touchable, across a void." But what kind of "language" *is* this, exactly? I think that remains, even in Levinas, fruitfully open.

Thanks for this post, JJC. I'm quoting that bit of the Glimp in a footnote in my book, and if I had time, I'd quote the Buell Alf mentions, which sounds so useful. If you're curious,
"Animal futures different from Aquinas's can be imagined, whether for the Middle Ages or for a present that persists in thinking other life as only an instrument (consider, for example, the common argument that species diversity must be preserved from human rapaciousness, since the loss of species might mean the loss of some as yet undiscovered cure for (human) cancer). Such futures do not require severing any connection to an abandoned, benighted past; indeed, such a break is impossible. Yet a new future is still possible. In The Parallax View, Žižek argues that a free choice neither breaks entirely with the past nor is purely, mechanistically caused by it; rather, a free choice “changes the future by changing the past itself (in the Bergsonian sense of inserting a new possibility into it).” Causes for new futures can be found in those pasts that could not help but imagine humans in a paradise shared with birds, grass, trees, or, for that matter, lions; in those exempla that picture, almost despite themselves, an unnameable devotionem porcorum; in those scriptures in which a baptized beast, a savior to an apostle, returns to its wilderness life, saved but indifferent to human society. Through all these pasts, selected from a past that, like all pasts, is not homogeneous, humans might give themselves to another future in which no life or indeed no thing (if such a division can or should be sustained) might be treated as a mere end."

Alf, there's also good material on 'Levinas's ethical relation to the face vis-a-vis the nonhuman' in Matthew Calarco, Zoographies, and David Morris, “Faces and the Invisible of the Visible: Toward an Animal Ontology,” 124-69 and Lisa Guenther, “Le flair animal: Lévinas and the Possibility of Animal Friendship,” 216-38, both available here.