It's Never Enough, or, On Being Fucked Up 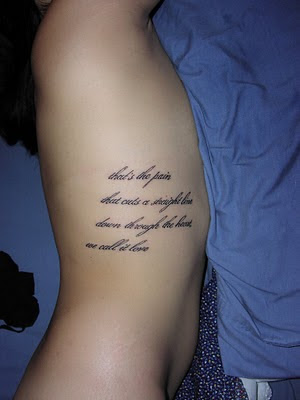 Special Note: don't forget to read and consider signing our open letter to the Medieval Academy of America concerning their annual meeting being held in Arizona in April 2011.

Figure 1. a tattoo tribute to Plato's Symposium and Hedwig and the Angry Inch; inscription: "that's the pain / that cuts a straight line / down through the heart, / we call it love."

All beauty comes from beautiful blood and a beautiful brain. . . . your very flesh shall be a great poem and have the richest fluency not only in words but in the silent lines of its lips and face and between the lashes of your eyes and in every motion and joint of your body. . . . What balks or breaks others is fuel for [my] burning progress to contact and amorous joy.
—Walt Whitman, "Preface," Leaves of Grass (1855)

For this year's Congress on Medieval Studies at Kalamazoo, Anna Klosowska and Nicola Masciandaro organized two panels on the "post-absymal" that featured papers by myself, Nicola, Erik Butler [our non-medievalist interloper from German studies], Irina Dumitrescu, Dan Remein, Heather Bamford, and Cary Howie [with a response-poem by Michael Snediker and response by Anna]. The somewhat loose, working description of these panels, as they were first conceptualized about a year ago, was this:

The panelists are united in their belief that: 1) the study of medieval texts is aided, clarified, and furthered by a serious inquiry into the conditions and modalities of theoretical frameworks; and 2) a serious engagement with theory today calls for a reassessment of the Continental tradition, including the primacy of death, the supposed inaccessibility of meaning, and the linguistic turn. We want to argue against the “lack” model of theory as it stands today. This session, thus, is resolutely “post”: post-post-modern, post-lack, post-humanist, post-Heideggerian, post-Blanchot, post-silence, post-death, post-speculative realism, even. With Michael Snediker, our Respondent, we create “epistemologies not of pain, but of pleasure; aestheticize not the abdication of personhood, but its sustenance” (Queer Optimism: Lyric Personhood and Other Felicitous Persuasions); with Alain Badiou, we want “a theater of capacity, not of incapacity” (Handbook of Inaesthetic), as we “return to the place of life” (Saint Paul); and with Giorgio Agamben, we want to speak the “language in which the pure prose of philosophy would intervene at a certain point to break apart the verse of the poetic word, and in which the verse of poetry would intervene to bend the prose of philosophy into a ring” (Language and Death).

It was thrilling to hear all of these papers, which variously covered the subjects/figures of the commonplace, anagogy, disorganization/being fucked-up, smallness/radiance, melancholy/violent excitement, scars/closeness, the predicate "as if"/devotion, as well as the questions and matters of: 1) Why should our day be more vital than earlier ages, which confronted problems that have hardly vanished with time? Is it not possible that our era of digital reproduction, automation, and mass-mediated spectacle is less alive than any other? The demarcation between “now” and “then” has been erected to hold events in place artificially. Only when the border is suspended can the future — whether “post-modern” or “post-medieval” — appear. The eternal (should it exist) is not lighted by a sun in the process of combustion and self-extinction [Butler]; 2) Where is the anagogic sense now? Where has it gone? Nowhere. The anagogic sense is always present. Every hermeneutic realizes some form of non-dualistic psycho-sensual fulfillment. Every thought and interpretation revolves around a taste for something immanent to itself. The issue is: what? [Masciandaro]; 3) the possibility of a poetics of vertiginously small places, whose radiant unreadability (re)produces a literary modernism with a medieval heart capable of flouting the lack which would prevent a certain queer mixing of persons, things, pasts, presents, literary spaces and ‘real’ places [Remein]; 4) it is through the experience of sorrow, compunction and a sense of loss that deep reading — and laughter — may come [Dumitrescu]; 5) by accepting what Hans Gumbrecht might call "scars" (The Powers of Philology) on medieval artifacts as potential sites of contact with the past and by permitting discussion of the fuzzy questions regarding their creation, a different sort of contact with the medieval, albeit not a cognitive or historical one, can be brought about [Bamford]; and 6) the places where hope and cynicism meet, where the "as if" becomes not merely wishful but, in fact, effectual, and also opens the way to something like a literary-theological practice without the orthodoxy of having to sort what is right from what is wrong [Howie].

Within the next week or so, I hope to have posted most of the papers on the BABEL Working Group's web-page for this year's Congress, so that everyone can read them, but in the meantime, I thought I would share my own paper with you here. I must say that, where we started with our call for papers and where we all ended up represents, um, not an entirely coherent process [but in some sense, valuing incoherence as a "good" in the critical thinking/interpretive process was a big part of many of our papers]. On the one hand, we wanted to think a little bit about how to get beyond what might be called the "abysmal"/death drive-driven discourses that inhabit so many spaces in the university right now [although one of the insights that came out of our sessions is that it is not always a question of trying to get out of or beyond the abyss so much as it might be a matter of figuring out different ways to "live" there that could be hopefully conducive to more sustaining, affirmative, and in Cary's terms devoted modes of critical thought]; on the other hand, we wanted to experiment/play around with figures and modes of critical thought [sadness, anagogy, anachronism, smallness, as-ifness, closeness, disorganization, etc.] that might allow for certain "new" ways of looking at/getting close to/thinking about the objects of our studies that might get us beyond the "lack" theory of everything. And for some of us, getting deeper into the "abysmal," even enjoying it, was precisely the point.

For myself, I wanted to try and formulate, by way of the figure of Alcibiades in Plato's Symposium and also Eve Sedgwick's queer little gods [an idea/figure she was working with shortly before she died in relation to the works of Cavafy and Proust], the ways in which thought and affect can never be disentangled from each other and how thought/philosophy could never really stand outside of the bodies [and their mainly disorganized/fucked-up affects as well as their shining queer little gods] that "speak" philosophy/thought. There is, in a sense [for me, anyway], no Outside to thought, no pure space of negativity out of which or from which thought could ever begin, much less sally forth into the world as a critical methodology somehow shorn of affects [which is to say, shorn of bodily tremors and tics]. Philosophy, or thought, as an attribute of speaking/thinking bodies, is itself an affect, a form of feeling that also has the potential, in Alcibiades's own words, to strike us like lightning, to wound and hurt us, to burn us, literally, from the inside out. On that note, here is a link to the full text of my remarks:

It's Never Enough, or, On Being Fucked-Up