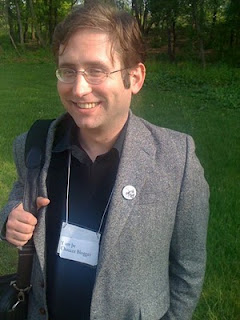 The reveal happened at 6 PM last night. About a hundred people had gathered in one of those lounges that dot the Kzoo dormitories. The champagne flowed, anxious eyes cruised the room, everyone whispering theories. Bonnie Wheeler in her deviousness had distributed scores of "Y am the Chaucer Blogger" stickers, so it seemed the lounge was filled with People Who Might Be He. The heat in the room was nearly as unbearable as the sense of expectation. At 6:15 Bonnie ascended to a table top and asked, "Are you ready to learn the secret identity?" As everyone shouted YES, a man who identified himself as John Gower (and looked uncannily like Bob Yeager) ran forward and announced "I am not a wanker!" Bonnie acknowledged that Gower might not be -- contrary to many assertions on the Chaucer blog -- a wanker after all, and then asked Chaucer to come forward. Silence, and eyes everywhere.

There was a gasp. I heard some people say "I KNEW IT." But then I laughed and said, "Just kidding" (Bonnie had put me up to the stunt). "It's Brantley Bryant."

Brantley smiled and raised his glass of champagne. The crowd applauded enthusiastically. And with copious bubbly and a sweaty book signing the greatest mystery in contemporary medieval studies came to its end.