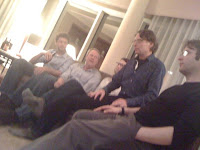 Monday, gray rain, and an office full of papers in folders and in stacks and in small messy strews. Before the return to that which must be done, though, some lingering over Michigan pleasures enjoyed.
What did I miss? Please add your own observations in the comments below.

Your postmedieval blurb certainly didn't seem like hyperbole to me. It was definitely an "event." Lots of people were excited to get a copy, trying to get a copy, eager for a yoyo, etc. Between the Chaucer Blogger Reveal and the postmedieval launch, Palgrave had a pretty good week, I think.

And the yoyos led to important questions like, "Who is the Yoyo? Is it other scholars? Is it I? Is the embrace of our Yoyo-hood a positive development in humanities scholarship? Who yoyos the Yoyos?" Well, I can safely say that we have met the Yoyos, and they are us.

Granted, this discussion took place during wine hour, which is peculiarly suited for meta-conversations about swag. Nevertheless, I am very happy to have both my yoyo and my copy of postmedieval.

Tom: oy on the yoyo puns. Eileen: and whose idea was it to have a medievalist piling contest? Hmmm? I get mocked for making everything a contest but you know, we have to let our competitive sides out somehow.

I hope you sent Dan home with a copy of postmedieval for me. I am itching to get my hands on a paper copy!

Yes, I packed twenty of them into his bookbag. I am certain he will give you one.

Sadly, I forgot my copy of postmedieval on the table at the reception. JJC distracted me from everything else. But I still have my yoyo, and my yoyohood.