The Plateau of the Middle and the New Irrationalists: Get Ready for the Confraternity of Neoflagellants 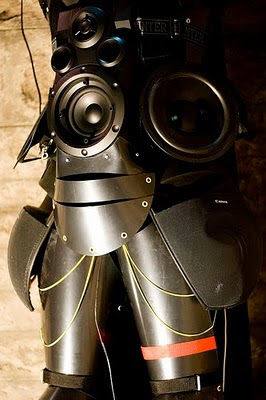 Our pasts live in us now; we cannot address the historicity of our present moment without understanding the pastness in that historicity, the deadness in our living, the ineluctable retrospection of our desire, just as "our" past is not ours, but was inevitably also the past of others. . . . No engagement of otherness will preserve either the subject or the other in an identity which should already have been theorized as unstable in the first place; but by that very token, we know, precisely, that the other "has been" encountered. Of this we can be sure; indeed it is a species of arrogance to think otherwise. . . . Insofar as history is always and inevitably retrospectively constituted, insofar as the work of signification is inseparable from memory and desire, insofar as the passional and the technical coincide in the register of our jouissance, we could not, even if we wanted to, stop creating, or more properly re-creating, new prostheses of memory.
--L. Aranye Fradenburg, " 'So That We May Speak of Them': Enjoying the Middle Ages"

Not too long ago, I was contacted by Norman James Hogg [recent M.A. in Visual Culture, Univ. of Edinburgh], Simon O'Sullivan [Senior Lecturer in the Dept. of Visual Cultures at Goldsmiths, Univ. of London], and Neil Mulholland [Assoc. Head, School of Art, Univ. of Edinburgh], who have recently created a visual artists collective, "The Confraternity of Neoflagellants" [as their own literature puts it: "The Confraternity of Neoflagellants was founded in 2009 by Serjeant-At-Law Norman Hogg and joined by Keeper of the Wardrobe Neil Mulholland. It is a secular and equal opportunities confraternity bound by chirograph."]. They have a dead-serious [and delightfully ludic] set of interests in investigating neomedievalisms and what they call "premodern futures." As Neil puts it on his Academia.edu website:

"The relentless association, from the Renaissance onwards, of the Middle Ages with the ‘hypereconomy’ of the gift, with whatever exceeds calculation or rationality, for good or for ill, has made the Middle Ages a marker of fantasy and excess." The Confraternity of Neoflagellants are lay peoples dedicated to the ascetic application, dissemination and treatment of neomedievalism in contemporary culture. They are attuned to the scent of medieval analogies relating to the (creative) commons, the folkmote/folksonomy, the plateau of middle, post-post-industrialism (Goth, silvercasting, experience economies) and to geopolitical debates in the current era of ‘zombie capitalism’ and the ‘new irrationalism’.

Our premodern futures have particular resonance with what Howard Rheingold once prophesied as ‘the virtual community’. The Confraternity want to make these connections explicit by engaging with online culture both in the content of the work we are examining (which includes ambient technoculture and the ludic spaces of video gaming) and in the form that it manifests itself. 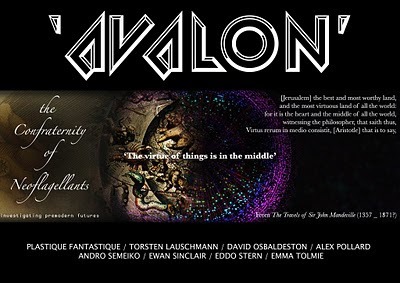 They recently staged an art installation @ Embassy Gallery, Roxy Art House, in Edinburgh, "Avalon," which ran under an epigraph from Aranye Fradenburg [the first sentence/quotation in the two quoted paragraphs above], and you can see images from that installation HERE and HERE [also: click on the poster at left to read the fine print and note the resonances between many subjects dear to ITM and the Confraternity!]. As the Confraternity describes the exhibit:

‘Avalon’ is the first curatorial investigation into premodern futurity by The Confraternity of Neoflagellants – lay peoples dedicated to the ascetic application, dissemination and treatment of neomedievalism in contemporary culture. Borne of the ‘new irrationalism’ of ‘zombie capitalism’, they are attuned to the scent of medieval in the creative commons, in the folkmote, and the plateau of middle in the unbundled territory of post-post-industrialism.

Neomedievalism embraces the spectral traces or ‘uncertain knowledges’ of its historical past as part of an ever-morphing, force-feedback simulation, (or permanent rehearsal) of coming events. The longing for a future assembled from a bricolage of pre-modern components embeds itself deeper with every advance in the technologies of representation. The fantasy must become ever closer to reality.

Now, this weekend, as part of the 2010 Edinburgh Art Festival Expo Commission, they are staging a Zombie Walk and reception, tonight, August 7th:

This involves a mash-up of Robert Burns' Tam O'Shanter, The Party (starring Peter Sellers) (1968), Night of the Living Dead (1985) and The Fall's Live at the Witch Trials (1979). A secret party is being held in the honour of Edinburgh's 'ghosts', the living dead who wear historical costume for their work.

At 11:00pm this Confraternity of Neoflagellants will assemble at the Scott Monument and walk through the City of Edinburgh, arriving at an undisclosed location before the midnight hour. Once there, they will cross the Styx to a wake. The after party will feature music and DJ sets as well as projections by artists currently exhibiting in 'Avalon' at The Embassy gallery in the Roxy Art House, Edinburgh.

On this coming Monday, August 9th, there will be a 1-day symposium on "Investigating Premodern Futures," and Bettina Bildhauer [Univ. of St Andrews] will be there, representing the BABEL Working Group and postmedieval, and presenting on the panel, "Return of the Long Now." You can see the whole program by following the link above. The main event of the day will be a featured talk by Howard Rheingold, the author of Smart Mobs (2002), among many many other publications.

I'll be sending a BABEL/postmedieval "post-card," via podcast, for the symposium, if I can get my act together later today or tomorrow. And here is hoping to a BABEL/postmedieval/Confraternity mash-up in the near future. Cheers to everyone in Edinburgh. Thank you for your playfulness, your provocations, your neomedievalisms, and your artistry!
Posted by Eileen Joy at 1:45 PM