Intensity and Sensation: Companionship in Barcelona 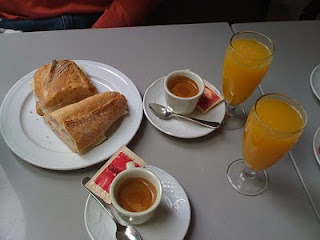 Sunday concluded a remarkable year of travel: not just the recent B-Tour, with its five stops in four weeks, not just a big family trip, but also Kalamazoo and NCS Siena and the York 1190 conference. Five international journeys within seven months sets a record for me, one I'm not likely ever to break. One of these voyages was vacation, so it probably doesn't count, but the other four involved the presentation of new work, three times as a keynote: on Jewish-Christian neighboring (York), on blogging (Siena), on stone as a desiring organism (Berlin), on monsters and the transhistorical desire to belong (Barcelona). Luckily I have exactly four functioning neurons inside my brain and was able to dedicate one to each task. I feel sorry, though, for the family, friends and students at whom for months I stared blankly, pretending to listen while composing sentences about Grendel's relation to a failed subway system in France in my head. I am now discovering that I have no idea what anyone has been doing for the past year, so please forgive me if I have forgotten that we had a conversation and that it was enjoyable, even life changing. I don't recall.

Barcelona was a good destination at which to end the peregrinations of 2010. Getting to the city wasn't as easy as it should have been: I changed planes at Charles de Gaulle, and the ongoing strikes ensured that a delay of many hours before the aircraft departed for Spain. That meant that I missed the first evening of the MACBA symposium, featuring two speakers I wanted to hear: Anne Sauvagnargues on Gilles Deleuze and Manuel Asensi on Jacques Derrida. Manuel's piece seemed especially important because I on the next day would be speaking about Derrida's fascination with the Chimaera and other composite creatures in The Animal That Therefore I Am. (Anne very kindly gave me a copy of her book on Deleuze and art; I'll plug it here because it's quite a good, brief introduction to key concepts in Deleuze via his writing on images).  I was sorry to have missed the opening panel, but then again it is likely that had I attended I would have been that annoying guy sitting in the back snoring.

Unlike most of the professional travel I do, this time I did not make the journey alone. Lowell Duckert, a graduate student here at GW (as well as my MEMSI assistant and a collaborator and a friend) came to Barcelona with me to attend the MACBA symposium. Since we missed most of the first night's talks, we took a walk to the Mediterranean and admired the fullness of the moon on the blackness of the water. The surge of sea of sea was calming, and we stayed a long while. Lowell took a swim. The beach was nearly deserted. The world seemed wide.

We returned to the hotel and slept. After eight hours within what I can only describe as a coma, we used the late morning and afternoon to conduct a Gaudi pilgrimage: Sagrada Familia and Park Guell. I'd visited both these spaces during my visit with my family to the city back in August, but felt a deep need to return: in the verve of their lithic undulations both have given me a profound sense of being on the right track as I work on my book on the life of stone.

Friday evening I delivered my paper, "The Promise of Monsters" (a punny title I admit). I learned the hard way in Berlin about how to be gracious to an audience that knows your native tongue, but doesn't necessarily easily follow its academic dialects. I gave what I hoped was a non-boring PowerPoint accompaniment to my talk which displayed important quotes, contained some striking images, and also contributed a quiet commentary upon my own text (though maybe too quiet: I had recurringly placed an image that my son painted of something ineffable, ruah or the breath that is creation, at moments when I was speaking of the Christian life of the Genesis myth; no one seemed to notice the repeated surfacing of the Hebrew). I talked rather than read from my paper, which focused on the desire of monsters (Grendel, the creature in Frankenstein, Aramis) for admission to the structures that dream and then exclude them, their ardency for companionship. Many in the audience didn't use the earphones that provided a Spanish translation of my words, but come the Q&A I had to rely on the device to understand what was being asked. The gap that opens when two speakers cannot communicate in a shared tongue was evident, but never insurmountable: we had a lively interchange that lasted what would be at an American conference late into the night. The speakers then went to dinner with the conference organizers at a small restaurant at which we ordered very little, yet plate after brimming plate arrived with foods to consume in common. Combined with wine that likewise seemed endless, you would have thought that at midnight we would be ready for bed. Barcelona doesn't sleep. We sat outside and drank beer and wondered that the world could contain so much vital motion.

The following day the symposium ended at 2 PM. One paper was pre-recorded, since the presenter couldn't get a visa in time. The second, by Lars Bang Larsen, concluded with a provocative piece that combined early electronic music and landscape art. We had beer at the nearby cafe and went our separate ways. Lowell and I had decided not to sleep that night, since we were departing for the airport at 4:30 AM. We spent the afternoon wandering the old part of the city, buying souvenirs and nibbling tapas. In the evening we listened to Manuel Gonzalez play guitar in an ancient church, a transcendent experience. We wandered to some more Gaudi architectures, we ate more tapas, we drank at a bar with a German name until it closed at three. The vivacity of Barcelona: even at this hour the avenues were crowded with people, groups of young and old simply strolling; revelers on their way home; men selling red cans of beer for a euro each. We sat on a bench, drank red cans of beer, and watched the parade. The boulevard had its drug dealers and prostitutes, but never felt unsafe: they were part of its life, not a danger or threat. I don't know what we talked about; I just know that we never ran short of words. The night's spectacle became the morning's. At 4 AM we returned to the hotel, showered, grabbed our bags and took a taxi to the airport.

Thinking back on the trip -- and thinking about the ample international travel I've done this year -- what strikes me vividly is how being out of place and out of time intensifies experience. A part of you knows that the sun is not in the right position and the clock is not declaring the accurate hour. And yet this eccentricity to one's usual orbit has a vitalizing effect. The senses seem more acute. Perception and sensation heighten when lived out of place. The best meal I had in Barcelona was a simple breakfast of deeply intense espresso, tart juice from a fresh orange, a sandwich made with crunchy bread, manchego cheese, and drizzled olive oil. The best lunch was not much different, purchased from the Mercat Boqueria and consumed on the porch of a church. Both were shared repasts.

I keep thinking of a line I had in my MACBA paper, about the relation of "companion" to cum panis, "the one with whom we share bread." To share these adventures intensified them further. Here at ITM I've written about my morning litany in Berlin, a solitary ritual that that has become a fond memory. I've talked about the part of me that is drawn toward solitude. But I also know that at this point in my life I am prone to becoming lonely or homesick when away. Moments of sensory intensity are exponentially deepened, I realize, when they are not private. I don't think I would have enjoyed my jaunt in Florence nearly so much without Stephanie's love of mozzarella and quiet streets, without David and his brother's savvy about sites and restaurants. Barcelona would not have been nearly so vibrant without Lowell's good company.

And let me add another companion to this group: you, the person reading these words here at ITM. Transforming sensation into language intensifies the event again. You give me the chance to discover once more the pleasure in companionship, even when I have never shared bread with you.
Posted by Jeffrey Cohen at 10:01 AM