I realize that while I've told you plenty about Jewish Berlin, travel through the city, and my own talk, I've not blogged about the conference itself. With 250 registrants and I don't know how many actual attendees, the event was a fantastic success, and the organizers are to be thanked heartily for having done such an excellent job with it. 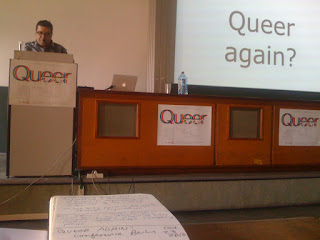 And much more. All in all the conference was breathtaking. My brain is still in recovery.
Posted by Jeffrey Cohen at 2:36 PM

I can only say . . . I wish I had been there. I would have liked to have heard Halberstam's full talk, and also Ferguson's. I think the masculinist ethos of much queer theory is not discussed enough [the subject is a tricky one, of course, and highly contentious, and yet one can't deny that so much of what might be called queer theory's foundational texts--by Sedgwick, Bersani, Edelman, Halperin, and others--has been driven by tropes borrowed from what are *seen* to be conventional male homosexual life-practices; Judith Butler's early work may be one of the major exceptions to this rule].

Ferguson's argument about the university absorbing [and thereby, I imagine, erasing] difference reminds me of the same argument Naomi Klein made in her book "No Logo" about the ways in which corporate America took up the identity politics of the 1970s and turned them into marketing techniques, thereby also subsuming the questions & politics surrounding difference into the always shifting and mobile signifiers of commerce that flatten everything into, um, *stuff* and desires for stuff [which masks all of the problems that never get solved, only aggravated, by consumerism and the unfettered movements of trans-national capital]. But Klein had a larger point that I think is important to consider and debate within queer studies as well--which is that identity politics lend themselves, perhaps too easily, to this kind of co-option. When different groups get the supposed "equality" or attention or regard they are looking for, in certain small-ish increments, they sometimes forget the larger [and more global-historical] struggles that implicate larger aggregates of persons, which might include all sorts of different smaller identity groups which sometimes see themselves in opposition to each other.

For reasons I won't go into here, but that involve a disturbing incident I had last week with someone who tried to convince me that there is no such thing as a "moderate Muslim," I've been thinking a lot this past week about the ways in which "difference" is something special in need of protection but which also stands in the way of what might be called something like the possibility of understanding, tolerance, and peace. We want to both appreciate, and maybe even love, and protect, the radical alterity of everyone and everything, but the more we all settle into these differences as "shelters" or as lines that can't be crossed except in particular ways, then you have, like, war . . . to be blunt about it. I think that's why my favorite theorists in queer studies are, in the end, the later Sedgwick [especially for her ideas re: reparative reading and queer little gods], and the later Bersani for his ideas re: radical sameness and the necessity of overcoming one's supposed precious singularity in order to move less violently in the world, between and among other persons/things. It all seems to go back to Freud and "The Vicissitudes of the Id"--in order to individuate, you craft an "I" that is, in some important sense, *against* the world; the world becomes the enemy, everyone is a potential enemy. In order to do that, you need a notion of difference, of separation, and an individuality that has to be prized above everything & everyone else.

I would like to see a more nuanced version of "singularity" that would somehow move beyond the kinds of identity politics that are either satisfied too soon or that become violent through a kind of narcissistic extravagance [my world, at any cost, even if it means genocide, terrorism, etc.]. I think Michael Snediker's book "Queer Optimism" moves in this direction, as does some of Judith Butler's more recent work. I think Munoz's work is important for re-opening the question of utopia via alternative, avant-garde aesthetic practices, and anyone working on the "re-wiring" of the dark energies of violent pasts for more optimistic futural gains [i.e., Beth Freeman, but also Munoz] is tracking in the right direction. I also think the work of political theorists like Jane Bennett and Erin Manning ["The Politics of Touch"] and William Connelly ["Neuropolitics" and "A World of Becoming"], etc. should be taken up by queer studies and vice versa [for the purposes of working out new strategies of pluralism].

It seems to me that the critical question, in light of this conference's theme of queer studies in relation to power, politics, and ethics, will have something to do with how to craft a politics, or an ethics [or both] that both prizes queer singularities while never letting them harden into rigid domains of privilege and "territory"--this is a supreme difficulty. Everyone is the same; everyone is not the same. Both are true, but the former needs to matter more than the latter. That's just my opinion. That's why I like radical cosmpolitanism as a politics, but that's a whole other story.