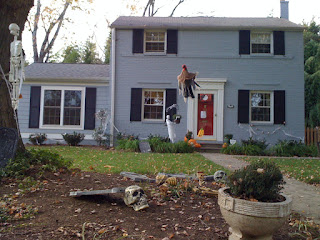 Warm fire on a cold night, and we are all in pajamas watching Castle in the Sky.

As you'd expect from someone whose research has long examined the cultural function of monsters, Halloween is a favorite holiday. A day of carnival without any necessary anchoring in thoughts of death, Halloween is second only to Christmas in American popularity. Yet the day's obsession with gravestones, physical revenants, and spirits that return from beyond the horizon of our own mortality appeals to anyone with a morbid streak. And that has been, from a tender age, me. Did I ever tell you that I made my first cape at the age of six, bought my first skull candle at eight, and listened to the Smiths when I went to college? Yes it all fits. I may even have owned a black mock turtleneck or two at some point.

Each year we decorate our home for the holiday. A neighborhood block party began spontaneously six or seven years ago right out front, and has increased in size each October 31 since. These festivities add pressure to up our annual decorating ante. This year Alex and Katherine were in charge. You can see from the photo that they've done a superlative job. This time around, though, Alex will not wear a costume and seek candy. He has volunteered to chaperone his sister, and hopes that as a responsible big brother sweets will be tossed his way.

Over time Halloween's death symbols have weighed more heavily on me. I suppose I feel my mortality more, not simply because I'm getting older, but since there is so much in this life that I would like to keep. I feel it already slipping away. Barcelona reminded me to seek moments of intensity wherever they are to be found, but the predictability of everyday routine makes that quest difficult. It's easier simply to go on. This week I've made pan con tomate and purchased manchego cheese and brought out the stove top espresso maker we brought back from Paris, but the coffee was a little bitter and the bread a little soft. And of course Alex is not wearing a costume this year. He doesn't need his parents as much as he once did, and now works hard to create separation. Katherine meanwhile has become a force of nature, a strong little person with an extraordinary sense of self. I want to keep them close but I know they are already embarked on their own expeditions, ones that will carry them in time far from our Haloween-decorated house. Independence is good. But the world is dangerous, and I want to hold them close all the same.

A neighbor was just diagnosed with cancer. She's young, she has two children, a son in Katherine's class. She is already undergoing intensive treatment and it is difficult to say what the outcome will be. That sudden swerve from a good life that seems like it will continue indefinitely to one in which a few months from now have become uncertain is frightening. Halloween, with its plastic gravestones and fake skulls and glow in the dark skeletons, is weirdly joyful, a happiness limned with death. Even though we paid $2.99 for the decapitated clown head on a string that now dangles from our tree, it is hard not to see in it a real memento mori. The plastic graveyard we've set up on the lawn is a place to consume candy, is the world we've always lived with, is the life we lead in the certainty of loss.
Posted by Jeffrey Cohen at 5:19 PM

First of, um, two. Yes only two. No I didn't wear a cape last night, why would you think I had?

OK, I did. But I looked dashing in it.