No doubt the York Police were trained at SUNY-Albany 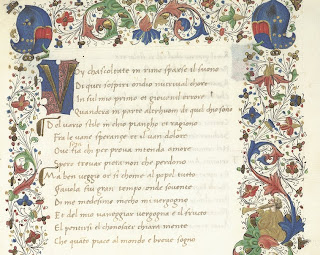 Particularly few Italian merchants were found inland [in fourteenth-century England]. The old familiarity with Italians inland was disappearing, as suspicion of aliens due to the Hundred Years War was growing. In Salisbury in 1379 Mark Lumbard of Venice was arrested as a spy and had to be bailed out by four London Italians, Peter Mark of Florence, Bartholomew Bosan of Lucca, Nicholas of Venice, and Peter Bragadyn of Venice; and earlier in 1360 two Italians found wandering in York had been imprisoned because no one 'understood their idiom.'

Wendy Childs, "Anglo-Italian Contacts in the Fourteenth Century," 67, in Piero Boitani, Chaucer and the Italian Trecento (Cambridge UP, 1983), citing the Calendar of Close Rolls, 1354-60, p. 608 [by the way, I have no access to this subscription-only service. If you do, please could you do me a favor and leave the appropriate entry in the comments?]

You've already heard what's happening to the classics, French, Italian, Russian, and theater programs SUNY-Albany? If not (from Inside Higher Ed):

The State University of New York at Albany's motto is "the world within reach." But language faculty members are questioning the university's commitment to such a vision after being told Friday that the university was ending all admissions to programs in French, Italian, Russian and classics, leaving only Spanish left in the language department once current students graduate. The theater department is also being eliminated.

For further context, see the New APPS blog: Art, Politics, Philosophy, Science, here and here, where you will learn that SUNY Albany passed its re-accreditation just before announcing these cuts. How conveniently timed! Also, you'll read this observation by a SUNY Albany professor: "UAlbany is going to be a laughingstock. The President set the tone for this at the recent meeting when he announced this decision. For a couple of years, the school's motto has been 'The World Within Reach.' When it was pointed out to him that he was consigning us to reaching only the English-speaking world, he told us that what the slogan *actually* meant was that the 'world of opportunity was within reach.' The double-speak has begun."

Meanwhile, coincidentally, SUNY Executives seem to be doing rather well for themselves.

Here's the necessary contact information for protesting, also from the New APPS blog:

(detail from Austin, University of Texas at Austin, Harry Ransom Humanities Research Center, HRC 047, f. 1; for a modern edition of the poem, also unreadable in the wild center of my state, see here)
Posted by Karl Steel at 8:57 AM

I have no access to this subscription-only service. If you do, please could you do me a favor and leave the appropriate entry in the comments?

I have such access, but there are no page numbers in the digital version and nothing in the range that includes p. 608 obviously matches your cite. Do you by any chance have the date of the record?

Footnote 10 here is my reference. How annoying. Thanks for checking though!

Yes, Latin - who needs it? I can imagine the President, who does not hold a Ph.D., saying this to himself. We need "practical" things, so we keep only Spanish (which is needed in a business context) and junk the rest. Pathetic.

Anonymous said...
This comment has been removed by the author.
5:20 PM

Doctor Cleveland has a thoughtful post on all this: http://doctorcleveland.blogspot.com/2010/10/21st-century-education-suny-albany.html

Well, clearly the citation is in error, which is why ALL scholars--me included--should be careful about citing a cite of a primary source. I'm assuming that the citation isn't invented, but at some point, the page number ended up incorrect. Annoying.

And thanks Martin! I was just about to link to that. Summary of that: it's EXPENSIVE to teach foreign languages and drama because they can't be taught well as big lectures. It's outrageous!

And the idea that French isn't PRACTICAL! In Albany, so close to Quebec? And do we not expect Africa to increasingly be a market in the next 50 years? Is any language so useful in Africa as a whole as French, barring English of course? And what of Portuguese?

To the mayor and bailiffs of York. Order to dearrest John Restor of Milan and Guidolus de Kancio, two foreigners, without delay, and to restore to them one seal and two rings taken from them, permitting them to go whither they will, as Richard Spynes coming to the council at Westminster has related on behalf of the mayor and bailiffs how John and Guidolus were found wandering in that city for three days and more, and because they were unknown and no one understood their idiom, the mayor and bailiffs arrested them and sent one of them with Richard to the council, asking what they ought to do with them, and it has been testified before the king by citizens of London and by several merchants, native and alien, that John and Guido are lawful merchants of Lombardy and have come to England for the purpose of trading and no other. By the guardian and C.

!! You, sir, are a gentleman of the highest order. THANK YOU.

I'm really not! Gentlemen don't get to have any fun. But I'm happy to have been able to help, sorry it took me two goes.

Given that school districts across New York State are shedding foreign language programs like a black cat on a white sofa, the dropping of Foreign Language programs at SUNY schools doesn't come as a big surprise.

However it is indefensible.

The loss of foreign language programs and fine arts programs anywhere in secondary & post-secondary education is a tragic one. I live in New York State (near Rochester). As the SUNY system trains most of teachers in NYS, this decision by SUNY will deeply harm the general education in our State for years to come.

UAlbany has sadly only gotten worse since this post.