Animals, Saints, and Monsters in the Middle Ages: Spring 2011 Version 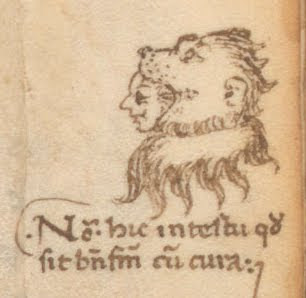 by KARL STEEL
Brooklyn College starts its Spring semester in two weeks. For those of you already teaching, you have my sympathy, which I expect will be returned to me (with interest?) in the last week of May, when my Spring will have done with me. Today's task? Retool my graduate "Animals, Saints, and Monsters" course. Last year's version is here.
In the spirit of sharing Spring courses (see Jeffrey, here, and Eileen, here, especially if you want to see who I'm ripping off):
This time around, in response to student complaints that I was teaching too many things, I'm dropping, among other texts, Yvain and Guillaume de Palerne, the first because I'd rather spend half a semester on it, and the second because of its price and because so much of it tends to all-too-familiar medieval battle scenes, perhaps interesting to my students but dull, dull, dull to me. I also dropped Geoffrey of Monmouth's Vita Merlini, because I very much want to teach it with Timothy Morton's The Ecological Thought, and because I don't feel comfortable assigning my students a $40 hardcover that runs less than 200 pages. I'll teach the Vita again when Morton comes out in paperback.
In response to student requests for, I kid you not, more werewolves, I'm providing just that (thank you, Liverpool Online Series: Critical Editions of French Texts). I'm keeping the Melusine legend from Geoffrey of Auxerre, adding in Chaucer and Marie de France (because, well, I just should teach canonical texts from time to time) and, as well, Raymon Llull's fables because they're good...and because I don't think my students want to finish their semester by fighting through Henryson's Middle Scots, despite Henryson's highly peculiar sympathy for the violence he has his fable figures suffer (for a tantalizing discussion of this, see Jill Mann, From Aesop to Reynard); see lines 1874-1880.
The schedule follows:
(image, f 28r, from here, Robbins MS 005)
Posted by Karl Steel at 2:57 PM

All of the syllabi you guys keep posting here are making me long to return to teaching -- another reason I can't wait to be done with this dissertation!

I'll be interested to hear how the werewolves segment goes -- in one of the many syllabi I've had to create for the job market and post-doc applications, I put together a similar segment geared toward undergrads -- less theory-oriented for the obvious reasons, but including Bisclavret, Biclaret and Melion.

was that an aspirational syllabus? if not, how'd you teach Biclaret and Melion? I've never read them, but the free pdf, top-notch edition is too good to pass up.