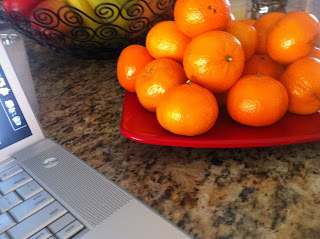 This semester I teach on Mondays, Tuesdays and Wednesdays. Fridays have frequently been populated with MEMSI or other events, and Thursdays seem to be traditional for scheduling administrative meetings. Today is my first work at home day in quite some while, and although I've caught a cold that so far has required the rapid exhaustion of two boxes of kleenex, it's good to have a day to myself.

I've been working on my keynote for a small conference being mounted by the doctoral program in French at CUNY next week, rethinking some work I've presented in the past on Derrida, the animal, chimerae, and monsters. The talk now boasts a werewolf section, thanks to this post. I'm pleased that I've been able to compose these class summaries, since they are turning out to be handy for all kinds of new projects. The last one was especially difficult to write (and the class difficult to teach), mainly because when it comes to Deleuze and Guattari ... well I've been working their texts for so long that I'm not great at introducing them any more. I'm best at teaching what I know least well.

So today I tinker with my NYC talk and its PowerPoint, grade some Chaucer midterms, read two essays for a seminar tomorrow, sniffle into some more kleenex, and continue to eat clementines at a rate that makes me wonder at what point I'll be orange. It's also been a good day to think more capaciously about the future. A brief phone chat with Eileen spurred a book idea that, should we collaborate, could either be the best thing ever to happen to medieval studies or the end of our violence-plagued friendship. I was going to have a conversation with someone tomorrow who has of late let me down, but with some perspective that has become less important, and (paradoxically) easier. I've still got more on my proverbial plate than I can handle, but today at least it does not seem so overwhelming. May this unremarkable, illness-bearing, citrus filled Thursday never end.
Posted by Jeffrey Cohen at 12:29 PM

Our "violence-plagued friendship"? Do tell, "friend"! As for myself, I wish only that there were *more* violence! I hardly get enough, at your hands, as is. Oh dear, is this one of those ill-advised late-night wine-soaked online messages? Perhaps so. Onward and upward with the arts.

Or at least, not until next week.

Mr. Sparkles is recovering, by the way, but his splint does not come off until next week. He's requested a mediator.