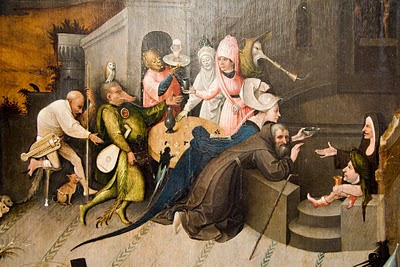 I am extremely excited to announce that Graham Harman and Edinburgh University Press have recently announced the launching of a new book series in Speculative Realism, of which Harman is the Series Editor. Speculative Realism [and its associated and occasionally opposed terms, speculative materialism, object-oriented ontology, onticology, eliminative materialism and even eliminative culinarism, new metaphysics, speculative heresy, dark ecology and even nihilistic speculative realist philosophy of nature, vibrant materialism, etc.] is not so much a defined school of thought as it is a rowdy and vibrant crowd of what Harman has called "intellectual gamblers" who are re-shaping, in important ways, 21st-century philosophy.

For a while now, some of us in medieval studies have become interested in this turn to the speculative in continental philosophy, as witnessed by, for example, BABEL + The Petropunk Collective's launching of its own Speculative Medievalisms project, and while much of the so-called SR/OOO movement has its roots in philosophy departments [and on the fringes of philosophy as a discipline], many of its most gifted interlocuters can be found in other disciplines, such as Literature, History, Economics, Cultural Studies, New Media and Communication studies, Science Studies, Religion Studies, Ecology Studies, Theory-Fiction, and the like. But saying that a new movement cuts across fields and disciplines isn't as radical, in my mind, as saying that it cuts broadly across temporalities, especially those designated as the "premodern," and therefore, I'm especially thrilled that Harman has decided this new book series should cull work not only from different fields [and cross-fields] but also from a broad range of temporal periods, and therefore, he has asked a medievalist, ME, to join him on the editorial board.

And so I say to you--yes, YOU--that if you are a medievalist or early modernist or classicist or anything that supposedly operates on this side of the so-called "Enlightenment" divide, and if you have any interest in the recent speculative turn in relation to literary-historical and material cultural (including "media") subjects ranging from antiquity to the 1600s, then: we would love to see your book proposal.

For more information, go HERE to Graham Harman's website to read his more full description of the book series. But keep in mind, too, that Speculative Realism is a "big-tent" movement, and by exploring the links in the first paragraph above, you will see that it has many, many fruitful avenues of exploration and thought. Note, too, that the books will be affordable.
Posted by Eileen Joy at 11:26 AM

Hi Eileen, great news, I just posted on it.

Very generous of you, Timothy, and thanks!