Considering I'm not a cat person ... 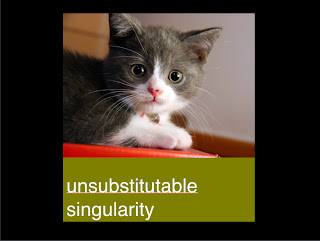 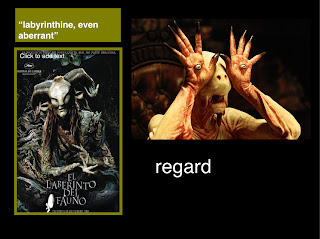 ... it may surprise you that the image at left is included in the PowerPoint that will accompany my talk at the CUNY graduate program in French conference Collective Identities: Policies and Poetics next Friday.

This kitten, so cute it is disturbing, is supposed to be Derrida's pet, the one that peers at him naked and triggers a philosophical crisis. It's not really Derrida's cat, of course: a pet which, despite its "unsubstitutable singularity," is never named in the text. (My best guesses are "Hegel," "Pharmakon," or "Mr. Whiskers.")

Of course, the talk is about "The Monster that Therefore I Am," so it also includes this slightly less savory image. But you know, I'm thinking that this second slide is the less creepy one.
Posted by Jeffrey Cohen at 7:22 AM

I do believe you're right. It's the un-fathomable all-kowing stare of cuteness that gets into your soul......

May I suggest this for a slide?

The cat is dead; long live the cat!

You may ALSO want to play this MIAO song for your talk!

Here it is with English subtitles.

This kitten, so cute it is disturbing = disturbing because we are not supposed to find meaning in the expressions of non-human animals? (Read my book The CAt Who Thought Too Much so u will not find it disturbing . . .

I like "unsubstitutable singularity," but think the more important gap is not between Derida's cat and the kitten photo but between the kitten mentioned by Alice and all cats (and from that all animals mentioned by Descartes!). Derrida seems to have no sense for category: odd for a philosopher! Alice was far more observent of animal behavior than our French generalist!