there are powerlines in our bloodlines 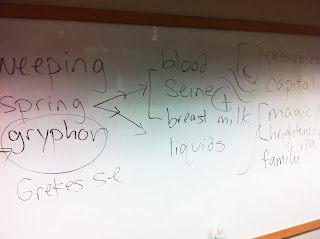 "dynamical elements we have in common with rocks"
For once not snow or slush but simple rain. The world is drenched, and I am walking to metro all the same, trying to prevent the pathetic fallacy from truth.

I feel withdrawn: an energizing class last night, in which we spoke of a favorite romance (Octavian), and two favorite authors (Manuel De Landa, Steve Mentz). But today is a Chaucer class that will not cohere, business I don't want to conduct, too much to accomplish, a melancholy, a blog post I don't have the desire to compose.

"a sharp tang of nonhuman immensity"
Octavian opens with the promise of fire: a dream of a burning dragon, a miscarriage of justice that consigns a new mother and her twin progeny to flames. Octavian quickly becomes, however, a romance of flows: saturated with brine (the transportive waves of the "Grekes se," the body of water across which the characters are perpetually conveyed by ships or gryphons; the flood from every human eye in this text of endless tears); soaked by a fresh water spring that offers respite for lions and gryphons, death to thirsty sailors, reunion for sundered families; drenched with blood that soaks the bed of marriage and childbirth as well as the battle field; alive with the breast milk from a lioness who feeds a royal child when she loses her own whelps, or from a nameless nurse secured in Jerusalem when a bourgeois merchant purchases a baby there for reasons never explained; swept by the curve of the Seine, a river that only seems to separate Christians from Saracens, while blurring the difference between sandy Jerusalem and drenched Paris; saturated by the passions that course through animal, human, and perhaps inorganic bodies; soused by a circulation of capital, merchandise, florins, pounds.

Manuel De Landa, poet-philosopher of matter on the move, writes that


reality is a single matter-energy undergoing phase transitions of various kinds ... Rocks and winds, germs and words, are all different manifestations of this same dynamic material reality ... Our organic bodies are, in this sense, nothing but temporary coagulations in these flows: we capture in our bodies a certain portion of the flow at birth, then release it again when we die and microorganisms transform us into a new batch of raw materials (A Thousand Years of Nonlinear History 21, 104).

Steve Mentz finds a similarly nonanthropocentric, nonanthropomorphic and liquid restlessness in the ocean. This inhospitable and unfathomable vastness is not a metaphor (even if we cannot resist aestheticizing its surge), but a materiality that disorders, transforms, remakes the human (At the Bottom of Shakespeare's Ocean). Sopping wet Octavian seems the medieval version of these philosophies of flow: the text that sometimes stops moving (young Florent in the marketplace is enraptured by his sight of a falcon and then a steed, animals that transport him out of his middle class identity into the timelessness of chivalric belonging), and yet even these moments of arrest are components of a larger movement, towards the reunion of the broken imperial family with which the narrative began. The story ends when the Emperor is reunited with the wife he wrongly banished, with the two sons who have grown to adulthood far from Rome.

And yet, the ending of the tale is unsatisfying. The characters with whom we are intimate have been bound in iron, rendered immobile, and a person we barely know (Octavian Jr., of whom the story has told us very little) saves the day, miles ex machina. The conclusion has the family return to Rome together ... but to what future? With what promise? The book does not say.

We have followed in my Objects seminar the peregrinations of the angels, messengers, intermediaries, translators (call them what you will) who enable the networks and connections through which change and agency are possible. Octavian features many bearers of tythandes (the maidens who inform the Emperor of the birth of his twins; Olyve, the attendant to the Saracen princess Marsabele), many conveyors of bodies from one place to another who have stories not fully told (the lioness, gryphon, ape, outlaws and horses that carry the abducted brothers at one point or another). None of these go-betweens, however, are as memorably rendered as Clement, the Parisian merchant who on pilgrimage to Jerusalem purchases a baby, christens him with the name of his favorite coin (Florent), presents him to his wife as his own (we imagined that the unnamed wife might also have been given a T-shirt that reads "My husband went on pilgrimage to the Holy Land and all I got was an illegitimately begotten baby.") Clement is, on the one hand, a stock character. An inveterate haggler, he is fond of declaring that everything is merchandise; he doesn't comprehend the aristocratic world, so that when Florent is honored at a royal feast he fears he will have pay for the food and takes everyone's cloak as surety. No wonder his adopted son is said to be ashamed of him.

Florent's "progress" is to come to realize the noble identity he has always inhabited. Florent at seven and twelve and as an adolescent is always the same person: he does not change, despite Clement's abortive attempts to teach him a trade and instruct him in the navigation of an ordinary life. Florent's destiny is to depart for Rome. He leaves Paris without a word to the "father" who has been profoundly changed by the love he bears for the son not his. Clement learns from his mistakes. He beats the child Florent for purchasing a falcon, but comes to realize why the bird is regal; he is patient when a steed joins the bird; when Florent determines to fight the Saracen giant that has been threatening Paris, Clement surprises us by bringing armor out of his closet, rusty but usable; when Clement learns that without stealing the Sultan's unicorn-like horse the pagan army will triumph, he infiltrates the enemy camp by speaking their tongue and abducts the animal. Knowing all this, and knowing as well that without Clement's words of encouragement Florent would have died in battle against the giant (1029), the following scene becomes unbearable:
Clement attempts to remove the rusty sword from its scabbard. He and his wife fly backwards as it emerges, and Clement bangs his face into a bench, cutting open his mouth and his nose, drenching his face with blood. And Florente stode and loghe. What's so funny about having the man who has raised you hurt himself so badly that he loses consciousness? The answer is obvious: we are supposed to adopt an aristocratic point of view here, and see the ridiculousness of a bourgeois merchant attempting chivalric action. This is medieval physical comedy from a noble perspective, and we're not supposed to feel anything for mercantile Clement. He is the man of business whose small life Florent must transcend. We are being too modern if we feel some sympathy for a droll figure who beats minstrels at a banquet because he's afraid he'll have to pay their wages if they stay.

And yet the narrative doesn't allow us such an easy way out. Just before Clement tumbles to the ground and gashes his face, we witness a poignant scene of him removing the ancient armor from storage and placing it upon the boy he has raised since infancy. As he helps Florent into a padded jacket and sees how "bold and keen" the young man has become, "For sorowe Clement herte nere braste" ("For sorrow Clement's heart nearly broke," 935). This moment of paternal pride and worry, this moment that has to be called love, is wholly extraneous to the unfolding action. Why should we care at all what this intermediary, this soon to be surpassed helper, should feel as he dresses this son of an emperor for battle?

How can we not identify with Clement when he wraps Florent in armor that he himself once wore, a son who will soon admit to his biological father that he feels no attachment to the merchant? Clement, despite his love of florins, attempts to pass along not just possessions but a mode of not holding too tightly that which is yours. How can we not wonder if the romance comes to so unsatisfactory an ending because this irascible angel at its heart has been left in ordinary Paris when everyone else departs for eternal Rome?
Posted by Jeffrey Cohen at 9:19 AM

Many thanks for this wonderfully thought-provoking and haunting post. I´m also grateful for the reference to Steve Mentz´s book (which I´ve just ordered on amazon).

Have you done anything with Clement's name? Clemens, merciful, loving, compassionate. His self-deceptive belief that he loves money especially, evident in the name he gives Florent, is belied by his own name, which exceeds all rational circulation.

We talked a little about his surprising name -- and about the fact that we meet him as he returning from a pilgrimage to Jerusalem, not a business transaction of any sort. The fact that he possesses armor may also mean that he was a crusader as well; who knows. But no matter: he is a complicated character, and not reducible to the stereotype he embraces. You put it very well when you write of his "self-deceptive belief that he loves money"!