of angels and angles 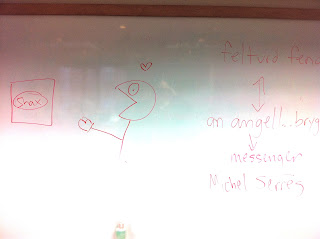 neither nature nor society
The street that leads to Friendship Heights deadends into the road along which the Cohens dwell, and most days I follow that path directly to the Metro. When winter mornings begin their yield to spring, though, I alter my route. I cut out of my neighborhood and across a nearly hidden swathe. Since the late 1800s this hilly triangle has been a meadow, a farm, a sweep of streetcar tracks, and a modest urban park. Little Falls stream edges the expanse. Although its waters are at times iridescent with the oil that washes in from nearby streets, and although the stores and high rise apartment buildings just uphill were built without thought of storm water drainage, ensuring that any vegetal life is scoured during summer's downpours, mallards still congregate along its rocks, and small fish dart its waters. Some time before I moved here an asphalt path was paved where streetcar tracks had been, and a pedestrian bridge was built across the stream. Slides and swings were installed in an open expanse, and outdoor exercise equipment fitted into odd nooks. The children's playground was removed last year, too dangerous because not maintained: a small field now stands there. The exercise equipment, constructed of wood and metal, is being absorbed into the woods as kudzu and porcelain berry vines engulf their broken pieces. Some of the trees in this pocket of forest have fallen during recent storms, but the oak canopy still reaches to perhaps sixty or seventy feet, a dense network of branch even in winter. Decades ago someone planted bamboo along the stream's edge, and now a stand that reaches well into the trees and spreads each year to colonize more of the park thrives here. The softest winds rustle their leaves.

I begin with this urban wild because of its layered social-natural history. To walk through the lonely park is to realize how quickly the Washington landscape has changed. Sixty years ago streetcars ran along the stream, carrying residents from nearby homes to Georgetown; now you can see one or two of those houses, but most were smashed in the 1970s to build apartments higher than anything to be found in downtown DC. Land farmed by slaves in the 1800s has lost most of its agricultural imprint, even if a cottage and the plantation house can be seen not far from where I live. The trees that sprouted when the streetcar track was abandoned have matured into a tall, sheltered woods where you can forget that you are surrounded by buses, cars, and pedestrians who walk alongside the busy roads rather than through this neglected park. The oaks have been joined by vines imported from England and Japan that have flourished in the mid-Atlantic, as well as by Asian bamboo. It's a constantly changing ecosystem in which can be glimpsed development without thought to environment; ephemeral movements to create lived "natural" spaces near colossal "social" ones; environment without thought of development; failed transportation projects; the intertwining of plant, animal, inorganic matter in the perpetual emergence of planned and unplanned lived spaces. You can't pass through this hybrid expanse without thinking about the desires of ducks, squirrels, storm water, oaks, invasive vines, birds, stones, bicycles, children, joggers, dogs, engineers, urban planners, developers, leaves, seeds, clouds, dwellings, streams, fish, hands, eyes, beauty, artists and berries: an enchained flow of strong and weak forces, of composite wills and conflicting movements that together form a network.

angles
In Reassembling the Social Bruno Latour writes that within actor-network theory (ANT), a mode of inquiry in which traces the associations through which agency emerges, action is dislocated: "borrowed, distributed, suggested, influenced, dominated, betrayed, translated" (46). As for an urban wild, so for a failed subway system, or microbes, or a science experiment, or a rain forest. Last night in my Objects seminar we thought about what such a methodology might yield for we who are textual critics, and found at the heart of this French sociologist of science an artist. Reassembling the Social reads like a how-to manual, but like everything Latour writes is full of literary reference (Frankenstein, Rimbaud, the Bible, Hamlet -- to name just a few from this book). Latour describes texts as laboratories (139): they deploy actors and networks, they do not critique them. Texts, like the best classrooms, are experimental spaces; they do not explain so much as enact. They make objectivity difficult; they do not simplify the world.

Thus Latour takes risks in his writing: the middle of Reassembling the Social contains an imagined dialogue called "On the Difficulty of Being an ANT," a sort of play-within-the textbook. Aramis, or the Love of Technology contains a beautiful sequence in which a personal transport system intended for Paris is abandoned by its engineers ... and Aramis (as the system was christened) begins to speak, accusing its imaginers of insufficient love. Aramis uses the words of Frankentein's Creature to make its accusations, and culminates its complaint with "Burdened with my prostheses, hated, abandoned, innocent, accused, a filthy beast, a thing full of men, men full of things, I lie before you. Eloï, eloï, Lama, lama sabachthani" (158). Not exactly subtle, and that is what I love about Latour.

pantope and utope
We began the evening with this, and wondered if in its heavy-handed ecological allegory we might find some excess, some message that heralded not cataclysm so much as a way of thinking beyond anthropocentrism. We tried to use "Sir Gowther" and some lais of Marie de France (especially "Milun," with its starved cygne/signe) to trace our networks. I invoked Michel Serres and his angels, angeloi, messengers as well as mediators, Pia and Pantope. The laboratory of our classroom wasn't quite strong enough: we couldn't bring into being the connections we needed to trace. We dismissed early, not under the best circumstances, but with an understanding that only strong communal will can bring into being the experimental space we need to make our seminar succeed: we're in it together, or our urban wild dissolves.

We, the little ants, should not settle for heaven or hell, as there are plenty of things on this earth to munch our way through (Reassembling the Social 140).
Posted by Jeffrey Cohen at 9:33 AM

I've been wondering about a variant of this a lot lately.

To what extent do angels represent something other than anthropocentrism for the Medieval, and to what extent are they, in fact, a point of comparative anthropology _avant le lettre_? Part of me wants to see in angelic discourse the hierophanac and supersaturated disembodiment of unperturbable forms; the other sees angels as the thought-chimpanzees of late scholastic philosophers.

And then a third part (the part that studied physics for four years and still falls dangerously into naturalizing comparatives) sees them as quantum particles, or perhaps dimensions in m-theory.

T, I like that idea. A lot. Please let me know what you're thinking as it develops/

Anthony Paul Smith's talk from the Speculative medievalisms workshop in London this January is available as an audio file here: