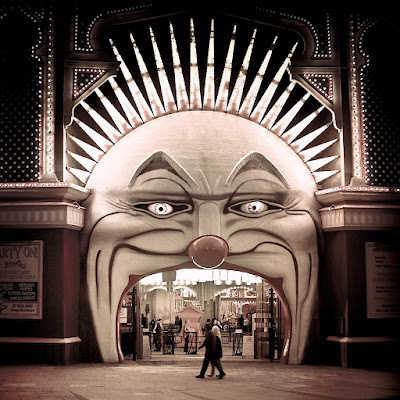 Don't worry about the world coming to an end today; it's already tomorrow in Australia.
--Charles Schulz
This coming Sunday, just after Thanksgiving, I'll be heading to Australia [first to Melbourne, and then to Perth], and while I'm a little nervous about the long flight, I'm terribly excited over the opportunity to visit this beautiful continent which heretofore has only existed in my imagination of it, inspired by books like Bruce Chatwin's Songlines, movies like My Brilliant Career, and the stories of one of my best friends who grew up on Kangaroo Island and in Adelaide (in south Australia). It will also be nice to depart for a place where summer is just beginning at the very moment the American midwest slips into its winter chill.

I'll be attending and giving a talk in Perth at a 2-day conference (Dec. 4-5) on "International Medievalism and Popular Culture," sponsored by the Australian Research Council (as part of a funded multi-year project on medievalism and cultural memory, directed by Stephanie Trigg, John Ganim, Louise D'Arcens, and Andrew Lynch) and the Centre for Medieval and Early Modern Studies at the University of Western Australia, along with other medievalists who will be in attendance, such as Louise D'Arcens, Helen Dell, John Ganim, Stephen Knight, Clare Monagle, and Stephanie Trigg, among others. I'm very excited about this conference, and also about the time I will get to spend in Melbourne for about a week before this conference starts, thanks to the gracious hospitality of Stephanie Trigg, who has also asked me to give a talk at the University of Melbourne.

So, as I am packing things like valium, noise-canceling headphones, melatonin, and kimonos (kidding about the kimonos), let me wish everyone a Happy Thanksgiving or whatever kind of holiday you might be celebrating if you have any part of this coming week off, and I'll share with you as well (below) the abstracts for my two upcoming talks. They both feature Lars von Trier, but in very different ways (hmmm . . . how did that happen?):

it would be hard to say exactly what I felt: vibrations in the archive

It would be hard to say exactly what I felt when I read these fragments and many others that were similar. No doubt, one of these impressions that are called “physical,” as if there could be any other kind. I admit that these “short stories,” suddenly emerging from two and a half centuries of silence, stirred more fibers within me than what is ordinarily called “literature,” without my being able to say even now if I was more moved by the beauty of that Classical style, draped in a few sentences around characters that were plainly wretched, or by the excesses, the blend of dark stubbornness and rascality, of these lives whose disarray and relentless energy one senses beneath the stone-smooth words.

The aim of this talk will be to share how, over the past two years, I have tried to take seriously Foucault’s question, repeated by the medievalist Carolyn Dinshaw in her essay, ‘Temporalities,’[2] of how the ‘vibrations’ of the dead Others felt in the archives might not ‘enter into the orders of reason at all,’ and how then, are we to analyze these ‘feelings, these experiences’? Is this a spiritual experience (Dinshaw herself hints that it is, in another essay, ‘Are We Having Fun Yet?’),[3] and therefore beyond rational analysis? Or could it be analyzed hermeneutically, and also phenomenologically?[4] It has been my hope for some time now that certain new trajectories of thought -- Claude Romano’s ‘evential’ hermeneutics as well as Graham Harman’s object-oriented ontology (especially his theory of ‘vicarious causation’) -- might point us in certain fruitful directions with respect to this question, and with respect as well to how we might begin to investigate new modes of reading (beyond, but also in combination with, the modes of reading most prevalent in the humanities at present: new historicist, psychoanalytic/symptomatic, and skeptical) that would pay better attention to the unruly ‘aliveness’ of texts. Related to all of this, and also raised most urgently in the oeuvre of Dinshaw, is the question of whether or not it is possible to ‘touch’ and be ‘touched’ by the figures and objects of the past -- for me, the question becomes: how can we reckon the ‘weird realism’ of textual figures and objects that refuse to cede completely to the grasp, or touch, of any hermeneutics we might apply to them, and yet, are still available for ‘relations’ (but what kind)? Through a reading of Chaucer’s ‘Clerk’s Tale’ alongside Lars von Trier’s film Breaking the Waves, I experiment with some of the ways we might get closer to this ‘weird realism.’

[4] It might also be an experience of embodied cognition related to the collision of cognitive objects (texts and readers), but I leave that route of investigation to those more interested than I am in cognitive literary studies.

An Improbable Manner of Being: Medieval Hagiography, Queer Studies, and Lars von Trier’s Breaking the Waves

In a planned fourth volume to his multi-volume History of Sexuality, never finished, Foucault planned to take up the ways in which early Christian confessional modes intensified certain classical models of self-regulation and also helped to produce sexualities as ‘truths’ about selves that could then be disciplined and governed (and even punished). At the same time, in some of the texts of the early Church dealing with monks and saints’ lives and their extreme forms of self-discipline, Foucault saw a way out of this oppressive regime of policed sexuality and a way in to what he called ‘a manner of being that is still improbable’—a manner of being, moreover, that would offer us ‘an historic occasion to re-open affective and relational virtualities’ that he believed could be emancipatory.

Foucault’s thinking on early Christian saints’ lives has ‘returned,’ in a sense, in some scholarship on the ‘exuberant erotics’ of ancient and medieval saints’ lives—lives, moreover, that portray what one scholar has called the pleasurably ‘violent seduction of sacrifice.’ In Virginia Burrus’s The Sex Lives of Saints: An Erotics of Ancient Hagiography (2004) and Karmen Mackendrick’s Counterpleasures (1999), just to name two studies, the legends of desert hermits, militant martyrs, and self-mutilating mystics are held up as models of a sexualized and ‘queer’ asceticism and radically sublime sites of freedom, and even love.

There has also been some recent work in queer theory that valorizes certain forms of Christian and ‘saintly’ abjections, such as David Halperin’s recent proposal in his book What Do Gay Men Want? (2007) for an ‘upbeat and sentimental’ abjection that would help us to ‘capture and make sense of the antisocial, transgressive’ behavior of gay men without recourse to the language of pathology or the death drive, and which relies for some of its inspiration on medieval Christianity’s rhetoric of humiliation and martyrdom. Halperin puts forward a model of ‘queer solidarity’ (between gay men) built upon an embrace of one’s own social humiliation and abjection as an ‘inverted sainthood.’

The question is finally raised: what kind of ‘spiritual’ work are all of these studies doing (including Foucault’s) with regard to certain ‘medieval’ modes of asceticism, saintliness, the sacred, self-sacrifice, the abject, violence, and love? In my talk, I will explore these questions in relation to Lars von Trier’s film Breaking the Waves, part of his ‘Gold-Heart’ trilogy (also including The Idiots and Dancer in the Dark) in which he sought to portray and even pay homage to the role of the female martyr ‘in its most extreme form.’ As is well-documented, the two primary sources for von Trier’s film were Sade’s novel Justine (1791) and Carl Dreyer’s 1928 film The Passion of Joan of Arc. The fact that the film both puts its primary female character, the ‘holy fool’ Bess McNeill, through a series of terrifyingly self-willed sexual degradations (that ultimately kill her) while also sanctifying her (Bess is, quite literally, turned into a miracle-performing saint at the end of von Trier’s film, escaping the Hell her Scottish village’s Presbyterian elders consign her to at her death) has vexed and troubled critics, who remain distressed over the ways in which the stories’ themes of sadism, masochism, inhuman suffering, self-negation, violence, religiosity, and death are ineluctably enmeshed with what it supposedly means to love, to have ‘faith,’ and more importantly, to be ‘good.’ Ultimately, my talk will aim to highlight the troubling and vexed ways that medieval hagiography inhabits both contemporary queer studies’ interest in the abject and also Lars von Trier’s enduring interest in the supposed ‘sublimity’ of female sexuality, abjection, and sacrifice.
Posted by Eileen Joy at 7:48 PM

Sorry not to hear either of these, Eileen, and I hope Australia lives up to (or dow) its cinematic imaginary. The wooden roller coaster at Luna Park is pretty special, although we have a good Luna Park in Sydney as well (n the harbour, where screams from the rides travel hauntingly across the waves). These papers both sound fascinating -- and intriguing to see you talk about von Trier twice over. When you plan your return visit, which must include Sydney, be sure to let me as well as Lawrence know so that plans can be made.

ej, any chance that these talks will be recorded?
godspede

Hi Melissa: I'm sorry we'll miss each other when I'm in Australia, too, but very happy we'll be working on the Susann book together!

My earlier comment got swallowed... We don't have easy access to recording in the room you'll be speaking in Melbourne, alas. I'll ask Andrew about the Perth one.

Excitement is building here for your visit! Travel safely, and think about what kinds of excursions you'd like to go on. Luna Park? A day trip to the Yarra Valley wineries? wildlife? St Kilda beach? groovy galleries and winebars? a little jazz?

Stephanie: hello! Don't worry about recording equipment--I bring my own! As to things to do in Melbourne: so many choices. Can we do all of them? Everything you mention seems divine: I can't wait.